The BPL champions Bashundhara Kings proved their might again in the domestic season 2021-2022 as they officially ended their campaign with a 2-1 win over Sheikh Jamal Dhanmondi Club in their last match of the ongoing Bangladesh Premier League at the Bashundhara Kings Arena of Bashundhara Sports Complex in the capital on Saturday.

Kings confirmed their hat-trick BPL title by beating Saif Sporting Club by 2-0 goals with two-match to spare in their 20th match in Munshiganj on July 18.

With the day’s feat, the top Bangladeshi outfit collected a total of 57 points from 18 wins, 3 draws and one defeat as well as they made a 13-point lead over their nearest opponents and the runners-up Dhaka Abahani so far. Dhaka Abahani will play their last match against Uttar Baridhara Club today at the Sheikh Fazlul Haque Mani Stadium in Gopalganj at 4:00pm. 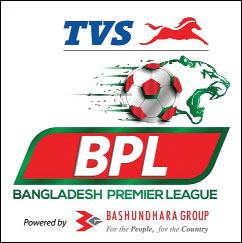 “There are a lot of emotions on the pitch; besides we worked hard a lot for this match because it was also a high-voltage match. We started the season with a lot of adversity, but we have overcome all the problems,” Kings’ head coach Oscar Bruzon told The Daily Sun after the day’s match.

Forward Matin Mia and Kings’ Brazilian captain Robson Robinho scored one goal each for the champions in the 8th and 51st minutes while midfielder Sohanur Rahman netted one for Sheikh Jamal in the 69th minute.

Forward Matin opened an account for Kings scoring his fourth goal of the league with a right-footed shot from the left flank of the box, off a brilliant cross from Brazilian forward Robson (1-0) and Robson sealed the fate of the match by scoring his 17-goal with a powerful shot from outside the box (2-0).

“Our bench is very strong. When we fail to score goals, our substitute players come and score goals. This makes the Kings different from our opponents. It is possible because we did a lot of competitions during our practice sessions,” Kings’ defender Topu Barman told it while asking the club’s secret behind the success.