A new-look Bangladesh national cricket team will be eyeing to leave behind their recent poor performances in T20s and start afresh against Zimbabwe during the opening match of the three-match T20I series at Harare Sports Club in Harare today.

The match is scheduled to start at 05:00pm (Bangladesh Standard Time) and will be telecast live on T Sports.

The Tigers will be without their regular skipper Mahmudullah alongside other senior cricketers – Mushfiqur Rahim and Shakib Al Hasan – during the T20I series against Zimbabwe after the Bangladesh Cricket Board opted to rest the first two cricketers while the latter took a leave due to personal reasons.

In the absence of Mahmudullah, wicketkeeper-batsman Nurul Hasan Sohan will lead a much younger side in the T20I series and he will have a handful of exciting young cricketers such as Parvez Hossain Emon, Hasan Mahmud and Munim Shahriar to fill the vacant positions. 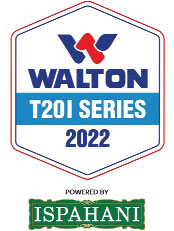 Bangladesh are in search of form in the T20Is since the last ICC T20 World Cup in 2021 as they could only win three matches in the last 16 T20Is while one game ended without a result.

They recently suffered a 0-2 bashing against West Indies while their last victory in this format came against Afghanistan in March this year.

The Bangladesh team management is counting on the series as it will be the start of their preparation for the upcoming ICC T20 World Cup in Australia in October-November this year.

Bangladesh can take confidence from the fact that they have never lost a T20I series against Zimbabwe as in the previous six T20I series between the two sides, the Tigers won three and drew the other three.

The last time Bangladesh toured Zimbabwe they won the three-match T20I series 2-1 on the bank of a brilliant team performance last year and they will surely want to repeat the same feat this time around. Bangladesh even have a better head-to-head record against Zimbabwe as they won 11 out of 16 matches while Zimbabwe won the remaining five matches in this format.

However, the visitors seem to face a tough challenge this time around as the hosts recently won the ICC T20 World Cup Qualifier final on their home soil to book their place in the main event.

The hosts retained almost the same squad that played in the ICC T20 World Cup Qualifier for the series against Bangladesh.

Fast bowlers Tendai Chatara and Blessing Muzarabani will be the ones to miss out through injury. In the duo’s absence, Victor Nyauchi has been brought in to boost the pace attack options.

The remaining matches of the T20I series will be held at the same venue on July 31 and August 2 respectively.

We’re not learning from our mistakes: Domingo

Bangladesh to host U-17 Asian Cup qualifier matches in Oct