The flooding was triggered by torrential rains from second week of May in the north and eastern region, said the minister. Heavy rainfall in the bordering Indian states of Meghalaya and Assam and onrush of uphill waters aggravated the flood situation, he added. 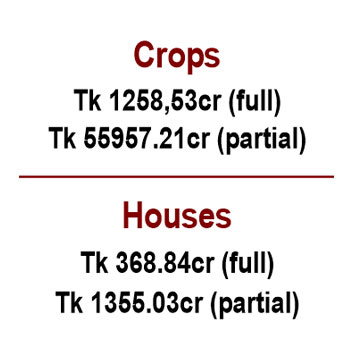 Enamur was talking to reporters following a meeting of an inter-ministerial disaster management coordination committee’ at the Secretariat.

“The water level of Surma was flowing above its danger mark from May 13 due to the torrential rains and onrush of hilly water from the upstream, causing flood in Sylhet, Sunamganj and other adjacent areas which spread to 18 districts of the country,” he said.

Besides, houses worth Tk 368.84 crore have been damaged fully while partially damaged houses worth over Tk 1355.03 crore, he added.

The damages to bridges, culverts, paved and dirt roads, schools, colleges and madrashas, mosques, temples and embankments have been estimated at Tk 86811.65 crore, said the minister.

The death toll from the  floods in the country rose to 129 in the past 24 hours till Monday morning.