Pran-RFL Group, a leading industrial conglomerate in Bangladesh, has set a target to achieve $2 billion export a year by 2030.

The Group currently has an active presence in 145 countries with nearly one thousand types of food and non-food products, said its chief executive officer.

“We want to become a global company with localisation of products. We are working tirelessly to diversify the export of Bangladesh. In the FY2021-22, the Pran-RFL Group export volume stood at $ 532 million,” Ahsan Khan Chowdhury, Chairman and Chief Executive Officer of Pran-RFL Group, told a press conference on Sunday.

Out of $ 532 million, the company earned $ 100 million from its readymade garment (RMG) products and the remaining amount from food and other non-food items. 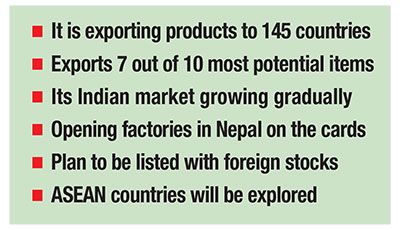 The company organised the press conference styled as “25 years of PRAN-RFL Export: Taking Bangladesh to the World” at a hotel in Dhaka marking the silver jubilee of commencing its exports.

Marketing Director Kamruzzaman Kamal and Head of Public Relations Touhiduzzaman were also present on the occasion, among other high-ups of the company.

The industrial conglomerate is listed with local stocks as the Agricultural Marketing Company Limited (Pran) while the company produces food items under Pran brand line and non-food under the RFL brand name.

“We have planned for foreign listing. When we need more financial support for operations, we have to list the company with stock market. We will gradually expand it foreign market,” the CEO said.

Regarding the global operations, Ahsan Khan Chowdhury said the company started with India market where Pran-RFL Group has an active presence across different states with food and non-food products.

“We are growing gradually in India. We sell all products in India that are available in Bangladesh. Pran-RFL sell products online at Amazon.in and Flipkart. We are trying to join with dmart also and expand our footprints in India in partnership with different outlets,” he said.

PRAN-RFL exports 7 products of 10 top and potential sectors in Bangladesh, that include agricultural products, plastic products, RMG, footwear, light engineering, chemical products and furniture to different parts of the world.

Pran-RFL Group has won the National Export Trophy for 17 consecutive times from the government for its outstanding performance in export sector.

The company has a plan to set up factories in Nepal to meet growing demand of its products in the South Asia and ASEAN region.

“Malaysia is a good destination for Pran-RFL products while the Philippines will be explored to enter the ASEAN region,” the CEO said.

The Group is also performing well in the UAE. Pran-RFL products are available everywhere in the Middle Easter country. It has a good presence in Saudi Arabia, Kuwait, Qatar and Bahrain, according to the Group CEO.

In the United Kingdom, the company targeted the middle class community through local retail outlets like “Poundland” where the people can avail affordable products.

“In Europe, our products have a huge demand. We sell products in Germany, France and Netherlands targeting middle class community in those countries,” said Ahsan Khan Chowdhury.

He claimed that Pran-RFL Group has a capacity to reach products to any parts of the world if the fare of containers will remain within affordable range.

He termed the Islands and countries in West Africa as “emerging territories” for the Pran-RFL products with an increasing consumer base.

“We are also actively doing business in Australia and New Zealand. There is a community named Mauri in New Zealand. Their food consumption is very high than Bangladesh. The company has reached the Oceania countries with food items,” he said.