Bangladesh’s quest to level the three-match T20I series against West Indies is unlikely as heavy rain is predicted at Providence Stadium in Guyana today.

The Tigers are currently trailing the hosts by 0-1 after losing the second game in Dominica by 35 runs. The first T20I between the two sides was washed out due to rain in Dominica.

Bangladesh are keen to turn the table in the shortest format in Guyana and they are also taking some confidence considering they have some sweet memories on the island, winning two out of three ODIs. 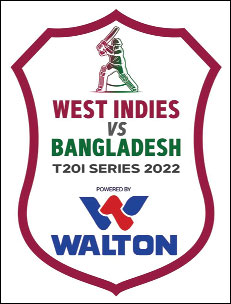 However, according to weather reports, there is a huge possibility of rain in the third T20I and if that is the case, it might hamper the plan of the tourists to make a comeback.

Bangladesh need to play with a more positive mindset considering it was hardly reflected in their last games.

In the last game, they hardly looked to be in the game after they came to bat and made only 158-6 after their opponent hit 193-6.

In the opening game, Bangladesh could only score 105-8 in 13 overs even though they were being comfortably placed (45-2) at one point.

Bangladesh pacer Mustafizur Rahman believed that the visitors fell behind in the shortest format as they failed to recover after being pushed by their opponents.

“Our main problem is the mindset. Even if they don’t score any runs in seven to eight balls, batsmen from other teams bounce back and they keep attacking. In the case of bowlers, after bowling one or two bad balls, they recover very quickly,” Mustafizur said on Wednesday.

“I feel that we fall behind in this aspect. We fall apart very easily and can’t recover from a bad situation quickly,” added.