SHV Energy, a leading global distributor of off-grid energy such as LPG, is set to launch its Bangladesh operations in September this year.

“Bangladesh is a fastest growing market in terms of LPG business. We have been looking into the market for at least 10 years. Now, the market’s leading brand is Bashundhara, followed by Omera, GMI, BM Energy and Petromax. We have an ambition to become one of top three market leaders in the country,” said Niazi during his Dhaka visit.

The Petromax head office is based in Dhaka, the capital of Bangladesh. There are more than 600 employees in the two companies. 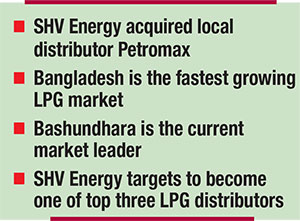 There are two filling plants - one in Mongla (in the south of Bangladesh) which also serves as a terminal for importing LPG and another is in Rupganj, an hour outside of Dhaka.

“Petromax is a nice company. We have acquired 100 percent share so that we become the owner of the company.  We appreciated the value of the company founded five years ago. They are complying with good practices, ethics and other values similar to SHV,” the CEO said.

The officials, however, didn’t disclose the volume of transaction for Petromax acquisition as per the

The international executive thinks the Bangladesh market is immature as many players are coming to business without proper knowledge and safety measures for the product.

Most of its volume is distributed to the domestic segment in which Bangladesh uses 12 kg cylinders for cooking. Petromax also sells to commercial, industrial and auto gas segments.

Bangladesh has over 25 LPG operators and the country's annual consumption is nearly 1.5 million tonnes currently. The amount of LPG consumption was nearly 300,000 tonnes in the fiscal year 2015-16, according to the industry insiders.

SHV was founded in 1896 and, since then, has built its expertise in efficient and safe distribution of energy sources throughout the world.