Bangladesh Garment Manufacturers and Exporters Association (BGMEA) has set an annual export target of $100 billion by 2030. The target would be achieved through diversifying apparel products and markets.

By this time, the sector also eyes to create jobs for 6 million people, said the BGMEA leaders at an event on Tuesday.

At the event, the garment makers' platform also unveiled its new logo with the slogan of “Change”, which represents innovation, circularity and green initiative.

Bangladesh's export earnings for the first time crossed $52 billion in FY2021-22, in which the apparel shipments were alone accounted for more than 81.82 percent or $42.61 billion. The sector registered 35.47 percent growthyear-on-year. 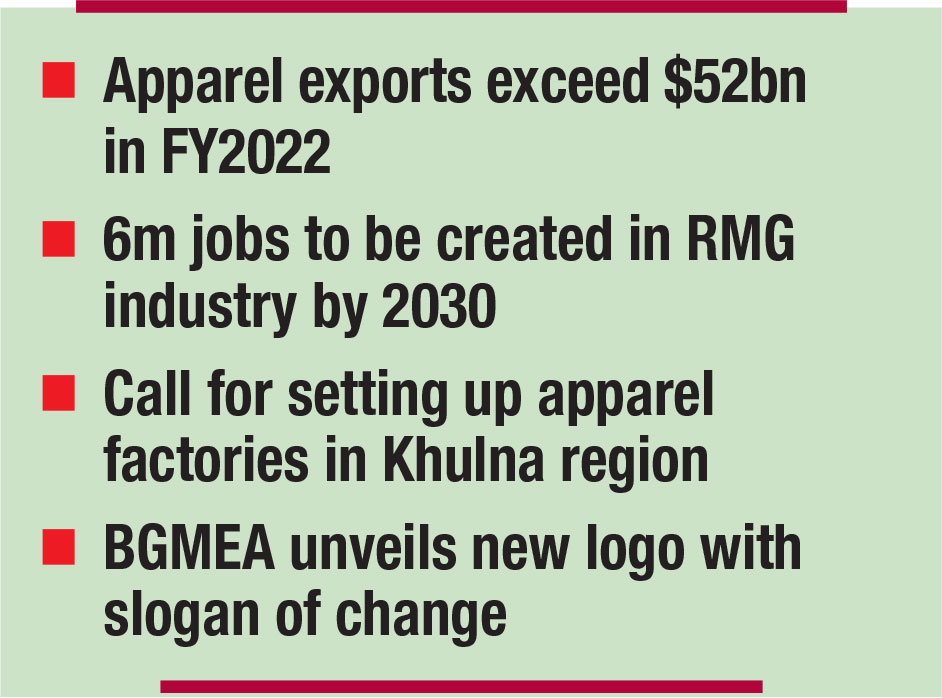 However, the garment makers could not reach the target because of the global externalities in 2016 and 2017, followed by the severe fallouts of the Covid-19 pandemic in 2020 and 2021.

“It is a dynamic logo, which has nine dots that express nine priorities. Each dot has separate meaning,” BGMEA president said.

“With the big change in technology, the RMG industry has also reached a point where traditional industrial norms are not functional,” he added.

“It is out pride that our RMG industry is the second largest in the world and has earned over $42 billion from exports. It is also heartening to see that Bangladesh has crossed $50 billion mark in exports,” Dr Shirin Sharmin Chaudhury said.

“This also testifies that our economy is on a strong footing now. It is no longer a ‘basket case’,” she said, attributing it to political stability that has been maintained for last 13 years.

Hailing the BGMEA’s new initiative, the Speaker hoped that the local apparel exporters will understand the trend of the changing world as it is not possible to go against the demand of globalisation.

Dr Shirin Sharmin Chaudhury also called upon the apparel makers to focus more on climate change issues and sustainable development for better future of the next generation.

Speaking on the occasion, former BGMEA president and a lawmaker Abdus Salam Murshedy urged BGMEA, BKMEA and FBCCI leaders to set up industries in Khulna and adjacent areas to utilise the advantages of Padma Bridge and Mongla port.

He said the south and southwestern region wouldturn into a financial hub of the country in next 15 years.