Bangladesh opener Tamim Iqbal took everyone by surprise with a post on his official Facebook page where he hinted at his retirement from T20 internationals on Monday.

Tamim, who last represented the Tigers in the shortest format on March 9, 2020 and also took a six-month break from T20Is on January 27 this year, wrote ‘T20 International’ with three good-bye emojis on the social media platform.

However, the 33-year-old deleted the post 10 minutes after he wrote it on Facebook which only suggested that he might have made up his mind regarding his T20I future. 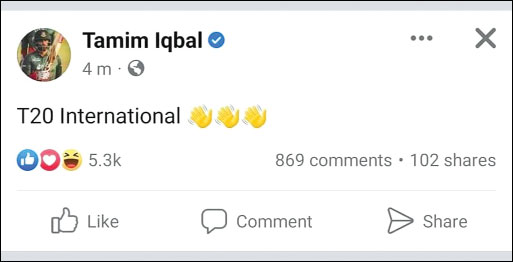 Before leaving for West Indies on June 7, Tamim, the current ODI skipper of Bangladesh, said that he would announce his stance regarding T20Is in time as there was still over a month and a half remaining of his six-month break period.

He is currently enjoying a holiday in the Caribbean while the Bangladesh T20 side is taking part in a three-match T20I series. He is scheduled to join the side in Guyana for the upcoming three-match ODI series, scheduled to start on July 10.