Serena Williams brushed off any talk of retirement on Tuesday by insisting she is "motivated" to play at the US Open later this year despite a shattering Wimbledon defeat.

"The US Open was the place where I won my first Slam, it's super-special. There's definitely a lot of motivation to get better and play at home," the 40-year-old American said.

Williams was speaking after losing in her first singles match for a year when she went down 7-5, 1-6, 7/6 (10/7) to unseeded Harmony Tan, the world number 115, in the opening round of Wimbledon.

The 23-time major winner, who debuted at the All England Club in 1998, refused to speculate on whether or not she will be back at Wimbledon in 2023.

"I am just playing for right now. I see how I feel and go from there.

"Who knows where I will pop up."

Twelve months ago, Williams quit her Wimbledon first-round match in tears after suffering an injury and she had not played singles tennis since until Tuesday.

Doubts had been growing about whether the former world number one -- who has slumped to 1,204th in the rankings after her period of inaction -- would return to the sport. 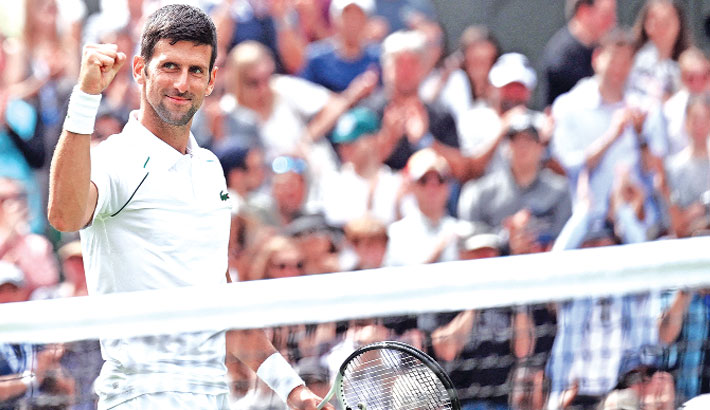 Serbia’s Novak Djokovic celebrates beating Australia’s Thanasi Kokkinakis during their men’s singles match on the third day of the 2022 Wimbledon Championships in London on Wednesday. Djokovic, who is bidding to equal Pete Sampras as a seven-time champion at the All England Club, eased past his 79th-ranked
opponent 6-1, 6-4, 6-2 to move to the third round.     –AFP PHOTO