The long awaited bridge over the mighty Padma River is going to be inaugurated today by Honorable Prime Minister Sheikh Hasina. The bridge connects southern Bangladesh with rest other parts of the country. The bridge connects Mawa and Zajira which are situated in the Munshiganj and Shariatpur districts respectively. Twenty-one districts of the southern region will be connected by the bridge with the rest of the country. The total cost of the bridge is about TK 30,000 crore. The Padma Multipurpose Bridge is considered to be the most challenging construction project in the history of Bangladesh. It is the longest bridge in the country and is also the longest over the Ganges in terms of both span and total length. After commissioning, the Padma Multipurpose Bridge is estimated to boost the economy of Bangladesh by about 1.2 percent of the GDP. The construction of the Padma Bridge has a long, controversial, and complicated history. The pre-feasibility study of construction of the Padma Bridge was conducted in 1999 by the Awami League government. On 4th July, 2001, the then Prime Minister Sheikh Hasina laid the foundation stone for the construction of the Bridge. After a detailed study, the Japanese development partner JICA recommended the construction of the Padma Bridge at the Mawa-Zajira points in 2004.

Since then, little to no progress was made regarding the construction of the bridge during BNP-Jamaat’s rule. However, it regained momentum after the Awami League, under the leadership of Sheikh Hasina, got back state power after the general elections of 2008. The government entered into negotiations with the development partners for securing funding for the construction of the bridge. In early January 2011, a delegation of the World Bank (WB) entered negotiations with Bangladesh on financing the construction of the Bridge. After the successful negotiation, the WB agreed to begin fund disbursement after the project was assessed by its board in the following month. The loan was to have a grace period of 10 years and after that, it would have to be paid back over a period of 30 years with an interest of 0.75 percent. Here, it should be noted that there was other development partners’ involvement in financing the bridge. The other major lenders who had already committed to contribute to the $2.9 billion Padma Multipurpose Bridge included the Asian Development Bank ($615 million), Islamic Development Bank ($140 million) and Japan International Cooperation Agency (JICA) ($400 million). Bangladesh was to provide $600 million from its own resources. Under the said arrangement, the 6.15 kilometer bridge project would have been completed by 2013. The World Bank assessed that the proposed bridge would boost the country's economic growth by 1.2 percent, while there would be a 2.3 percent increase in economic growth in the southwestern region. Moreover, it would help reduce the economic disparity between the impoverished southwestern regions and the more developed central parts of the country. 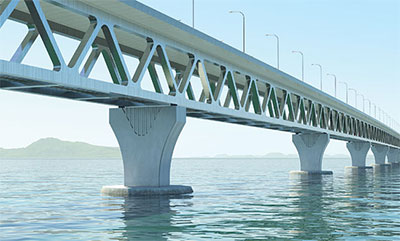 However, the implementation of the bridge project almost became uncertain as the World Bank cancelled its $1.2 billion credit commitment in 2012, stating that it had evidence of a corruption conspiracy involving Bangladeshi officials, executives of a Canadian firm, and certain individuals. The other donors also followed the decision of the WB and decided to withdraw their funding from the proposed project. There is allegation that some Bangladeshis with international clout influenced the World Bank to take this unprecedented harsh decision as their personal interests were not taken care of by the government, violating established norms and regulations of the country. The World Bank began its investigation on alleged corruption in 2010. It later requested the Royal Canadian Mounted Police (RCMP) to take necessary actions based on the evidence they obtained during their own investigations. A court in Canada, after due proceedings, acquitted all the parties charged with corruption because of a lack of credible evidence.

Against this scenario, the government of Bangladesh took an unprecedented bold and courageous decision to fund the project from her own sources. In June 2014, through a due selection process, the China Major Bridge Engineering Company Ltd was selected to construct the long aspired bridge at an estimated cost of US$1.1 billion. The detailed design of the Padma Multipurpose Bridge was prepared by a team of international and national consultants. The project comprised of two phases. Phase 1 included the Design Phase and the Phase 2 the Construction Phase. Phase 1 commenced on 29 January 2009. A key feature of the detailed design was the integration of Bangladesh counterparts into the design team, which allowed the successful training of a significant number of Bangladesh personnel in all aspects of the project and the subsequent transfer of the high level of technological knowledge needed to implement large and complex engineering project. Work on the Padma Bridge was inaugurated in 2015. The first span of the Padma Bridge was laid in 2016. The last span was set up on 10 December 2020.

At long last, the construction of the bride over the sublime Padma River has successfully been completed with Bangladesh’s own funding. Many assessment reports have already suggested that it will have numerous positive impacts on the country’s economy and connectivity with all the regions of Bangladesh. Dhaka's time distance with 21 southern districts will be reduced by 2 to 4 hours. The direct connectivity with the capital will help expand trade and commerce, ease the supply of raw materials, and contribute to industrialization. Small and big industries will be set up in those districts. Agriculture will receive a great boost as the farmers will get better prices for the commodities that they produce. As a result, production will increase. With respect to communication, the bridge will improve the integrated communication structure of the country. The southern part of the country will get connected to the Trans-Asian Highway and the Trans-Asian Railway. Bangladesh will have international connectivity, especially with India, Bhutan, and Nepal. In addition, economic zones, high-tech parks and private industrial cities have already been planned on both sides of the bridge. The other immediate economic benefits would be that the Mongla and Payra seaports will become more operational. The tourism industry will flourish as new tourist destinations will be developed in the southern region that would attract both domestic and foreign tourists. All these initiatives will ensure a flow of capital to those remote areas. As a result, investment and employment will be generated that would help in uplifting the standards of living of the people living in those areas.

Now the Padma Bridge has become a reality. The imposing structure is standing over the mighty river, testifying to the courage of the Prime Minister Sheikh Hasina and the people of the country to take up great challenges in the face of extremely adverse situations. Many detractors both at home and abroad were skeptic about the success of the initiation since the project had to be completed with the nation’s own funding. However, the challenge was met with great success. The other important aspect was that it has been a befitting reply to the national and international detractors and conspirators about the capability of the nation and commitment of the national leadership. It immensely enhanced the self-respect and confidence of the people in their capabilities in achieving an engineering marvel against all odds. The successful construction of the Padma Bridge has elevated Bangladesh’s national pride to a new level that was never seen before. It also improved Bangladesh’s image substantially as a country as it needs to be recognized in the coming years in the international arena for its enormous economic prospects and strategic status.