Reflection on Evolution of Student Politics

Student politics has been an integral part of Bangladeshi society since the colonial days. Over the years, students, primarily those studying at universities and colleges, have actively participated in almost all important political movements that have had profound impacts on the country. The Language Movement of 1952, the popular movement for equal rights in the 1960s which ultimately led to the country’s independence movement and its liberation war of 1971, and the struggle against military rule in the 1980s and the subsequent restoration of democratic rule in 1991 were all possible due to student politics. Political parties to a great extent continue to rely on their student wings to gain and hold on to the power. It is also alleged that many student wings and their leaders have been responsible for some negative impacts on society. With such a strong influence on the nation’s history and current state of affairs, it is worthwhile to reflect on the achievements and challenges of student politics in Bangladesh.

In 1948, then governor general of Pakistan, Muhammad Ali Jinnah, declared that Urdu would be the sole state language of Pakistan. This was met with widespread protests in present-day Bangladesh, as the people of this part demanded that Bangla be declared the state language. Bangabandhu Sheikh Mujibur Rahman played a leading role in this protest movement that contributed to his development as Bangladesh’s paramount leader in subsequent years. Had Urdu become the sole state language, Bengalis would have found themselves in a seriously disadvantageous position as they would have to learn a foreign language for employment and vocation. So, students actively participated in the movement and eventually, in 1952, a number of students were shot dead by the state forces for their protests against the government’s language policy. The sacrifice of the martyrs of 1952 is still remembered as Bangla continues to thrive in Bangladesh. The Pakistani government at the time was compelled to make Bangla one of its two state languages, but this could not have been achieved without the valiant effort of the young and idealistic students of that time.

The 1950s and 1960s were marked by a severe level of discrimination against then East Pakistan as the state’s administrative organs (dominated by Punjabis) adopted and implemented highly discriminatory policies against Bengalis. The 1960s saw widespread protests and demonstrations against the state’s discriminatory policies. Students actively took part in these protest movements and backed the local political parties as they fought to establish the rights of the people of the then eastern wing of Pakistan. In the mid-1960s, Bangabandhu Sheikh Mujibur Rahman declared his famous six-point programme to end the discrimination against the Bengalis by the West Pakistan-dominated administration. Students across present-day Bangladesh supported this movement, helping it be transformed into a major force for equality and justice. In the process, Bangabandhu emerged as the supreme leader of Bangladesh’s independence movement, and students from across the country fought for their rights tirelessly under his charismatic leadership. Unable to suppress the political movement of the Bengalis any longer, the Pakistani government carried out a vicious and ruthless genocide against Bangladeshis in 1971. The entire nation on the call of Bangabandhu resisted this act of horrendous brutality and fought back against Pakistan Army. On 16th December, 1971, Bangladesh successfully defeated Pakistan and won its Liberation War. It has to be acknowledged that effective and principled student politics made a significant contribution to the success of the liberation struggle with their valour and supreme sacrifices. 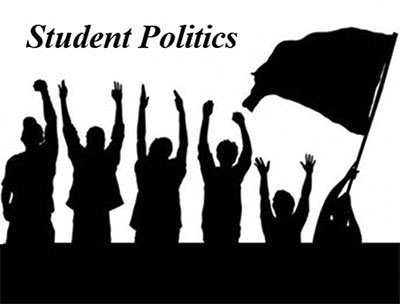 Bangladesh began its journey as an independent nation in the 1970s and this was a period when left-wing politics was quite popular throughout the world. Many students in Bangladesh embraced socialism and leftist principles and ideologies in that period. Many were inspired to establish a just and equitable society. There was also a healthy spirit of internationalism as students voiced their opinions on issues such as Palestinian rights and the Vietnam War. Others were inspired by more radical leftist ideologies and joined extremist left-wing parties and political movements. It caused damage to the nation’s progress as many bright individuals participated in violent political activities, which involved attacking state institutions. Many lives were lost and the political climate of Bangladesh was damaged severely.

In 1975, a disgruntled number of Bangladeshi army officers brutally murdered Bangabandhu and most of his family members. His two daughters were the only survivors among his immediate family. This heinous act led to the establishment of a military junta in Bangladesh under the leadership of Ziaur Rahman. The military would continue to rule the country until 1990, hampering the nation’s development and ruining its political structure. Military rule was marked by poor economic development, a high level of aid dependency, suppression of political freedom, and growing control of the armed forces over state affairs. The Awami League (AL) and other political parties of the time organised a strong resistance movement against General Hussain Muhammad Ershad’s regime in the late 80s to topple the illegitimate government. There were massive protests throughout this decade as Bangladeshis fought against the state’s misrule. Students actively participated in the movement, and the country’s public universities were a hotbed for resistance to military rule. This increasingly weakened the military-backed administration’s hold on power and eventually forced Ershad to resign in 1990. The contribution of students to this victory cannot be understated.

The Bangladeshi economy experienced rapid growth in the 1990s. The political parties became increasingly dependent on their student wings to consolidate and maintain their grip on power. The student wings of all political parties became more involved with politics and the parties relied on them to further their political goals and agendas. With economic growth and expansion, Bangladesh’s wealth increased significantly. There were more opportunities for students to grab a share of this new wealth by maintaining close affiliation with the party in power. The political parties were well aware of the fact that they needed their student wings to keep the opposition at bay, and hence, they allegedly allowed student politicians to engage in corrupt activities with minimal accountability. The move toward a more market-friendly economy also contributed to a decrease in idealism among students, as gain in monetary wealth became the primary attraction for involvement in politics. Even though the quality of student politics deteriorated considerably in the 1990s, students still actively participated in protests and demonstrations and made demands for equity, social justice, safety and security, reduction of criminal activities, greater government accountability and so on.

The 2000s saw a new challenge for Bangladesh as extremism in the name of religion increased drastically. A significant number of young students were drawn to such movements as they sought a means to fight against the injustice committed against Muslim communities in different parts of the world. Radicalisation has led to different forms of violence against which the country still is in the fight. Further economic prosperity also vastly extended the scope to accumulate monetary wealth illegally which, very unfortunately, many students had taken advantage of. There had also been cases of students harassing and abusing other students on public university campuses. These students who hold political power also took advantage of the facilities provided at university dormitories. Bright young minds who wanted to pursue education suffered as a result of these actions. In 2007, during another period of military rule, the army set up a camp on the campus of the University of Dhaka. Military personnel beat up three students of the university due to a dispute over a soccer game. Students subsequently demonstrated against the incident and demanded that the military camp be removed from the university campus. Clashes broke out following the students’ protest. As a result, the military-backed government was compelled to enforce curfews in different parts of the country. The whole incident exposed the fragility of the military’s rule over the country and established that their reign would only be temporary. In 2008, general elections were held in Bangladesh as the country returned to civilian rule, ending the military’s hold on state power.

The 2010s witnessed periods of severe political turmoil in Bangladesh. In 2013, as the trials of some of the most notorious war criminals began, political elements opposing the trials rose up fiercely. Throughout 2013, there were violent protests against the government which paralysed life across the nation. Businesses suffered, the general public’s safety and security were severely compromised, and schools and universities remained closed for lengthy periods of time due to a high degree of political instability and violence. In the first half of 2015, there were long phases of political violence, especially in urban areas, as the opposition party opposed the general election of 2014. The most infamous aspect of these movements was the petrol bomb attacks which terrorised people from all walks of life. With time, abuse of power by student politicians, especially on university campuses, has increased significantly and the vicious murder of a student on the campus of the Bangladesh University of Engineering and Technology by student politicians in 2019 is a stark reminder of the extent to which student politics has deteriorated in the country. It also needs to be said that acts such as the destruction of public and private property, vandalism, arson, and so on during public protests by students are simply unacceptable and this culture needs to change. However, the protest against the imposition of VAT on education in 2015 and the road safety protests of 2018 show that many students are still committed to fighting to bring about positive changes in society. The majority of the country’s student population is still willing to make a positive impact on public affairs and Bangladesh needs to use this potential effectively.

While Bangladesh can celebrate the many achievements of student politics, it must also take necessary steps to eliminate or minimize its negative aspects. Over the years, students have fought for political rights, freedom, democracy, government accountability, equality, reduction of crime, safety and security, economic stability, etc. On the other hand, certain elements of students have been involved with extremist political movements, corruption, abuse of power, extortion, illegal accumulation of wealth, destruction of public and private property, and violent protests. In recent times, idealism has dwindled among the student leaders and activists as they are prioritising wealth accumulation and power over fighting for equality, human rights, and justice. There must be accountability for student politicians. The political parties’ increasing reliance on them makes it very difficult to achieve. A mindset has been created where politics is seen as merely a tool to gain power and monetary wealth whereas it should be seen as a means to fight for the betterment of society. With the country’s rich history of students fighting for moral causes, it can be hoped that the glory of the past will return once again and for that, we need the concerted efforts of all stakeholders, especially the political parties of the country.