Situation in Sylhet, Sunamganj, Netrokona may turn for the worse

Flood has broken all past records in the country’s northeastern region due to the swelling of major rivers caused by continuous rains and onrush of water from Cherrapunji‎ in India’s Meghalaya.

The situation has turned so severe that flight operations at Sylhet Osmani International Airport have been suspended for three days.

Flood victims in Sylhet, Sunamganj and Netrokona claimed that they have not experienced such a disaster in the last 50 years.

The affected people were passing their days amid great misery for lack of food, medicine and shelter though the government has been trying to evacuate them to makeshift shelters and provide them with necessary goods deploying army personnel along with the civil administration.

“The main challenge is to evacuate people and bring them to safety. The army is working alongside the local administration in rescue operations. Prime Minister Sheikh Hasina has asked us to take support from the Bangladesh Navy as well,” said Sylhet Divisional Commissioner Muhammad Mosharrof Hossain.

Local volunteers joined government officials to speed up the evacuation process but they could do little as communications remained snapped after roads were inundated. 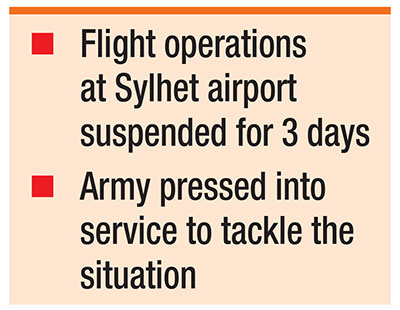 Most of the educational institutions have been declared closed and those have been turned into makeshift flood shelters, and Secondary School Certificate (SSC) and equivalent examinations have been suspended across the country for continuous deterioration of the flood situation.

The deteriorating flood situation has forced the authorities to suspend flight operations at the Sylhet airport.

“Floodwater has almost reached the airport runway. Besides, the airport equipment has been damaged by the floodwater. Therefore, flight operations have been cancelled,” airport manager Hafiz Ahmed said around 4:00pm on Friday.

According to airport sources, five flights were operated at the airport, located about 7km off Sylhet city, from Friday morning to noon.

The electricity supply in entire Sunamganj district and its adjacent areas has been disconnected to avoid accidents as Chhatak and Sunamganj grid substations went under floodwater.

Shefali Rani Saha, a resident of Sunamganj’s Haji Para, took shelter in the first floor of her house.

“I’ve never seen such a terrible flood in Sunamganj in 50 years of my life. The ground floor of my home has been submerged by floodwater since Wednesday night,” she said.

Describing the terrible condition, Shefali said, “I’m failing to cook food for my family members as food items kept in the ground floor got dampened. And all the shops are closed,” she added.

Several upazilas, including Sadar, Chhatak, Doarabazar are now flooded, seemingly disconnected from the rest of the country. Mobile network is also not working in the district.

The crisis of daily necessities and medicines is getting worse as stores have been inundated. The overall support system has collapsed in the affected areas.

Sunamganj municipality Mayor Nader Bakht said, “The entire town is flooded. People are stranded at home. We’re trying our best to rescue them. We need more boats now.”    “We have to take them to safer places, provide them with food and medicines. We’ll stand by them until the flood situation improves,” he added.

According to the Flood Forecasting and Warning Centre, the water of the Surma River was flowing 108cm above the danger level at Kanaighat point in Sylhet at 9:00am on Friday while 70cm at the Sylhet city point and 120cm at the Sunamganj town point.

The Sarigowain River was flowing 23cm above the red mark at Sarighat in Jaintiapur upazila of Sylhet while Puratan Surma River is flowing 2cm above the danger level at Dirai in Sunamganj.

A flood information centre has been opened at the Sunamganj deputy commissioner’s office.

Jahangir Hossain, deputy commissioner of Sunamganj, said flood has broken all past records.

He said the administration will help all those who are unable to stay in their homes in this flood situation, by bringing them to shelters and providing them with temporary food assistance, including dry food.

The DC sought everyone’s help in dealing with the situation.

The water is rising in Sylhet city, too. Houses, shops and offices in different areas of the city, including Shahjalal Upashahar, Teroratan, Sobhanighat and Kalighat, have been submerged, disrupting road communications in the areas.

Nasir Uddin, a resident of Upashahar, said, “Water entered my home on Thursday night and continues to rise. I have my elderly parents and three children with me. If the situation worsens further, I don’t know what to do.”

Earlier in mid-May this year, Sylhet saw its worst flood in 18 years. Most of the 12 upazilas of the district were inundated and electricity, gas and water supplies were disrupted at that time.

Meanwhile, the flood situation has deteriorated in Netrokona’s Kalmakanda, Durgapur and Barhatta upazilas. Numerous roads, houses, businesses and educational institutions were submerged due to rising water.

In addition, fish of over 3,000 ponds and enclosures have been washed away by floodwater.

Heavy to very heavy rainfall was also predicted in the northern and northeast parts of Bangladesh and the adjoining Assam, Meghalaya and Himalayan foothills of India’s West Bengal in the next 72 hours.

The flood situation may worsen further in Sylhet, Sunamganj and Netrokona in the next 24 hours. The Teesta River could overflow the danger level by then. Low-lying areas in Lalmonirhat, Nilphamari, Rangpur and Kurigram may also be flooded due to rains.

The water level will continue to surge in all major rivers in the Brahmaputra-Jamuna and Ganga-Padma basins, including the Surma, Kushiyara, Teesta, Dharla and Dudhkumar, in the next 48 hours. 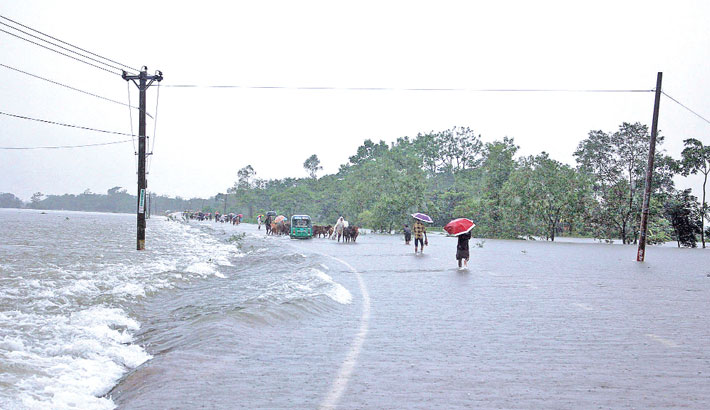 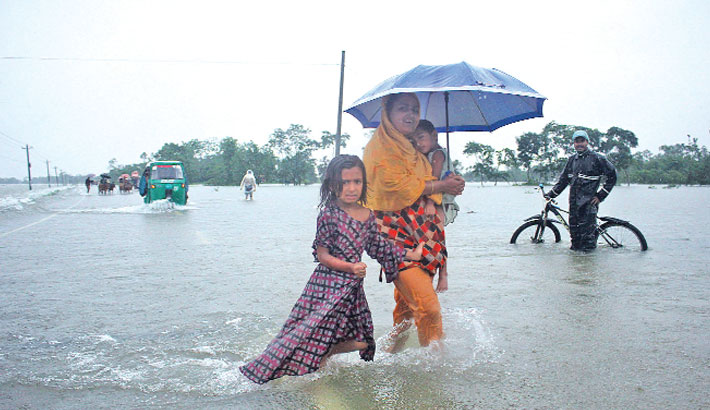 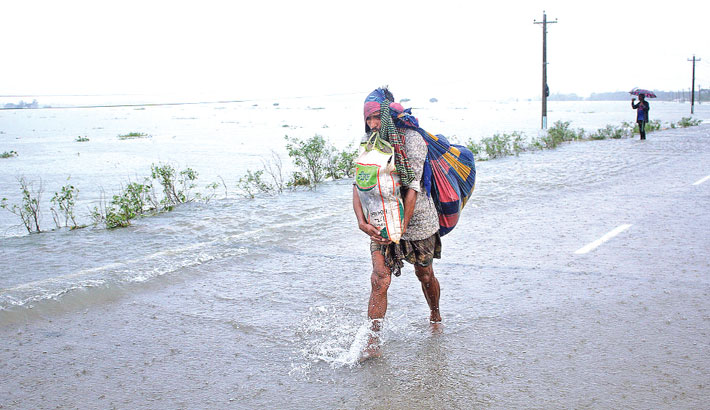 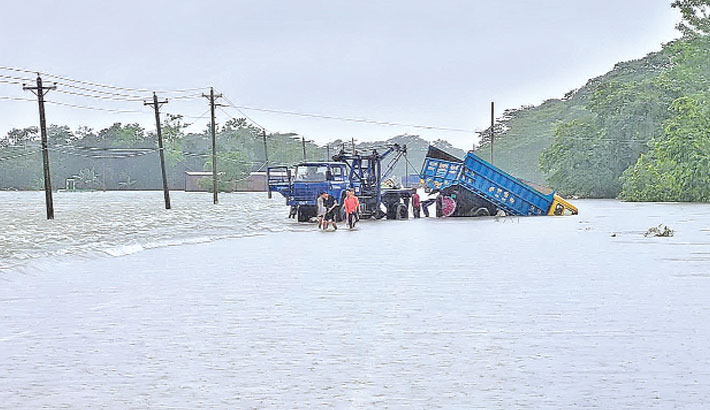 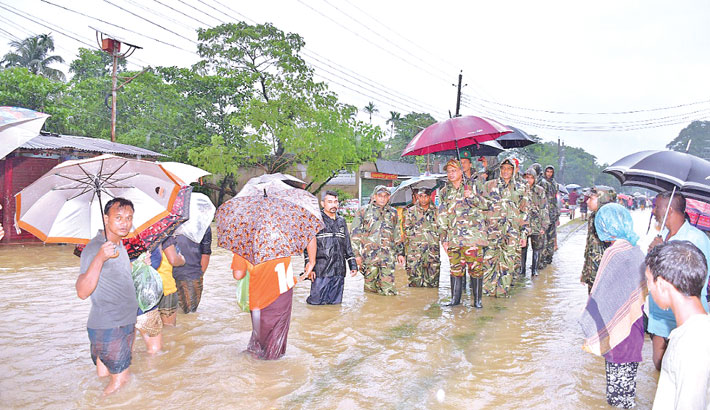 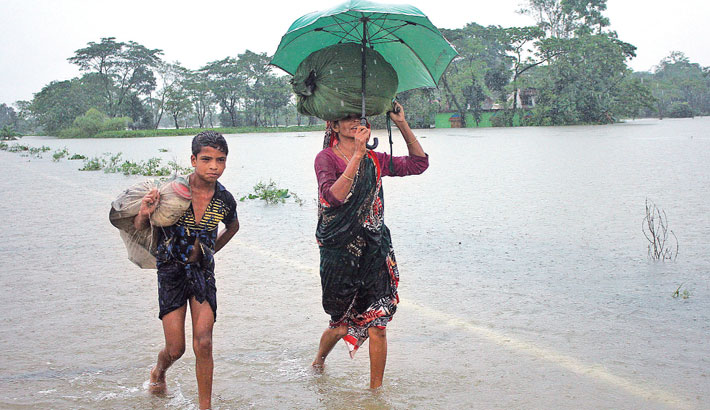 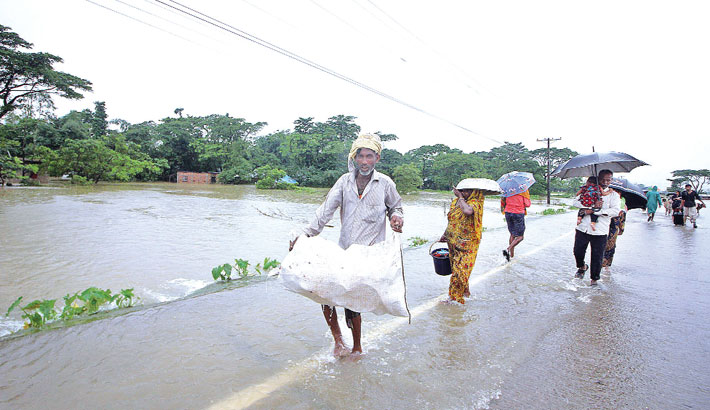 Torrential rain and an onrush from the upstream floods different areas of Sylhet afresh in a span of one month with water continuing to rise,

leading to fears of prolonged suffering of victims.

More and more areas around the river Surma are going under water every day,

Army personnel have been deployed in flood-hit areas to speed up rescue and relief efforts.

The photos were taken  from Salutikar area under Gowainghat upazila in  Sylhet on Friday. 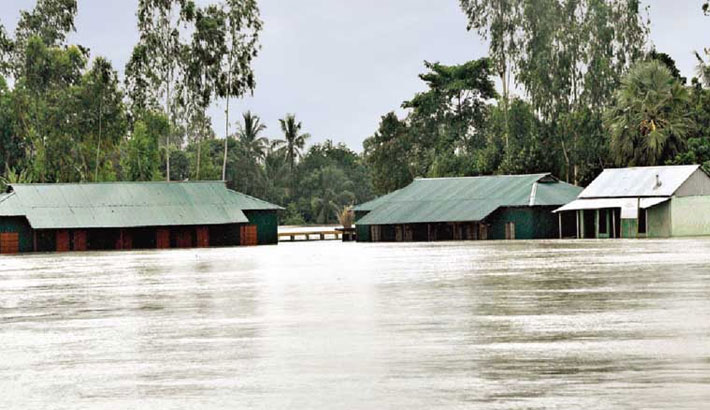 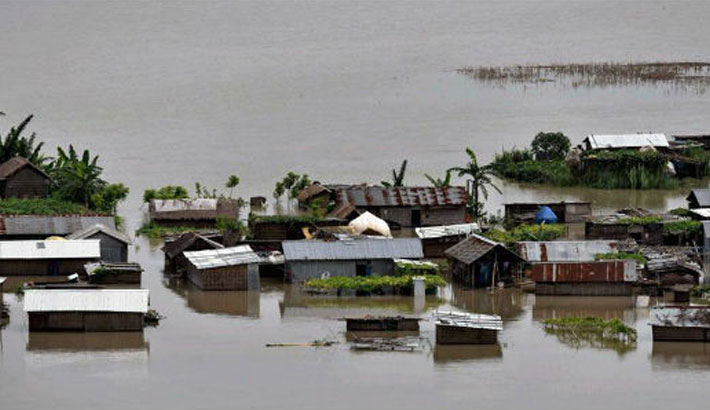