West Indies pacers rattled the Bangladesh top-order by picking up six wickets within 15 overs on the opening day of the two-match Test series opener in Antigua on Thursday. Kemar Roach, who was included in the match only after passing a fitness test on Wednesday, took two wickets to start the Bangladesh innings collapse while Kyle Mayers also claimed two and Jayden Seales and Alzarri Joseph took one wicket each to leave Bangladesh struggling at 45-6. 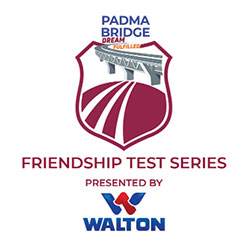 Roach, at first, bowled Mahmudul Hasan Joy (0) in the second ball of the match while he also bowled Najmul Hossain Shanto (0) in his next over after the hosts won the toss and sent Bangladesh to bat first.

Mominul Haque, who stepped down from captaincy to concentrate more on his batting, became the third batsman to get out on zero before Tamim Iqbal and Liton Das provided some resistance.

Tamim, who was 19 runs short of becoming the second Bangladeshi batsman after Mushfiqur Rahim to score 5000 Test runs, achieved the feat during the partnership before he fell to Joseph after making 29 runs.

Liton (12) and Nurul Hasan (0) were then dismissed in the space of three deliveries by Mayers.

Newly-appointed skipper Shakib Al Hasan was batting on 17 along with Mehidy Hasan, who was yet to open his account when the report was filed, as Bangladesh reached 63-6 in 19 overs.