Bangladesh will be eyeing to make a fresh start under their new Test captain Shakib Al Hasan as they take on West Indies in the two-match series opener in Antigua today.

The Bangladesh Cricket Board re-appointed Shakib as Test skipper last month after Mominul Haque decided to step down in order to focus on his batting.

Mominul earlier replaced Shakib as Test captain after the latter received an ICC ban in 2019 and during his tenure, the southpaw managed three Test victories - including the historic one in New Zealand, two draws and 12 defeats in 17 fixtures. 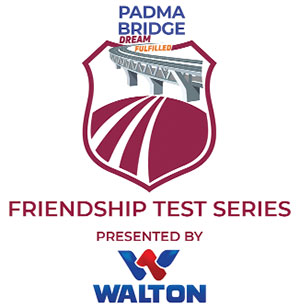 Shakib has had two previous stints as Test captain, during which the team won three and lost 11 in 14 fixtures. He was first appointed Test skipper in 2009 when Mashrafe Mortaza was injured in West Indies.

In 2017, Shakib replaced Mushfiqur Rahim as Test captain and coincidentally he started his second stint as Test leader in West Indies in the following year.

Shakib would happy to forget the tour of West Indies in 2018 as they were embarrassed by the hosts in the opening Test in Antigua.

The visitors were bundled out for their lowest Test score of 43 runs in the first innings and could not manage to get over from it as the hosts swept them cleanly in the two-match series.

Bangladesh Test squad’s strength is weakened to a large extent as their two premier pace bowlers Taskin Ahmed and Shoriful Islam failed to make them available due to their respective injuries.

The visitors’ crisis deepened further as Yasir Ali was ruled out from the Test series after sustaining a back injury while batting against the Cricket West Indies President's XI at CCG on June 10.

Yasir was expected to fill the spot of Mushfiqur Rahim after the latter opted to skip the series to perform Hajj.

However, the Tigers can take confidence from the fact their leading off-spinning all-rounder Mehidy Hasan returned to the squad after missing the home series against Sri Lanka due to injury while they will be delighted to welcome pacer Mustafizur Rahman in whites after a long lay-off.

Mustafizur opted out of the Test contract in 2021 when the BCB decided to introduce a format-wise contract as he was not comfortable with the bio-secure protocol and only changed his stance after being pushed by the board following the injury of Taskin and Shoriful.

The Bangladesh team management is yet to decide whether they will include Mustafizur in the playing XI for the opening Test as they are keen to make sure his workload is managed.

Bangladesh will also be eagerly waiting to see their premier Test batsman Mominul gets back into runs considering his prolonged lean patch is taking a toll on the team.

In-form Liton Das might be relieved from wicket-keeping duties in-order to keep all his energy for his batting considering the team management is mulling the idea of picking Nurul Hasan, who is arguably the best wicket-keeper of the country and furthermore make his way into the tour of West Indies across format on the back of scoring heavily in the domestic circuit.

Meanwhile, the BCB’s Media Committee Chairman Tanvir Ahmed Titu informed on Wednesday that they are hoping that the prevailing dispute among different stakeholders gets resolved to pave the way for the live broadcast of the series.

Less than a day before the first Test of the two-match series between Bangladesh and West Indies, it remains uncertain whether the Bangladeshi fans can be able to watch the games live on TV.

BFF gets 20-acre land to set up ‘Center of Excellence’