The amnesty on laundered money may encourage people to siphon off money from the country and also discourage honest taxpayers from paying tax, the apex trade body said in a post-budget reaction on Saturday.

Federation of Bangladesh Chambers of Commerce and Industry (FBCCI) made the observation at a press briefing two days after national budget for FY23 was announced allowing whitening of the money laundered abroad. 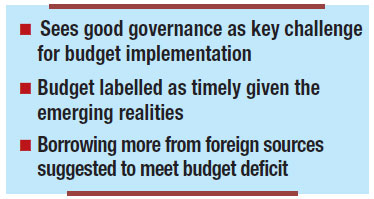 Finance Minister AHM Mustafa Kamal defended this budgetary stance at a post-budget press conference, saying that it was done for the betterment of the economy replicating the examples of some prominent countries.

“Honest taxpayers will consider money laundering the most effective way for tax payment when he or she will see black money whitening is possible with only 7 percent tax instead of the regular rate of 25 percent,” FBCCI president Md Jashim Uddin remarked.

Instead of brining good for the economy, it may rather fuel corruption in the country and discourage people paying taxes at higher rates on their legal income.

FBCCI sees the budget “timely” in the context of emerging realities but says ensuring good governance is going pose the most challenge to its implementation.

“The size of the announced budget is very timely to meet people’s expectation and fulfill the government’s commitment for fighting inflation triggered by Covid and Ukraine war,” Jasim said apart from citing challenges.

FBCCI believes that it is necessary to devise specific plans and directions for gradually improving the quality of oversight, accountability, transparency and efficiency in the budget implementation process.

The positive sides of the budget are increasing employment, domestic investment and food production, continuation of fertilizer subsidy and export diversification, according to FBCCI.

The FBCCI leaders have requested the government to borrow more from foreign sources to meet the budget deficit, otherwise the over dependence on bank borrowing may squeeze scope of loans for the private sector.

The business leaders has sought continuation of revenue policy and a coordination between monetary and revenue policies so that the investors can do business confidently.

They hailed the move for containing imports of fancy items which they said will ease the pressure of rising import bills.

The also called for integration and automation in the tax collection system for increasing revenue collection.

Rawhide traders can reschedule loans with 2pc down payment