CHATTOGRAM: The massive fire triggered by sporadic explosions from chemical containers at Sitakunda container depot in the district has claimed at least 45 lives.

The flames swept through ‘BM Container Depot’ at Kadamrasul in Sitakunda upazila amid the massive explosions that rocked four square kilometres area on Saturday night.

Nine firemen were among the deceased.

Official sources said nearly 300 people, including workers, cops and firemen, were injured in the fire and explosions.

The injured were admitted to private and government hospitals, including Chattogram Medical College Hospital (CMCH) and Combined Military Hospital (CMH) in Chattogram.

Local hospitals were overwhelmed with crowds of people waiting in hallways for treatment. Some of the injured were airlifted to Dhaka. 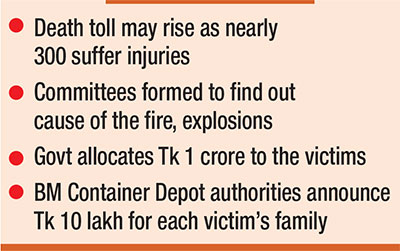 The death toll may rise further as many of the injured were said to be critical, hospital sources said.

Many depot workers said black smoke started billowing initially from a container. The depot staff and workers tried to douse the fire.

But, being failed, they called in firefighters who rushed to the spot and joined the firefighting and rescue operation.

At one stage of the operation by several hundred workers, staff and firefighters, an explosion took place with a big bang from a container.

The people of four square-kilometre areas felt a shake while windowpanes, glasses of doors and different household items were damaged in the horrendous incident.

All the units of Fire Service and Civil Defence (FSCD) department of Chattogram couldn’t bring the fire under control despite their best efforts till Sunday morning.

Later, firefighters from nearby districts, including Feni, Noakhali, Khagrachhari and Cumilla, were called in to join the operation.

FSCD Chattogram Divisional Deputy Director Anisur Rahman said although the fire was brought under control, it was spreading due to the repeated explosions.

The operation appeared as tough for having chemicals at the depot, he said.

A total of 43 bodies were brought to the CMCH morgue till 2:00pm, said ASI Alauddin Talukder of the hospital police outpost.

Different voluntary organiszations, including Red Crescent and Gausia Committee, worked for bringing the deceased and injured to hospitals and providing blood and other medical assistance for them.

Jahangir Alam, an employee of the depot, was admitted to CMCH with burn injuries. While narrating the horrifying experiences, he said a black smoke started emitting from a container.

As firemen started spraying water, the fire was going out of control.

“At one stage, it spread to the adjoining containers. Later, huge explosions started taking place from the containers and the fire engulfed the entire depot,” he added.

“I was staying some 200 feet away from the explosion spot and sustained injuries. My colleagues rushed me to the hospital.”

Covered-van helper Anwar Hossain said he arrived at the depot with goods from the capital in the morning.

“I was sleeping inside the depot. Driver of the van Sohel Rana called me after the fire broke out,” he said.

While visiting the depot on Sunday morning, this correspondent found that containers were burning at different corners of the depot set up on some 24 acres of land.

The fire triggered by explosions left a trail of devastation at the depot. Damaged containers were lying here and there while the office building burnt completely.

“Some 250 workers were working during the accident. Containers for chemical products are kept separately. The total number of chemical-laden containers cannot be said now,” said the manager.

Asked about the reason behind the fire and extent of damage, he said it can be ascertained after investigation.

Nazmul, however, claimed that there was firefighting equipment at the depot.

After visiting the depot, Chattogram Divisional Commissioner Mohammad Ashraf Uddin told reporters that the district administration would pay Tk 50,000 to each family of the deceased and Tk 20,000 to the injured initially.

An inquiry committee will be formed with the representatives from all the departments concerned, he said.

"Anyone from the owner side couldn’t be found at the depot. A team of Bangladesh Army joined the operation,” said the divisional commissioner.

24 Infantry Division GOC Major General Saiful Abedin said army men put barricade on the adjoining canals and drains to resist the chemicals from mixing up with the seawater.

“So, there is no scope of mixing up the chemical waste to the Bay of Bengal,” he said while talking to journalists at the depot on Sunday afternoon.

The army men will work until the fire is brought under control completely,” he said, expecting to get the fire doused by 10:00pm on Sunday.

“The export goods usually arrive there. Chemicals might have been stocked in container for export,” he said.

“A company of Army has also joined the firefighting and rescue operation,” he said.

"I found hydrogen peroxide written on some drums here. Army expert team has arrived. We didn't find any of the owners. We don't know what the containers are containing now,” said the DG.

Meanwhile, the government has allocated Tk 1 crore to the victims of the devastating fire, reports BSS.

"Tk 1 crore in cash and 1,000 packets of dry and other food items have been allotted as humanitarian assistance for the victims of the Sitakunda fire," said an official release.

In another development, BM Container Depot authorities have announced Tk 10 lakh for each of victims’ families.

Moreover, four separate committees have been formed to investigate the terrible fire incident.

The committee was asked to submit a report within five working days.

The committee was asked to submit report within seven days, said sources.

Besides this, Customs Additional Commissioner Shafi Uddin was made head of the five-member committee formed by the Customs House.

On the other hand, Chattogram Port Authority (CPA) formed a three-member committee headed by its terminal manager.

The committees of the Customs and CPA were asked to submit report within seven and three days respectively. 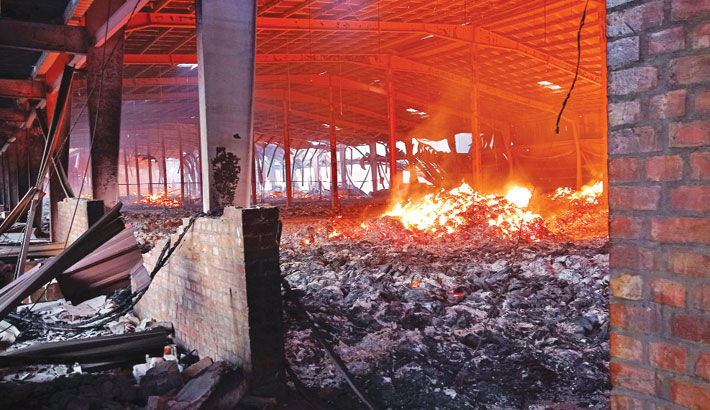 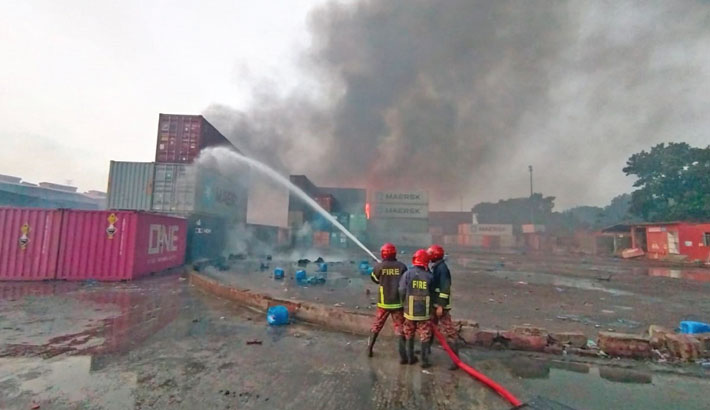 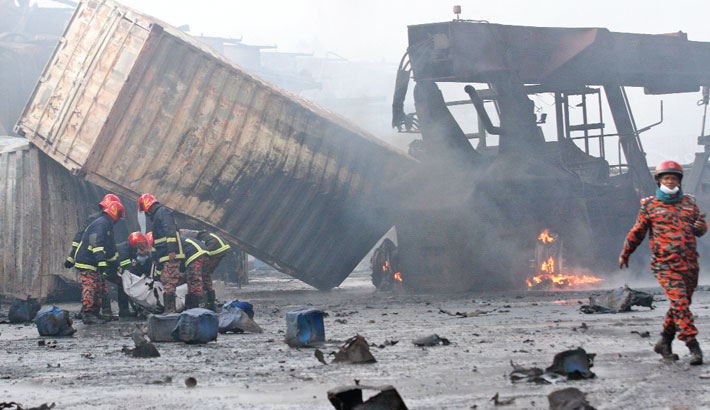 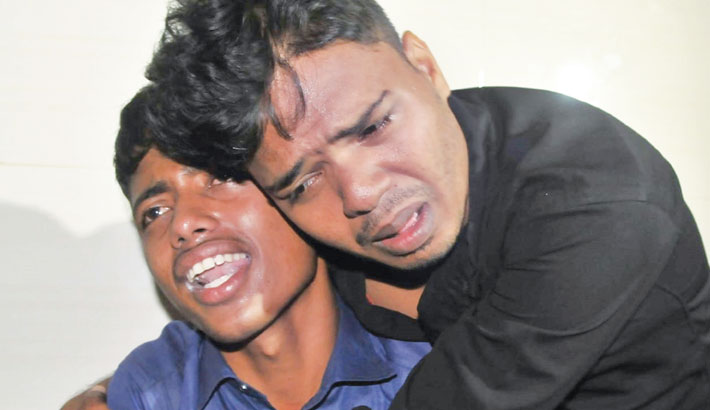 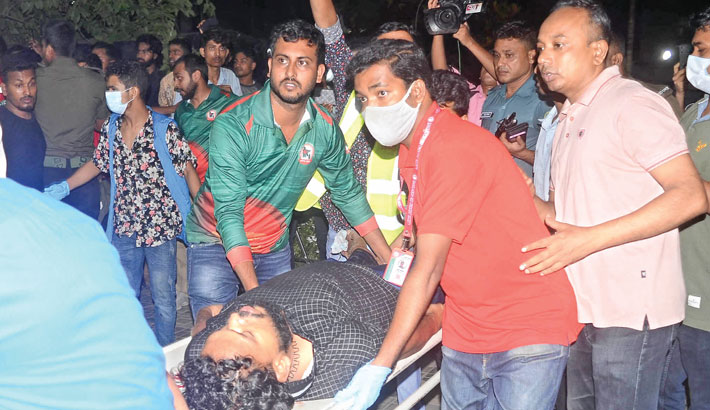 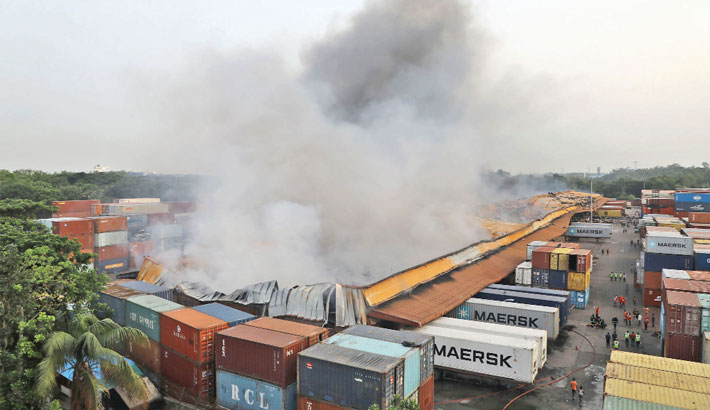 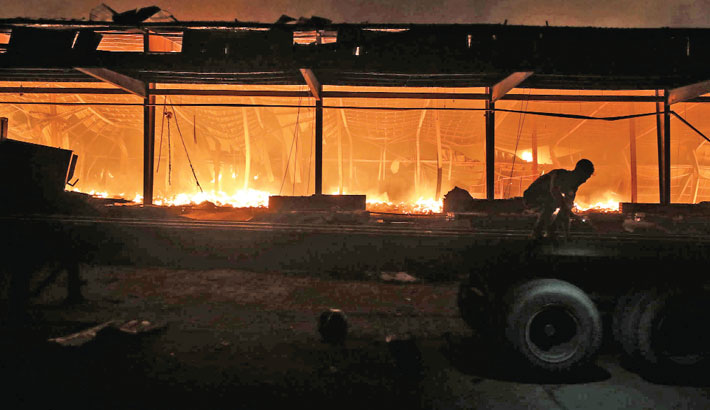 A massive fire has swept through an inland container facility at Sitakunda in Chattogram on Saturday night, triggering a huge blast and multiple chemical container explosions subsequently at the site.

The designated burn unit of Chattogram Medical College Hospital runs out of space to treat those injured in the fire and subsequent explosions at around 10:00pm.

Smoke billows from BM Container Depot after the devastating fire.

The ambience at CMCH premises turns heavy with the sounds of bawling.

The snaps were taken on Saturday and Sunday.