Sri Lanka’s wicketkeeper-batsman Niroshan Dickwella felt that their two-match Test series win over Bangladesh would bring some smiles to the faces of their countrymen.

The island nation is going through tough times in the recent past both politically and economically and the result of 1-0 against Bangladesh in the Test series will surely be a positive thing for the visitors.

“It’s a hard time for us as Sri Lankans so actually we kept it (what is happening back home) behind us as we came here to play good cricket and win the series,” Dickwella told reporters in Mirpur on Friday after the visitors defeated Bangladesh by 10 wickets in the series-concluding Test.

“We want to bring home whatever we could do for them and I think we did it and it’s a good positive thing for us. So it will be a good plus point for Sri Lanka as we are going through a hard time back home,” he added.

Dickwella added that they were well aware that the top-order of the hosts was struggling in the recent past and planned not to leak any runs. He also credited pacer Asitha Fernando for taking a brilliant return catch of Liton Das which he believed was the turning point of the game. 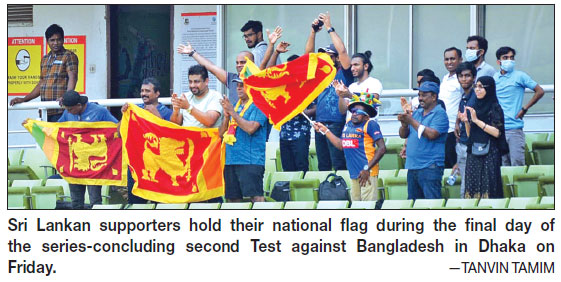 After losing Mushfiqur Rahim, Bangladesh ace-all-rounder Shakib Al Hasan (58) and Liton (52) added 103 runs for the sixth wicket before the latter was removed by Asitha, who also finished with a 10-wicket haul in the match.

“We had a calm dressing room. We knew we were just one wicket away from the tail-enders. We kept our nerves. I think Asitha came up with a brilliant catch. It was the turning point,” said Dickwella.

“We knew the top-order was struggling in the first innings.  We wanted to bowl line and length first. With Asitha’s pace and tactics with the short ball, we knew it would be hard for them. We wanted to spread the field, not to give easy runs and then attack when possible,” he added.