The flood situation in Sylhet district has deteriorated further as the swelling rivers and onrush of upstream water inundated new areas on Wednesday, leaving around 15 lakh people marooned.

Many new areas went under water while roads, government and private offices and educational institutions were submerged by floodwater.

The flood victims were passing days amid great distress in the wake of a shortage of food and pure drinking water.

In Sylhet city, several roads have gone under water with floodwaters entering a number of government establishments as the Surma River was flowing above the danger level.

Sylhet Relief and Rehabilitation Officer Nurul Islam said the local administration has opened a number of shelter centres and food has been allocated for the flood-hit people.

The Brahmaputra-Jamuna and the Ganges-Padma rivers are in rising trend which may continue in the next 72 hours, said the Flood Forecasting and Warning Centre (FFWC) of Bangladesh Water Development Board (BWDB) on Wednesday.

The Dharla, Teesta and Dudhkumar rivers of the northern region are in rising trend, which may continue, it said.

According to the numerical weather forecast of meteorological agencies, there is chance of heavy rainfall at some places of the northern, northeastern and eastern regions of the country along with adjoining states of Assam, Meghalaya, Sub-Himalayan West Bengal, Tripura and Mizoram of India.

The flood situation in low-lying areas of Sylhet and Sunamganj districts may deteriorate, said Arifuzzaman Bhuyan, executive engineer of the FFWC.

The Surma was following above the danger level at Kanaighat, Sylhet and Sunamganj points while Kushiyara crossed the red mark at Amalshid and Sheola in Sylhet, according to FFWC.

According to a BWDB report released in the afternoon, the water level at Kanaighat point of the Surma decreased by 16cm, but it is still 127cm above the danger level.

The Kushiyara River’s water level has risen by 20cm at Amalsid point and was flowing 158cm above the danger level. The river was flowing 53cm above the red mark at Sheola point. 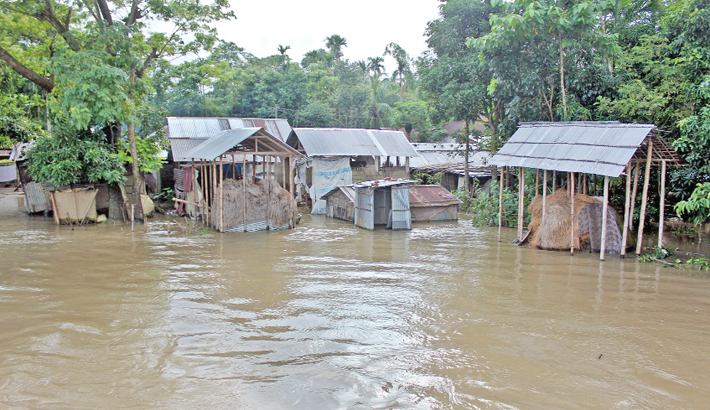