Noted filmmaker Giasuddin Selim-directed movie ‘Paap Punno’ will simultaneously be released in the theatres of Bangladesh, North America on 20 May. 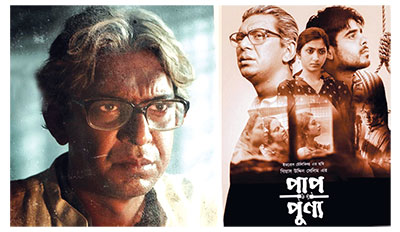 The Impress Telefilm-produced movie will hit a total of 112 theatres in North America, including cinemas of five provinces in Canada and 25 states in USA. This was disclosed at a press conference held at Channel i studio in the capital’s Tejgaon area. Channel i director Jahir Uddin Mahmud Mamun spoke about the details of the films at the press meet.

Actors Mamunur Rashid, Chanchal Chowdhury, Siam Ahmed, Afsana Mimi, among others, were present on the occasion.

Earlier, pioneer international distributor ‘Swapno Scarecrow’ announced that ‘Paap Punno’ is slated to become the first Bangladeshi film to be simultaneously released in Bangladesh and over hundred theatres outside the country.

After the tremendous success of ‘Monpura,’ Giasuddin Selim again teamed up with eminent actor Chanchal Chowdhury in ‘Paap Punno’.