SHEIKH HASINA THE BEACON OF HOPE

Father of the Nation Bangabandhu Sheikh Mujibur Rahman returned home with a victory wreath. In a tearful voice, he said, not as a leader, but as a brother, I am telling my countrymen, if our common people do not get shelter, food, and the youth do not get jobs, our freedom will fail- will not be fulfilled.

Bangabandhu wanted to build a ‘Sonar Bangla’. But on August 15, 1975, a group of military and civilian assassins killed him and his family. Through this heinous murder in history, they are engaged in a conspiracy to make the country a new Pakistan. They did not leave out murder, rape, looting, arson, imprisonment, or oppression. From village to town, the same image, the same torture, the same military-civilian assassination cycle continued. Their main target was Awami League leaders and activists, Mujib-loving people, especially relatives and kin of Bangabandhu Sheikh Mujibur Rahman.

Sheikh Hasina came to Bangladesh on May 17, 1981, at the risk of death in such a horrible situation. Ignoring the barricades of the ruling group and heavy rains, millions of people rushed from villages, towns and ports that day. In that historic moment, in a tearful voice, Bangabandhu's daughter said, “I have come to you after losing my parents, my youngest brother Russel and everyone. I find them among you. I want to put a smile on the face of the miserable people of the country by implementing Bangabandhu’s ideals in the way he directed. I want to bring socio-economic and overall liberation to the Bengali nation.”

Sheikh Hasina started her struggle in that difficult and unfavourable way. Challenging the domestic and foreign conspiracies and the power of the dictator, she has reached the villages of Bangla with a view to mobilise people. She overcame innumerable obstacles and overcame the conspiracies of the assassins. She lived a life of captivity, but she has not lost her morale; she has remained steadfast in her goal. The freedom-loving people of Bangla and the Mujib-loving people have stood by her risking their lives, soaked her in respect and love, and given her the mandate to become the Prime Minister in 1996.

She has also kept her promise. Sheikh Hasina is the first in the history of the country to take many humane steps, including ‘old age allowance’, ‘allowances for the widow, deserted and destitute women’, ‘indigent freedom fighter allowance’, ‘shelter project’, ‘housing’, ‘ideal village’, ‘one house one farm’ programme. As a result, groundbreaking success has come in economic development as well as human and social development of the country. 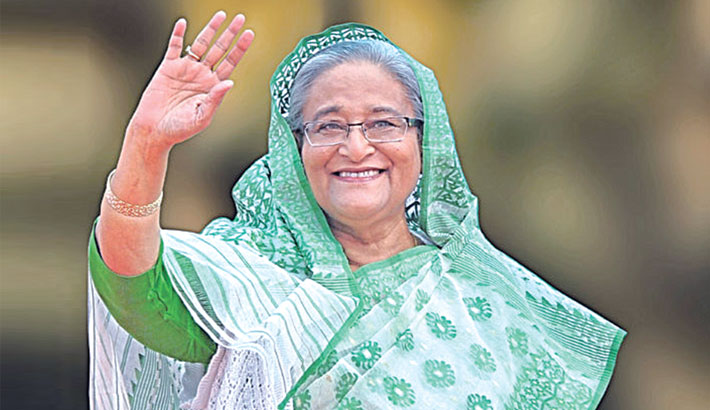 Before Sheikh Hasina became the prime minister (1995-96), the poverty rate in the country was 41.5 per cent. Under her tenure, the poverty rate has come down to 20.5 per cent. She has also given importance to the rights of disadvantaged people during times of disaster in the country. Under her direction, 9 lakh homeless families are being provided with houses at the government's expense through the Ashrayan Project.

When the World Bank cancelled fund allocation for the Padma Bridge project in 2013 bringing an allegation of corruption, Prime Minister Sheikh Hasina counter-challenged the World Bank and said that the Padma Bridge would be built with the country's money. Sheikh Hasina has won that challenge and Bangladesh has achieved success due to her initiative, courage and motivation. This capacity of Bangladesh is not limited to economic figures; it has given new confidence to the people of the country, especially the present generation. The image of Sheikh Hasina and Bangladesh has been rejuvenated in terms of honesty and efficiency. In a study by the international organisation “People and Politics”, Sheikh Hasina has been recognised as one of the most honest rulers of the world in 2017.

Sheikh Hasina is a writer, editor, researcher and philosopher. She reads regularly and prays. Despite being the daughter of a former prime minister and president of Bangladesh and the prime minister herself, she lives like an ordinary Bengali woman. Many leaders and activists and bureaucrats have become accustomed to her philosophy regarding discipline, politics, life and governance. The anger, sorrow, joy, pain, humiliation, stubbornness, ego, restraint, dream, resistance, determination, all resonate in her behaviour, mannerisms and actions.

During the rule of Sheikh Hasina, the humanitarian activities of the state have increased, the poverty rate has decreased and the country has gained the status of a developing state. Her thoughts, policies, theories, philosophies and the theory of development through joint efforts have given a new horizon to the world. Sheikh Hasina has repeatedly said, “It is the love and desire of the people, which has made me the prime minister of the country. The only goal of my life is to serve the country and the people and to materialise my father's dream of establishing ‘Golden Bengal’.” The people of Bangladesh also think that Sheikh Hasina is an honest and capable leader, a symbol of greater unity of the society, the best guide and a patriotic humanitarian ruler. This is the long path of struggle she has crossed and the success she has achieved since her coming to the country on 17th May 1981.

The writer is an education and development specialist