Awami League President and Prime Minister Sheikh Hasina has directed her party’s senior leaders not to confuse people over opening of Padma Multipurpose Bridge to traffic.

She came up with the directive at a meeting of the Awami League Central Working Committee (ALCWC), the highest decision-making body of the ruling party, held at Ganabhaban on Saturday evening.

The premier hinted at opening the country’s largest bridge by June through a grand inauguration programme, but did not disclose any date, they said.

“Why would the responsible persons make different comments on the opening of the bridges,” a senior AL leader said on condition of anonymity.

He further said despite the repeated demand of senior leaders to disclose the opening date of Padma Bridge, the Prime Minister refrained from announcing the date. 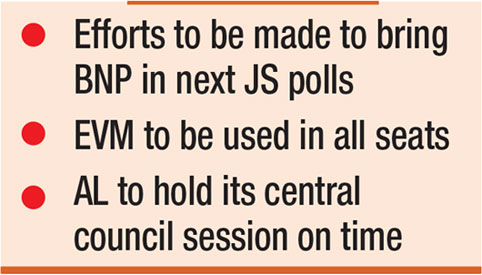 The issue surfaced again as the important persons of the government has made dissimilar statements over the deadline of opening the bridge.

The road transport and bridges ministry said in a statement on April 4 that the bridge would be open in June.

Cabinet Secretary Khandker Anwarul Islam blamed the Ukraine-Russia war for the delay in the shipment of goods heavily and a reason behind the change in deadline.

Later on April 18, Padma Multipurpose Bridge project director Shafiqul Islam said the bridge is likely to be opened in June this year as they completed 92 percent of its construction work by now.

On Friday, Road Transport and Bridges Minister Obaidul Quader reiterated that the Padma Bridge is on track for inauguration in June in keeping with a previous announcement as the date for the inauguration of the bridge has not been deferred.

Meeting sources say that apart from the Padma Bridge issue, many important issues, including taking preparations for the next general election, bringing Bangladesh Nationalist Party (BNP) to it and use of Electronic Voting Machine, were also discussed.Besides this, the meeting also discussed council sessions of Awami League and its associate bodies before next triennial council session of the party.

The sources said that a decision has been made to make all-out efforts to bring BNP to the next general election, where the AL will participate in the polls with its 14-party alliance.

“We want all political parties to carry out meetings and rallies in a peaceful manner. We will create an environment so that every party can contest the next election in a participatory manner,” an organising secretary said.

Criticising some senior leaders of the party for taking side against the party candidates in the recently-held local body elections, the Prime Minister hinted at the next election will be held through using EVMs.

“So you have win you own your popularity and merit. Only AL ticket will not help you,” he said.

Surveys on popularity of AL leaders are being conducted in all the constituencies across the country. Party tickets to be given to those popular leaders in the parliamentary elections slated for the first week of 2024.

Before the next council session of the party, council sessions of its associated bodies, including Bangladesh Chattra League, Jubo Mohila League and others expired-bodies, have to be completed.

Talking over rebels, the Awami League president urged her party leaders to take action against them.

She also directed party leaders to complete all the grassroots council so that no rebels and associates of dissidents can get posts.

Even, she urged leaders to keep those people out of the council preparatory committees.

The AL chief also directed party leaders to prepare an election manifesto, declaration and constitution from now on.

Over the outcome of Saturday’s ALCWC meeting, Quader said party President and Prime Minister Sheikh Hasina directed the party leaders to organise AL ahead of the next general election and the conference of the party.

Referring to the AL president’s directives about the opposition's meeting and rally, he said, “We will not obstruct the meetings and rallies of the opposition. Let them do it freely. There is no need to create hindrance from us.”

“We are getting ready for polls. Welcome those opposition parties which will join elections. Polls will be held in a free and fair manner under the Election Commission,” Quader said.