Pacer Al-Amin Hossain claimed 6-31 to help Legends of Rupganj earn a consolation eight-wicket win over Sheikh Jamal Dhanmondi Club during their last round super league match of the 2021-22 edition of the Bangabandhu Dhaka Premier League in Mirpur on Thursday.

In-form all-rounder Chirag Jani also finished with 2-26 as Rupganj bowled Sheikh Jamal all out for just 116 runs in 34.4 overs after sending the winners of this year’s competition to bat first. 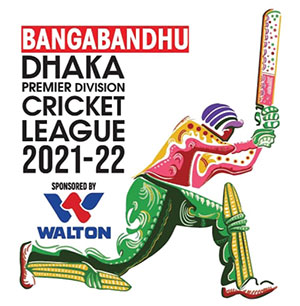 In reply, Rupganj reached 120-2 in 25.1 overs after Raqibul Hasan and Sabbir Rahman made 40 not out and 36 runs respectively. 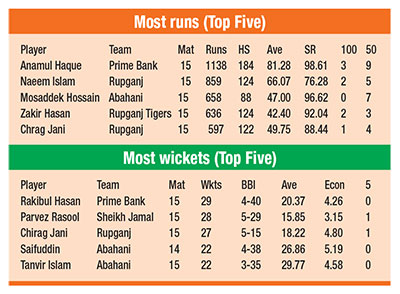 The defeat, however, couldn’t deny Sheikh Jamal from celebrating their maiden DPL title victory as they confirmed the championship in their previous game against Abahani Limited.

Rupganj finished the tournament as runners-up with 22 points from 15 games – two points short of Sheikh Jamal.

Meanwhile, in the day’s other match, at the BKSP-3 venue, Tamim Iqbal struck his successive hundred in the ongoing edition (137 off 132 balls) while in-form Anamul Haque also made 96 runs as Prime Bank Cricket Club defeated Gazi Group Cricketers by 78 runs.

Opting to bat first, Prime Bank posted a mammoth total of 355-7 in their stipulated overs before they bowled out Gazi Group for 277 runs in 47.5 overs to finish the league in the third place.

Saifuddin scored an unbeaten 62 off 41 balls to power Abahani score 275-9 in their 50 overs after deciding to bat first before he claimed 4-38 to bowl the opposition all out for 212 runs in 45.5 overs to finish the tournament on a winning note.