Brothers Union will play the relegation zone matches alongside Khelaghar Samaj Kallayan Samity after both the teams lost their respective penultimate round matches of the ongoing Bangabandhu Dhaka Premier Division Cricket League 2021-22 on Tuesday.

Khelaghar lost to Shinepukur Cricket Club by four wickets at the BKSP-3 venue while Brothers Union conceded an 83-run defeat to Legends of Rupganj at the Sher-e-Bangla National Stadium in Mirpur. 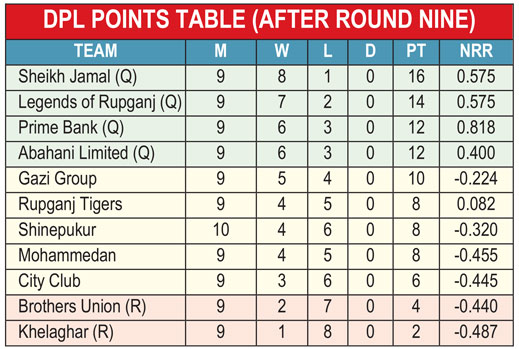 Alauddin Babu claimed 4-45 while Ripon Mondol took 2-39 as Shinepukur restricted Khelaghar to 216-8 in their stipulated overs after deciding to bat first. Amit Majumder made the highest 57 runs for Khelaghar.

Shinepukur, in reply, reached 220-6 in just 31.3 overs to finish the league stage with four wins in 10 matches after Avishek Mitra and Tahjibul Isam made 62 and 40 runs respectively.

The win of Shinepukur also all but confirmed their avoiding relegation zone hassle as they still have a better net run rate than Mohammedan Sporting Club and City Club, which still have one match left each in the league stage.

Naeem Hasan’s flamboyant run in the ongoing DPL continued as on Tuesday he struck 45 runs and also took three wickets to help Rupganj clinch their seventh win in the ongoing meet and moved to the second spot in the points table.

Apart from Naeem’s innings, Sabbir Rahman also scored 46 runs but a disciplined bowling performance by Brothers’ bowlers forced them to get all out for just 168 runs in 44.1 overs after being sent into bat first.

Ifran Hossain finished with 4-32 for Brothers.

Brothers, in reply, also faced the wrath of Rupganj bowlers and were bowled out for just 85 runs in 22.2 overs to suffer their seventh defeat in the ongoing meet.