PATUAKHALI: Prime Minister Sheikh Hasina on Monday called for national unity to ensure the country’s march towards development and prosperity.

“In all work we have to remain united and have to continue it. If we can do it, Bangladesh will never ever go backwards again,” she said after opening the country’s largest thermal coal-fired power plant at Payra of Patuakhali district to add 1320 MW of electricity to the national grid, reports UNB.

In a double delight for the nation the PM also marked the occasion with a proud declaration of the country's 100 per cent electricity coverage.

This milestone achievement puts Bangladesh ahead of India and Pakistan among the South Asian nations to light up every house with electricity.

“It’s a gift from me to the people of the country ahead of Ramadan and the holy Eid-ul Fitr,” she told the cheering audience at the plant site.

Matching with the capacity of the plant, a joint venture between Bangladesh and China, Hasina released 1320 pigeons before formally switching on the station.

From the jetty of the plant she waved at a parade of 200 flag-waving decorated boats sailing past her on the Payra River.

In her speech, first in-person since the outbreak of Covid-19 pandemic two years ago, the prime minister recalled 15th August tragedy. 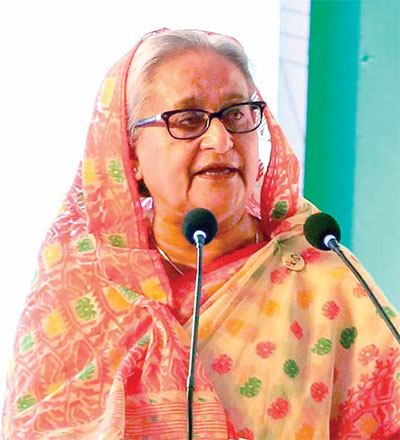 She narrated in a choked voice how she overcame the pains of losing her loved ones on that black night to work hard to materialise the dreams of the Father of the Nation to make every citizen happy.

Hasina said that Bangladesh’s engineers have gathered huge experience and skills through working in various mega projects and they themselves will have to implement the country’s big projects in the coming days.

She said that the country has started its forward march defying all odds and hurdles since 2009.

“Father of the Nation Bangabandhu Sheikh Mujibur Rahman gave us Independence and he wanted to bring smile among the poor people through establishing ‘Sonar Bangla’ (Golden Bengal). We will build that ‘Sonar Bangla’. That’s our promise and that’s our goal,” she said.

Hasina said for the last 13 years a democratic system has been working in the country.

“There had been so many hurdles, so many obstacles during this period. But we overcame those and continued our democratic process. For this, Bangladesh is now on the highway of development,” she said.

“I had pledged to illuminate every house and person, and we have started our journey on the path of light,” she said.

“Today is that day when the country has successfully started its journey on the path of light,” she said.

She thanked all for their all-out cooperation.

She said that Bangladesh has now achieved self-sufficiency in food production and the government is setting up 100 economic zones where employment opportunities will be created.

She also said that the government has built numerous roads and bridges in the southern region of the country which always remained neglected.

Hasina said that her government is providing home and land to the homeless and landless people through Ashrayan Project.

She urged all not to leave a single inch of arable land uncultivated.

“Not a single inch of land will be left without cultivation. Everyone will have to produce crops, whatever it is, in their respective land whatever the size is. If it is a green chilli plant, it is also ok,” she said.

Everyone will have to produce something at least, she said.

The PM also asked all to remain beside the farmers.

She also thanked the leaders and activists of Awami League, Jubo League, Swechhasebak League, Chhatra League and others for their cooperation in paddy harvesting during the pandemic period.

On her arrival, the prime minister was given a guard of honour. She went round the plant and visited its central control room.

A documentary on the development of the power sector was screened at the programme.

Three to walk gallows for war crimes in Moulvibazar