Warnie Is No More!

The year was 1996, the cricket world cup year. That tournament was staged in India, Pakistan and Sri Lanka, although for security reasons, England, Australia and West Indies refused to play their cricket in Sri Lanka. Anyway, that world cup introduced me, a 9-year old boy, to two legends: Sachin Ramesh Tendulkar and Shane Keith Warne, who died of a heart attack in a villa in Thailand on 4 March 2022.

Warne’s followers, colleagues, friends and families are in shock at the moment. Nobody could foresee Warne’s premature death. According to media reports, he did not have health complications. Although rich and famous, he called himself a lonely single man looking for a healthy relationship. Warne, also a popular broadcaster, could not stop binge-drinking and smoking till his death.

My elder brother used to call him “Sheni Warni”. I used to wonder who that player is. I got to know him well after watching him bowl against Tendulkar in the 1996 world cup. Tendulkar took him to pieces that evening. Australia won that match against India, but there was something about Warne which would create a sense of wonder in me. 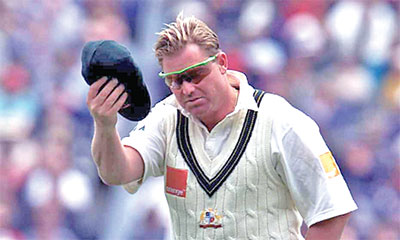 When Warne came on to bowl, he would attract immediate attention. I would try to mimic his way of tossing the spinning ball with his right hand and catching it with the left hand. Before he delivered his ball, his eyes would lit up as if he were a wounded tiger who had targeted a prey and would attack him in a stealthy but vicious manner. Although Muttiah Muralidharan was the highest wicket-taker in the world, readers should not forget that he played many of his crickets in spin-friendly Sri Lankan conditions. Moreover, his controversial action did not win him any favour. He was accused of chucking and was no-balled several times in Australia, one being the famous walkout of the Arjuna Ranatunga-led Sri Lanka team against England in 1998. On the other hand, Warne’s bowling action was as clean as a weasel. He had plenty of tricks up his sleeves. He could bowl flippers, wrong-uns, leg-spins, finger-spins, fasting balls and whatnot. Warne was famous for playing on the minds of his opponents. He would call the baby-faced English cricket legend, Ian Bell (Sherminator) because of his apparent resemblance with the fictive character from American Pie. Warne would call his sledging of opponents “banter” or “the chin music”.

Warne was never shy of controversies. In 1995, he and his teammate, Mark Waugh were fined for leaking information on team combinations to Indian bookies. The duo were largely reprimanded by the media for their deplorable actions. Because of  taking a banned substance, Warne was not allowed to take part in the 2003 cricket world cup. Warne later revealed in the press conference that his mother gave him a tablet to lose his weight, but he did not know that the medicine was on the list of a banned substance.

Moreover, Warne, as many would say, is unlucky for not being officially announced as permanent captain of Australia. Many say that if had ever got responsibility, he would have become the best ever captain for Australia. The reasons for which the Australian Cricket Board could not appoint him as a captain was because of the manner in which he conducted himself off the field. He loved sexting women. He did not put any embargo on himself. He let his emotion overpower his rationality.

Warne had been living alone since his 10-year marriage with his wife Simone Callahan ended in 2005. Warne talked of being lonely after his playing days were over in 2014. He played till he was in the mid 40s. His most high-flying affair after his divorce was with Elizabeth Hurley, British model and actress, former fiance of Hollywood Actor Hugh Grant. Warne was engaged to her for three years. After a few years of a breakup, Warne talked of being the happiest when he was with Hurley. However, he reasoned that the physical distance they could not but have because of professional commitments had created a distance between them. For many years, Warne remained single. He was always looking for a piece of settlement, but could not cement a long-lasting relationship to keep himself going.

Finally, I will miss Warnie. I do not know what mental demons he had to battle with. Why did he die so young? Did he hide any underlying medical conditions? Finding answers to these questions will remain a mystery. Four days ago, I watched his interview on Fox. There, he lampooned the Australian selectors for harshly treating the former Aussie coach and cricketer, Justin Langer. Warne looked fit and healthy. In the end, Warne lived a charmed life.

Sharne Warne (1969-2022) is survived by his three children Jackson, Brooke and Summer.

The writer is a lecturer, department of English, School of Liberal Arts & Social Sciences (SLASS), CIU