“Sweden agriculture” is another name for Jum cultivation. The cultivation process is originated in Sweden, so it is called Sweden agriculture. Jum cultivation is the most common traditional farming method in the hilly areas of Bangladesh. It is very close to the hearts of hill communities. It blends in with their culture. Most of the tribal communities in the remote areas consider it as their source of livelihood. Many crops are cultivated in one hill at the same time. That is why they call it “food bank”.

Jum cultivation has been practiced in the hills since ancient times. At present, the productivity of Jum cultivation has decreased manifold due to various reasons. As a result, the hills are leaning towards permanent orchards. This is a positive aspect. In order to ensure food security, it is important to ensure that not even an inch of land is left vacant as per the directives of the Hon'ble Prime Minister and also to increase the productivity of agriculture. The same is true for Jum cultivation. 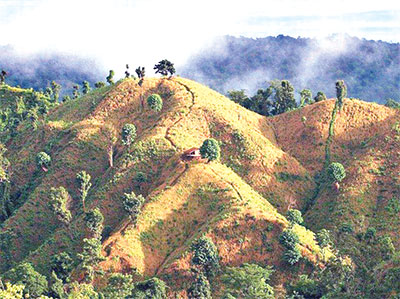 There are several reasons for the decline in productivity of Jum cultivation. These include the loss of soil fertility in the hills, repeated Jum cultivation in the same hill over a short period of time, non-availability of improved seeds, lack of modern ideas or opportunities for proper seed production or storage and lack of invention of modern methods of fertilisation or the use of fertilizers in the traditional way.

Since many types of seeds are sown in the same hole in the same hill in Jum cultivation, no integrated method has been developed to control the diseases and pests of the crop grown. Excessive rainfall and occasional extreme drought are responsible for low yields.

The total area of the three hill districts (Bandarban, Khagrachhari and Rangamati) is 13,295 sq km. Among them, about 5,480 sq km of hills are under Jum cultivation. Jum crops are cultivated on sloping hills outside the protected forest. This is called shifting cultivation as it is cultivated by changing the hills every few years (now 1-2 years). It is also called slash and burn agriculture as the forest has to be cut and dried before cultivation.

According to Banglapedia, Jum is cultivated on about 20,000 hectares of land every year. According to 2017 data, more than 35,000 Jumiya families in the three hill districts were involved in Jum cultivation. According to the Additional Director's Office, Department of Agricultural Extension, Rangamati, the total number of Jumia farmers in the three hill districts was 42,937 in 2020. Of these, Bandarban has 15,048, Khagrachhari 4,390 and Rangamati 23,500. The Jumia family here refers to families dependent on Jum cultivation. Those who live in remote areas such as the Morang, Kheyang and Lusai communities and many more are mostly dependent on Jum cultivation.

In the real sense, Jum cultivation means cutting down the forest of the slope of the hills, drying it, burning it, clearing it and planting different types of crops, including paddy. After cultivating one hill, it is left uncultivated for 1-2 years to increase its fertility. A variety of crops are cultivated in Jum, for example, local and upland varieties of paddy, sweet gourd, marfa (cucumber type), chinal, arahar, bean, cucumber, bitter gourd, potato, sesame, maize, chilli, milet, bilati coriander, yard long bean, ash gourd, snake gourd, spinach, aroid, brinjal, sponge gourd, ginger, turmeric, cotton, yam and marigold etc. However, the number of these crops depends on the Jum to Jum.

According to the results of my own PhD research on Jum cultivation and livelihood of ethnic minorities in the three hill districts in 2013, almost every type of Jum has been shown to cultivate 18 different crops in the hills. In the course of time, its number may have decreased. Jum harvest season is from July to December. However, individual crops are collected from time to time. The forest is cut down and dried from February to March. Then burn and clean. Seeds of almost all crops are sown in April-May after the onset of the first rains.

The method of zoom farming is also different. For example, in the month of January-February, a piece of hill is selected for cultivation at a convenient time. The hill slopes, including trees, bushes, shrubs and weeds, are preferred when selecting hills. Then all the trees, bushes, shrubs and bushes of that forest were cut down. After cutting, they are dried in the sun till the month of March. It is usually set on fire at the beginning of April. The times may vary due to climate change. The dried plants are burnt to ashes. Their idea is that the land is fertile for ash and burnt soil. After that, when it rains a couple of times, the land gets wet and soft. Then the work of sowing the seeds begins.

Small seeds such as chilli or eggplant seeds are sown by broadcasting. The seeds of other crops, including paddy, are mixed together and a certain amount of seeds is given in a hole. After the Chaitra Sankranti and Bengali New Year celebrations, the festival of sowing crops usually begins on the prepared land. A wide blade knife called 'da' is used for sowing seeds. The soil is spread with the head of Da in the left hand and the amount of seeds mixed together is poured with the right hand. This sowing method is primitive. Because many seeds are sown simultaneously in the same hole, there is a natural food competition between them. If the fertility of the land is low, the yield is also low. Different crops mature in the intervening period from July and they are collected in phases.

To increase the productivity of Jum cultivation, it is necessary to select fertile hills, although at present it is quite inadequate. Research can be done to increase the yield of locally grown rice and other improved crops. According to the 'Mountain Agriculture' by FAO, locally the yield of Jum paddy was 2.5-3.0 tons per hectare in 2019, which is less than the yield of high yielding paddy of the same season. It is also important to innovate and expand technology packages on fertilizer management for Jum cultivation systems. Climate change is causing new diseases and insect infestations in Jum crops. This requires integrated pest management and technology.

At the same time, coffee and cashew nuts can be cultivated as profitable crops along with other crops in Jum cultivation. The government has extended its hand to the cultivation of these two crops. Just as the Jumiyas have a role to play in increasing the productivity of the Jum crop, so too do the service providers. It is hoped that the joint efforts will go a long way in ensuring food and nutrition security for the hill tribes in remote areas.