US President Joe Biden on Tuesday announced tough new sanctions against Russia for "beginning" an invasion of Ukraine but said there was still time to avoid war, even as Vladimir Putin signaled plans to send troops beyond Russia's borders.

Japan and Australia followed suit early Wednesday with their own stringent penalties for Moscow and individuals connected with the aggression against Ukraine, with Australian Prime Minister Scott Morrison targeting members of Russia's security council for "behaving like thugs and bullies."

Biden announced what he called the "first tranche" of sanctions, including steps to starve Russia of financing and target financial institutions and the country's "elites."

But he left the door open to a final effort at diplomacy to avert a full-scale Russian invasion. 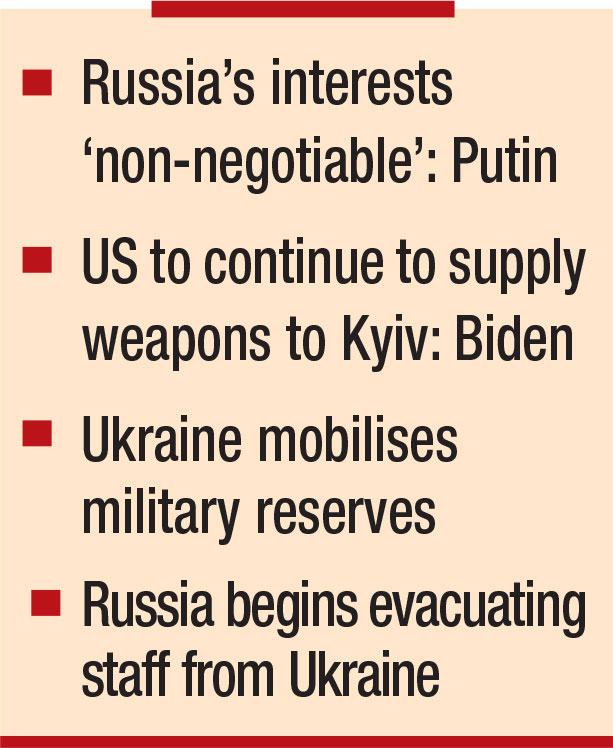 "There's no question that Russia is the aggressor, so we're clear eyed about the challenges we're facing," the president said. Canadian Prime Minister Justin Trudeau on Tuesday announced economic sanctions on Russia, saying Moscow's actions against Ukraine were "a further invasion of a sovereign state, and it is completely unacceptable".

"We will ban Canadians from engaging in purchases of Russian sovereign debt. And we will apply additional sanctions on to state-backed Russian banks and prevent any financial dealings with them," Trudeau said, announcing a series of measures.

EU members on Tuesday agreed a package of new sanctions against Russia that aims to inflict severe damage on the country after its recognition of breakaway regions in Ukraine, the EU foreign policy chief said.

The 27 members of the EU unanimously agreed the measures at an informal meeting in Paris on the sidelines of an international forum, EU foreign policy chief Josep Borrell said.

The sanctions will also target Russian parliament members who backed recognising the breakaway regions as independent, a decision announced by President Vladimir Putin on Monday.

Meanwhile, Putin said Wednesday the country's interests were non-negotiable, as Moscow massed more than 150,000 troops on the borders with Ukraine and the West punished Russia with new sanctions.

In a video address to mark the Defender of the Fatherland Day, a public holiday in the country, Putin congratulated the Russian military and praised the battle-readiness of the army after he signalled plans to send troops to Ukraine.

"Our country is always open for direct and honest dialogue, for the search for diplomatic solutions to the most complex problems," Putin said.

But he added: "The interests of Russia, the security of our citizens, are non-negotiable for us."

On the other hand, Biden said Tuesday the United States would continue to supply "defensive" weapons to Ukraine against a Russian invasion and deploy US troops to reinforce NATO allies in Eastern Europe.

"I have authorized additional movements of US forces and equipment, already stationed in Europe, to strengthen our Baltic allies, Estonia, Latvia and Lithuania," Biden said in a televised speech at the White House.

"Let me be clear, these are totally defensive moves on our part."

However, Ukraine mobilised its military reserve Wednesday and urged its citizens to leave Russian territory as Moscow sharpened its demands, increasing fears of all-out war.

In response, Kyiv's President Volodymyr Zelensky has put Ukraine's more than 200,000 reservists on notice that they will receive summons to return to their units.

Asked if the evacuation had begun, the embassy's spokesman Denis Golenko told AFP by phone: "Yes." Moscow's foreign ministry announced Tuesday it would evacuate diplomats from the country soon.