Bangladesh perhaps is a unique country where some political parties are relentlessly busy with multifarious political issues, each trying to vilify others. But when such vilifications go against the country, then it becomes a problem and often some vilifications are tantamount to treason. In the last few days inside the Bangladesh parliament and outside, Bangladesh’s two major political parties have hurled against each other the accusation that each appointed lobbyist in USA to advocate their cause. The matter went to the extent that the Minister of Foreign Affairs and his deputy produced in the parliament relevant documents and revealed that these documents are documentary evidence that BNP, a major political party of the country, has appointed eight political parties in USA and spent millions of Taka to malign the present government and the country. The documents are available in the US government website.  Earlier BNP’s staunch ally Jamaat-e-Islami also spent a substantial amount of money to appoint US and British lobbyist firms and individuals to stop the trial of those accused for committing crimes against humanity in 1971. One may recall that no less than a person like the former US Secretaries of State Hillary Clinton and John Kerry personally called Bangladesh’s Prime Minister Sheikh Hasina and requested her to stop the trial and, especially, not to hang the Jamaat leader Quader Mullah who was found guilty of committing crimes against humanity in 1971. These trials were held in an open court and even US Human Rights observers and activists and a group from Turkey visited these courts to see for themselves the proceedings of the court and expressed their satisfaction. Sheikh Hasina simply replied Bangladesh as a sovereign country must and will adhere to its legal obligations and practices and will execute the decisions of the court once the verdicts are announced and the due process of law is complete. The outside interference in such cases is unwarranted. Hillary Clinton also unsuccessfully tried to intervene in the Grameen Bank issue. On Thursday the Prime Minister in her concluding speech in the parliament’s just concluded session mentioned how a section of civil society members and some noted persons lobbied with the World Bank to stop the financing of the Padma Bridge. Though she refrained from naming the persons involved in such misdeeds, the nation is aware of their identity.

Lobbying for a country or a person or persons is an acknowledged legal profession in USA, EU countries and Australia.  Anyone can hire a 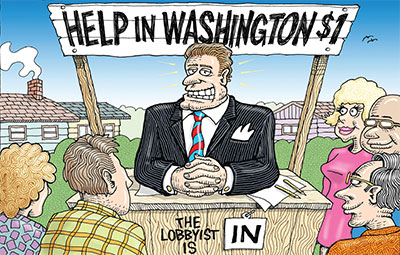 lobbyist or a firm to lobby any cause of their choice in these countries for a fee. Lobbyist firms usually will work for clients who pay the highest fee and ethical issues are seldom of any importance in such cases. During US elections candidates hire lobbyist firms to raise funds for them to be used in political campaigns. Such acts by candidates are normal. Persons like Hillary Clinton, the former First Lady and US Secretary of State, also facilitate or help others hire lobbyists. In 2015 when a US company Keystone XI was planning to lay a gas pipeline through Midwest America to join the Canadian System with Texas damaging the environment of the area the locals protested and declared that they will not allow any pipeline through their land. The company lying the pipeline approached Hillary Clinton who facilitated the hiring of Bryan Cave LLC to lobby on behalf of the company.

Such appointment of lobbyist firms or persons in the interest of the country has always been appreciated. But what is not and will never be supported when any person or political or non-political organizations appoint any person or lobbyist to work against their own country’s interest. Currently one of the major political parties BNP, along with its major ally Jamaat, has been accused with documentary evidence that they appointed eight lobbyist firms to lobby against Bangladesh and its current government. Such an act can very well be termed as treason and seditious.

Initially when the issue was made public by the State Minister of Foreign Affairs in the parliament there was a strong denial by some of the senior leaders of BNP. But within a couple of days the party Secretary General Mirza Fakhrul Islam confessed that they did appoint lobbyist firms and it was done for protecting the ‘democracy’ in the country (read making their  ascending to power easy).

BNP is a party which was formed in a very unusual manner. It is a party which was formed while its founder General Zia was in power. Since then it never could think itself out of power but unfortunately it is now out of power since 2007 and their coming back to power under the present circumstances as of now seems farfetched. It has now become a party without any proper leadership. Their Chairperson Begum Zia is currently serving a jail term of ten years for embezzlement of public money and is physically unwell. The Chairperson in Charge,  Begum Zia’s son Tarique Rahman who has already been sentenced to life term imprisonment in a number of criminal cases including attempt to kill the current Prime Minister Sheikh Hasina on 21 August 2004 when she was the Leader of the Opposition in the Parliament.  Tarique Rahman is currently absconding in London and trying to run the party virtually from there. Political parties in the current world cannot be run or led on a remote control mode which Tarique Rahman perceives doing.

It is not the first time that BNP has been accused of working in the international arena against the interest of the country for their petty interest. On 30 January 2013 Begum Zia wrote an article in the Washington Times titled, ‘The thankless role in saving democracy in Bangladesh” requesting US to stop the GSP facilities to Bangladesh and stop funding all development projects. She also wrote that US and western nations to come forward ‘save democracy’ in Bangladesh and that they should consider targeting travel and other sanctions. As soon as the article came to the notice of the common people of the country along with other political parties they were not only angry but also condemned Begum Zia for such a derogatory article in a foreign media defaming the country and asking the US and other western countries to stop all sorts of facilities including the financial assistance to Bangladesh. As expected the then Leader of the Opposition in the Parliament Begum Zia denied writing the article. Bad luck for her the editor of a popular on-line news portal from Bangladesh contacted the Executive Editor of Washington Times David S Jackson who ‘confirmed its authenticity.’ He also wrote “The article that appeared in Washington Times was submitted to us by Mark Pursey, a London based intermediary (lobbyist) acting on behalf of Begum Zia. We have been in touch with Mr Pursey both before and after the publication of the article.” Pursey was one of the partners of the British PR company BTP Advisers, a communication consultancy with network of partners across Europe, Africa and emerging markets.

On following 28 June when US suspended Bangladesh preferential trade status, Begum Zia told the parliament that Washington Times article was not written by her. She was very vocal and said it was a conspiracy to malign her image to the people of the country. Some parliament members even said that Begum Zia’s article amounted to sedition and demanded legal measures be taken against her. Surprisingly a day after its publication, BNP leader (now deceased) Moudud Ahmed revealed that Khaleda Zia had written the article to draw the attention of the US and other well-wishers of Bangladesh….It was to “guard democracy  in the country.”

By this time BNP should have shaped itself into a proper political party serving the interest of the people and country and upheld the spirit of Liberation War of the country. Unfortunately, it could neither fulfil the aspirations of the people, serve the country nor part with its political partner Jamaat-e-Islami.

As I conclude, the National Parliament has adopted the long expected Election Commission Law for which the nation had to wait long fifty years. Congratulations to the present government and all the parliament members for passing the law. Those who oppose the law can always amend or dump the law when they are able to form a government. On the same day the local media broke the news that a section of BNP sympathisers in Europe with their Pakistani allies got together in Brussels and held a press briefing demanding that the convicted Begum Zia be released from custody and allowed to go abroad for treatment. BNP’s Pakistan connection has always been omnipresent.  From the activities of BNP it seems it is always in a war against itself, the people of the country and the country itself.

More on the issue of lobbying against the country next week.