Although the Rajdhani Unnayan Kartripakkha (RAJUK) claims that the plots are ready for construction of residential houses and establishments at Purbachal New Town Project, but absence of utility services is the main constraint on building human habitation.

Authorities have claimed that RAJUK have almost completed the land development work but the reality is completely different as many areas are still under development process.

Plot owners are apparently getting frustrated as they do not see any light to complete the infrastructure, utility services and necessary government establishments like setting up of police station, fire brigade hospitals in the new town area in near future.

RAJUK continued to miss extended deadlines to complete the project.

RAJUK could not ensure basic amenities like electricity, gas, water, sewerage, drainage, waste management and approach roads, bridges and footpaths in the area in 27 years for the township. 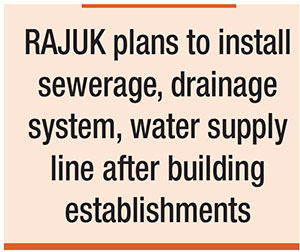 Even, of 25,016 residential plots, a large number of the plots are yet to be allotted to their owners, which is another reason for getting a deserted look to the much-hyped planned township.

Sources said that RAJUK took the ‘Purbachal New Town’ project in 1995 on 6,227 acres of land in Dhaka, Gazipur and Narayanganj districts with a view to shifting pressure of Dhaka to the planned township.

The preliminary budget of the project was Tk 33.17 billion in 1995 which rose to Tk 77.82 billion after six revisions to date.

During the recent visit to the Purbachal Project area, it is seen that the development of the link road of the township with Dhaka, eight lanes Kuril-Kanchan Bridge expressway, is yet to be completed.

Out of 61bridges and culverts, construction work of 39 structures is completed and most of the plots on both sides of the expressway have remained empty and much of the land is yet to be developed for constructing any infrastructure.

Talking to the correspondent, plot owners said that they were not constructing buildings for lack of water, electricity, gas, roads, and other facilities.

They also said that many have sold out their plots for not getting the utility services since 1995.

Anwar Hossain, a plot owner at 3 no. sector, said he did construct building for lack of water, electrify, gas and other services.

“I have been waiting for 26 years for water, electricity and roads. I want to construct an apartment for my family and for rent. If I construct a building in this condition, none will agree to live here.”

He said that at least nine plot owners like him got the design approval for the building but they are yet to go for construction for the lack of utility services.

Abdus Samad, a caretaker of a plot near Janata High School under Brahmonkhali of Rupganj, said the owner is not constructing the building for the lack of services.

“I have set up a small house on the plot of my landowner. There is no electricity or water supply line there. We have lit candle at night and for water, we depended on hand tube well of Janata School.”

RAJUK signed a contract with a Chinese firm under a PPP project to construct a total of 320 kms distribution pipeline network to meet 340 million litres per day need of water supply in Purbachal in September last year.

They have a contract with DESCO for electrification in the project area.

“We have signed a deal with a Chinese firm and they will complete the work of water distribution pipeline by 2023. We can supply underground water in four sectors by June this year. They are now setting up their administrative building to start the project work,” he said, adding that RAUK is allowing extraction of groundwater.

The RAJUK Chairman said, “We developed some drainage lines and stopped the work. We will resume it after building the infrastructure because we have to understand the size of population for planned development. The same is applicable for sewerage line, solid waste management facility and approach roads.”

Urging plot owners to set up their infrastructure, he also said that if the company draws the distribution line, RAJUK will have to pay the water bills without use.

Director of the Project and Chief Engineer of RAJUK (Implementation) Ujjwal Mallick said that around 75 percent work of the project was done and it will be completed by June this year.

Managing Director of Dhaka Electrical Supply Company Ltd MdKausar Ameer Ali said, “We have set up supply line of electricity in more than 50 percent area of Purbachal. Actually, we set up the backbone of the line of the whole area and now working in pocket areas.”

He also said, “RAJUK has not completed some work, including the construction of bridges and culverts, that’s why we could not expand our line in some areas. DESCO is ready to deliver services in both of the areas where the electrical poles were not set up or wire was not drawn.”

He said the government has a plan to draw the electric cable underground and for this reason, they are going slow to expand the service line.