Prime Minister Sheikh Hasina on Wednesday told Parliament that Bangladesh is advancing towards progress dispelling all the misconceptions regarding the future of independent Bangladesh, reports BSS.

“Bangladesh is marching towards development and progress defying all the misconceptions of the pessimists relating to the future of independent Bangladesh,” she said while replying to a tabled question from ruling Awami League lawmaker Momtaz Begum from Manikganj-2 constituency.

The premier said it is a matter of pride that in the year of the golden jubilee of Bangladesh’s independence and Bangabandhu’s birth centenary celebration, the UNCDP recommended graduating Bangladesh from a least developed country to a developing country by 2026.

To dispel the misconception about Bangladesh’s advancement in the future, Sheikh Hasina said, her government has taken various time-worthy steps to implement plans to face the global trade challenges following graduation from the LDC. 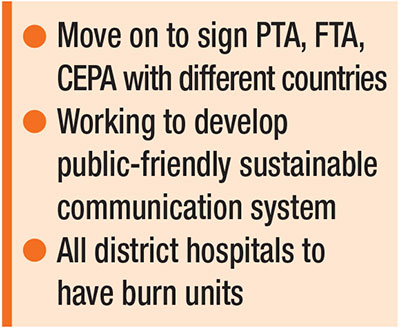 Spelling out measures in detail, she said, “The government has already initiated the formulation of a strategy and action plan over Preferential Market Access and Trade Agreement to expand the export market by facing global trade challenges following the graduation.”

Initially, the government has taken a step to sign trade agreements with 10 countries and three alliances on a priority basis, she said adding that Bangladesh signed PTA with Bhutan on December 6, 2020.

Besides, a process is underway to conduct negotiations with Turkey, South Africa, Morocco, Mauritius, Senegal, Nigeria, Sierra Leone, Kenya, and GCC countries over PTA, FTA or CEPA, she said.

Referring to the feasibility studies over signing the trade deal with different countries, the Prime Minister hoped that the study, which is now being conducted jointly by Bangladesh and India to sign, will be completed soon.

She added an initiative has also been taken to sign a FTA with China to expand bilateral trade and a joint feasibility study in line with a MoU signed between the two countries.

Sheikh Hasina continued the process of signing FTA with Sri Lanka continues, which might be inked in March 2022, and the desired progress was also obtained to sign PTA or FTA with Nepal and Indonesia, she added.

She said the proposal for inking PTA/FTA/CEPA with the Maldives has been sent, while an initiative has been taken to form a working group between Bangladesh and Singapore to sign a bilateral FTA.

Besides, initiatives have been taken to have FTAs with Morocco, Nigeria, Kenya, and Sierra Leone, while the feasibility studies were completed to sign FTAs with the USA and Japan, she added.

The premier said Bangladesh has also been playing an important role in making APTA, TPS-OIC, and D-8 Preferential Agreement effective.

Due to the successful diplomatic efforts of Bangladesh, she said, the LDCs including Bangladesh have been able to obtain a number of facilities, including the time extension of pharmaceutical patent exemption till 2033 under Trade-Related Intellectual Property Rights (TRIPS). And general exemption was made relaxed for LDCs further for 13 years from 2021 and so, the special facility will remain till July 1, 2034, she added.

On the other hand, the government is determined to build a safe and integrated communication network in the country, said the Prime Minister, replying to another question from AL MP Didarul Alam (Chattogram-4).

She said the government has been implementing a good number of projects to develop a public-friendly sustainable communication system in planned ways in the last decade in order to ensure the safe journey of common passengers throughout the country including Dhaka.

“The government is committed to easing traffic congestion, ensuring comfortable public transport, increasing discipline and security on roads, safe and risk-free roads, and to develop an integrated multimedia communication network by keeping the consistency of the existing system and the changing situation with the future development,” she said.

The Prime Minister mentioned her government’s efforts and successes for the improvement of the road communication system.

In reply to another ruling party MP Nur Uddin Chowdhury Nayan (Laxmipur-2), the Premier said the government has a plan to set up burn units in all district hospitals for expanding treatment services to patients with burn injuries.

She said the world’s largest burn institute was set up in Dhaka with an initiative of the present government and the 500-bed Sheikh Hasina National Burn and Plastic Surgery Institute, having modern facilities, continues its operation.

There is a 300-bed burn unit with Dhaka Medical College Hospital to deliver treatment services to the burn-injured patients, she said, adding that there are burn units in 13 institutes and medical college hospitals in the country.

Sheikh Hasina said ECNEC on December 1, 2021, approved a project titled “Establishment of Burn and Plastic Surgery Unit at 5 Medical College Hospitals’’ to set up modern burn units in Sylhet, Barishal, Rangpur, Rajshahi, and Faridpur medical college hospitals with assistance of Saudi Fund for Development (SFD). There will be full-fledged 100-bed burn units in the five hospitals.

Besides, the step has been taken to establish modern burn units in Khulna and Mymensingh, while the process of setting up a modern burn unit in Chattogram Medical College Hospital continues, she said.

Asia must combine forces for a better future: PM