Initiative has been taken to bring all highways of the country under the vigil of closed-circuit television (CCTV) cameras to ensure safety of passengers and safe movement of vehicles as well as to prevent crimes and accidents.

As a CCTV camera is a very effective tool to control crimes and identify criminals, different divisional cities, important districts and even many tourist areas have already been brought under surveillance cameras.

Work has already begun on the installation of these cameras at 490 locations of the 250-km Dhaka-Chattogram highway. Surveillance cameras will be installed on the Dhaka-Mymensingh and Dhaka-Khulna highways within this year.

Highway Police officials said approval has been received from the Roads and Highways Department to install the cameras. Regular discussions are going on with the representatives of Power Division for power connection.     Besides, the draft agreement with Bangladesh Telecommunications Company Limited (BTCL) for data connection has also been finalised. Work on setting up Highway Command, Control Centre Monitoring and Data Centre at Meghna Ghat in Narayanganj is nearing completion.

According to police sources, senior officials have recently held a meeting at the Police Headquarters to implement various police projects. Different projects of Highway Police were discussed at the meeting.

During the discussions, the project director said the final survey for the highway surveillance system has been completed. CCTV cameras have also been brought from abroad.

According to Highway Police sources, the Dhaka-Chattogram highway has been divided into four zones for round-the-clock surveillance. The zones are Dhaka, Cumilla, Feni and Chattogram.

Mallick Faqrul Islam said a total of 1,427 CCTV cameras will be installed on Dhaka-Chattogram highway under the project run by Highway Police. There will be 16 long vision 4k PTZ dome traffic cameras, 471 PTZ dome cameras, 924 bullet cameras and 16 checkpoint cameras. There are 490 camera poles with alternative power supply system in case of power outage.

“If the project is implemented, no vehicle will be able to run far after any accident. Vehicle number plates can be detected automatically. The trajectory of the vehicle can be identified. CCTV cameras will have high-speed detection. High-speed vehicles can be identified through this,” the additional IGP said.

“Extortion and robbery on highways will come down to a great extent. The behaviour of the suspects can be analysed along with real-time monitoring of the highways. These CCTV cameras will play an effective role in reducing drug menace, theft, robbery and other criminal activities,” he added.

An official of the Highway Police said with the introduction of Intelligent Traffic Management System, it will be possible to automatically detect number plates, speed of vehicles, detection of high speed and vehicles violating traffic laws.

Once the cameras are installed, clear images can be captured even in dark and foggy weather and the number plates of vehicles on the roads can be photographed and stored, he said.

The police official further said if there is crowd due to any problem or crime, advance warning message will be sent to the monitoring cell. This system will also have an effective role in reducing traffic congestion. CCTV camera footage can be stored for about a month. This will help in crime investigation. Instruments will also be installed on the highways to measure the speed of vehicles.

Sources said the port city of Chattogram is very important because of the trade and commerce of the country. Many goods are brought to Dhaka every day by covered vans or trucks from the Chattogram port. In the same way, different goods are going to Chattogram from Dhaka. But there are allegations of extortion and looting of goods from covered vans on the roads.

Under such circumstances, a meeting of the Road Transport Taskforce was held at the Ministry of Home Affairs on June 20 last year.

After the meeting, Home Minister Asaduzzaman Khan said, “The Dhaka-Chattogram highway will be completely under camera control. “Everything -- how an accident happens and who drives on the road -- will come under our control.”

About extortion on highways, he said, “I won’t talk about extortion. I’ll say there is toll, it has to be paid. It’ll be decided where to take it, how and how much money. No one can take this toll except that place. The transport toll that the owners or workers take to run the association is also fixed. No one will be able to collect toll except at bus terminal or from where buses leave.” 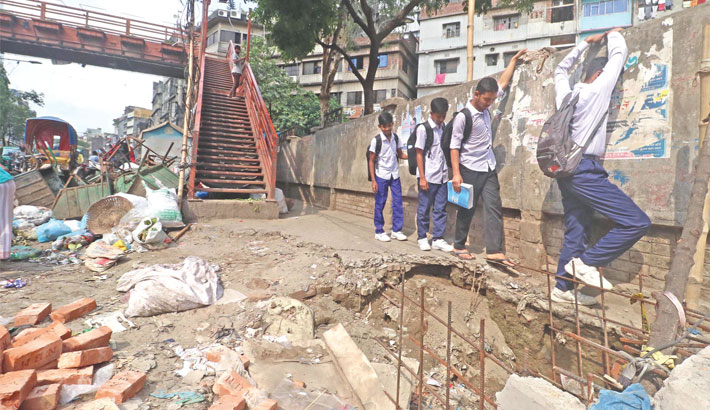