The University of Dhaka is celebrating her centennial year. It was established in the first quarter of the last century. It is the 2nd university that was established in undivided Bengal. The first one is the University of Calcutta which was established in 1857. It took more than six decades to establish another institution of higher learning in the then Bengal. Here, it needs to be mentioned that Bengal was divided in 1905 and new provinces called East Bengal and Assam were created. However, it did not last long, being annulled in 1911 by the colonial government under pressure from different quarters. But the people of East Bengal and Assam were dissatisfied with the decision of the British government. To appease them or as a conciliatory measure to dispel their dissatisfaction, a new university was established in Dhaka in 1921.

The opening of the new university opened the door for higher learning for the people of this region, who were otherwise lagging behind compared to the people of other parts of the then greater Bengal. The Muslims were particularly benefited by the establishment of the University of Dhaka, as the majority of the population of the erstwhile East Bengal was predominantly Muslims.

The new university grew with time. More academic departments were opened and the number of students also increased considerably. However, in 1947, the Indian subcontinent was divided on the basis of the two nation theory and the countries of Pakistan and India were created. Partition gave a big jolt to the 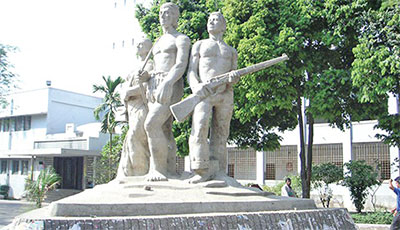 University of Dhaka as many of its faculty members and students who were Hindus, left the university as they immigrated to India. However, the university was able to overcome the crisis caused by the partition and started functioning under the newly created government. It is interesting that with the creation of Pakistan, East Bengal being a province of it, whatever political development took place, particularly concerning the people of East Bengal, the University of Dhaka played a crucial role in all of them. It started with the language movement of 1952 and ended with the liberation war that ultimately created the sovereign state of the People’s Republic of Bangladesh.

In the liberated country, the university has also been intimately involved with every political and social movement that occurred for the establishment of democracy that was, time and again, flawed or suspended by the military regimes that usurped state power by deposing elected governments through unconstitutional means. In the socio-cultural arenas, the University of Dhaka has also played a decisive role in shaping the cultural norms, values and psyche of the people of the country. In a nutshell, it can be said that the history of Bangladesh is inseparable from the history of the University of Dhaka. The politicians and other conscious and patriotic elements of society, who conceived ideas and demands for the betterment of the country and its people were all connected to the University of Dhaka as either faculty members or students that translated into popular movements, including the war of liberation, and the subsequent establishment of a free and independent country.

The year 2021, was the centenary year after the establishment of the University of Dhaka. It has been a great occasion for the university as well as for the country. Elaborate programs were drawn up to celebrate the centenary year, but it was marred by the onslaught of the killer Covid-19 virus. Celebrations could not be held in a full-fledged manner for the fear of widespread infection of the deadly virus. However, the university authorities, the alumni and other relevant quarters tried their best to celebrate the year in a befitting manner.

Now that the University of Dhaka has entered into its 2nd century, it needs to carry forward the mission for which it was established, lived and prospered, under difficult circumstances at different points of time. Here, it needs to be remembered that the time, situation and environment have changed since its establishment in 1921. The university must live up to its expectations by proactively addressing and adjusting with the changed national and global scenario. The university, its faculty members and the students must take up the challenges posed by the continuously changing emerging knowledge based world. To always be with time and even ahead of the demands of time, some serious concerted efforts should be taken up by the university authorities and its stakeholders to catapult the university as one of the leading centres of learning and knowledge in the world.

Here, it should be mentioned that Bangladesh has set a vision to become a rich nation by 2041. To realise that cherished dream, Dhaka University will have to play a great role as tomorrow’s world will be a knowledge-based one led by the 4th industrial revolution. To do justice to the perceived role, the university must chart its future path through a planned manner. For that purpose, it needs to develop time-bound strategic plans every five years, stating vision, mission, goals, objectives and strategies. These time-bound plans will provide strategic directions to the university to adjust with the demands of time and cater to the needs of the nation to at least achieve the vision set for the year 2041.

Quality education and research are the other areas that the university should focus on now. These should be primary objectives in the new century. For this purpose, initiatives should be taken immediately; otherwise, the graduates of Dhaka University will not be able to compete with the graduates of other universities of the world. Here, it needs to be remembered that we are a part of the global world with fierce competition among graduates of all the countries of the world. To survive in this kind of environment, our graduates should also be equipped with knowledge and skills which only educational institutions can provide. The other recent development is the already emerged fourth industrial revolution. This new reality also calls for new knowledge and skills to survive in the competitive world. For this purpose, the University of Dhaka should also focus on and provide cutting-edge education to its students. This will help the individual students and the country as well. This requires constant improvements in the quality of education and introduction of new and emerging sought after subjects for the students to choose and study.

To push the pursuit of learning and knowledge generation further, the university should establish more networks with other educational and research organisations. This will help in taking up collaborative research work with those institutions and, at the same time, the students will reap the benefits of such collaboration by availing opportunities to participate in those research works. More teacher-student exchange programs should be taken up with these institutions as they will open up opportunities to study there and get necessary exposure to international environments.

With time, as mentioned earlier, the university has grown in size in terms of the faculties and student bodies. To cater to enrol more aspiring students and more disciplines to be opened up, the university needs to take proactive initiatives to establish new campuses around the city. In the first phase, the 2nd campus that is being contemplated to be established in Purbachal New Town should be established as quickly as possible. We learnt that Rajuk has already allocated land for this purpose. Later, in a planned manner, other additional campuses could be established in different parts of the city.

Here, it may be mentioned that the university has a large number of very reputed, qualified and competent faculty members whose expertise and services are currently being utilised by private universities. Their similar services could also be harnessed by Dhaka University in its new campuses, if they are established. In addition, more students can study at the university on its various campuses.

Universities are part of greater societies both influencing each other and making gains through interaction between them. The University of Dhaka has a rich tradition of such interactions. However, in the coming years, this needs to be more focused and intensified for the benefit, particularly, of the university. Now, Bangladesh is a fast growing economy. Like every other developed country, it also needs to enter into more collaboration with industries and business institutions. Universities can solve many technical as well as management problems of the business and industrial enterprises. Such collaboration will enrich both in terms of problem solving for the businesses and resource generation for the university. It is a fact that due to resource constraints, universities in Bangladesh, in overwhelming cases, cannot allocate adequate financial resources for the purpose of research and knowledge generation. To overcome the problem of resource constraint, the University of Dhaka can create an endowment fund amounting to Taka 1,000 crore, dedicated specifically for the purpose of research and improvement of teaching and learning facilities. It is perceived that with increased prosperity of the country, the alumni of the University of Dhaka, the business and industrial houses, the government and the general public will come forward with financial donations to create the aforementioned endowment fund. Now, the time has come to move forward towards those directions for making the University of Dhaka a world class university, producing competent graduates who can take up any challenges and compete with other university graduates from around the globe. In addition, through taking up cutting edge research initiatives, new knowledge should be generated for technological and social advancement to enrich the lives of the people around the world.