The Pursuit of Common Prosperity

Although the Covid-19 pandemic seems rather unwilling to bow out, leaving the world in a prolonged state of abnormality, it does not mean that many other challenges facing the world today should be put on the back burner. Among such challenges, burgeoning inequalities deserve our attention.

According to the latest World Inequality Report produced by World Inequality Lab, the richest 10% of the global population currently own 52% of the world’s income, while the poorest half earn only 8%; the richest 10% own a staggering 76% of the world’s total wealth, while the poorest half own only 2%. Across major continents, the gap between rich and poor has begun to tear society apart and fuel political polarisation and populism.

Faced with such bleak global realities, China starts to look at itself. With its Gini Coefficient remaining at a relatively high level, it is crucial for China to take lessons from countries where brutal inequalities have led to disastrous consequences. Its determination can be seen from the latest blueprint for “common prosperity”, a concept that is not unfamiliar to many, which connects the dots in the past, present and the future.

A Quest of Thousands of Years

About 2200 years ago in China, The Book of Rites depicted the prevailing of “Dadao”, or “the Great Way”, envisioned by ancient sages. It is a world where everyone is equal, where trustworthiness and harmony abound so much that people do not need to lock their doors at night. In this world, people love not only their own parents and children, but also those of others. The elderly are well supported till their death, adults have adequate jobs, and the young grow up carefree; widows and widowers, orphans and childless, sick and disabled are well taken care of. In this world, people hate to see wealth lying about on the ground, but do not necessarily take it for their own use; they hate to withhold their own effort, but do not necessarily devote it to their own ends. 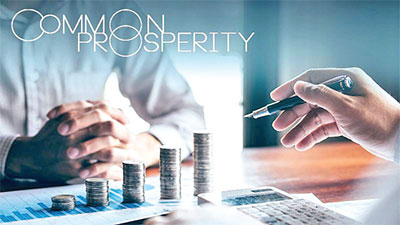 Over the course of millennia, never has such a world really existed, but neither have people stopped dreaming of it. In China’s feudal era, the most powerful slogan for grassroot insurgencies was to “eliminate differences between the noble and the ordinary, and share wealth between the rich and the poor”. Not coincidentally, a close examination of Chartism in the UK, the Canut Revolts in France and the Silesian Weavers’ Uprising in Germany reveals one thing in common— the labourers demanded to acquire a larger share of the wealth they created for capitalists and the noblesse, and a higher social and economic status commensurate with their contributions.

Although people from different parts of the world have experimented with different approaches towards common prosperity, it was only after Karl Marx and Friedrich Engels founded scientific socialism that the concept stopped being Utopian. Marxists believe that when the means of production are owned privately by a small group of people, as in feudal and capitalist societies, “prosperity” can only mean exploitation of the vast majority by the small minority of “elites”, and therefore can never be “common”. When the means of production are owned by the public as in advanced forms of socialist societies, Marxists argue, all the members of such societies will have an equal chance to enjoy social products and become prosperous not only in measurements of wealth, but also in mental well being and human development.

Guided by the Marxist ideal of common prosperity, a round of unprecedented experiments were carried out in Russia after the October Revolution, then in the USSR and a number of countries, with both positive and negative experience gained. However, the most profound quest for common prosperity takes place in New China with some progress already made. As China emerges as the second largest economy in the world, absolute poverty eliminated and the goal of building a moderately prosperous society in all respects (Xiaokang Society) achieved, it is now ready to embark upon a new journey toward its thousand-year-old dream of common prosperity.

In October last year, President Xi Jinping pointed out in an article published in the Qiushi Journal, a flagship publication of the CPC Central Committee, that common prosperity is an essential requirement of socialism and a key feature of Chinese-style modernisation, making it clear that it is not uniform egalitarianism, still less a privilege for a few. Instead, it should be enjoyed by all in both material and spiritual dimensions. In fact, common prosperity has already been set as the top priority of the CPC’s second centenary goal, which is to build China into a great modern socialist country in all respects by the middle of this century.

China’s endeavours towards common prosperity must be understood within the framework of Socialism with Chinese Characteristics. Just as the late Chinese leader Deng Xiaoping once put it, the essence of socialism is to unleash and develop productive forces, to eliminate exploitation and polarisation, and to realise common prosperity in the end. In China’s context, “common prosperity” goes far beyond “getting rich together”. First, it cannot be reduced to “prosperity in aggregate sense” or “prosperity on average”. Rather, it means “prosperity for each and everyone”, which rejects the practice of using empty statistics to represent the level of individual wealth. Second, it does not mean “simultaneous prosperity” or “getting rich at the same time”. Instead, given the fact that people differ in terms of regions, occupations or social and educational backgrounds, it allows the same goal to be achieved at different paces. Third, it does not require that everyone enjoy exactly the same amount of wealth. Rather, it creates equal opportunities for everybody to reach their full potential, and permits reasonable differences based on talent, creativity or hard work, so that people have the incentive to work for a better life. Fourth, it focuses on both material and spiritual aspects, and promotes political, economic, social, cultural and ecological prosperity of everyone. Fifth, it puts emphasise on empowerment as well as redistribution and assistance in various forms, so that in the long run, people can acquire the ability to pursue prosperity on their own, instead of waiting to be aided. Sixth, due to its unprecedented nature, realising common prosperity in China will be a gradual process that will take a long time without a prescribed finishing line.

Just when China is ready to pursue common prosperity with renewed efforts, many in the West begin to question: Has China abandoned an open market economy? Is it safe anymore to do business and earn tons of money in China? I think such doubts are symptomatic of a lacking of understanding of China. There are really no worries about “being robbed by the state” in China simply because you are rich. In fact, while endorsing China’s drive for common prosperity, Ray Dalio, founder of the $150 billion investment firm Bridgewater Associates, recently urged countries, including the US, to narrow their wealth gaps by appreciating China’s efforts.

A Blueprint in Sync with Dream and Reality

Just like the way China achieves any grand goals, a clear road map for common prosperity is now in place. The article of President Xi Jinping outlined three phases: The first step is to narrow the gap between people’s income and consumption levels by the end of China’s 14th Five-Year-Plan (2021-2025); the second phase is to make substantial progress in improving the basic public services in different regions to similar levels by 2035; and the last step is to “basically achieve common prosperity” by the middle of this century, when the gap between income and consumption levels will fall into a reasonable range. Any close China observer would find the time frame quite familiar, since it is the same one used to outline China’s overall development initiatives, which means the pursuit of common prosperity has become an integral part of the Chinese Dream, or “Zhongguomeng”.

To set wheels in motion, the Central Economic Work Conference for 2021 held in last December concluded that in order to achieve the common prosperity goal, the first step is to make the “cake of economy” bigger. Then it should be divided well enough. In primary distribution, production efficiency will be further improved and status of labour as a factor of production elevated. In secondary distribution, the government will optimise policies for tax, payment transfer and social security to narrow the income differences among social groups. In tertiary distribution, high income groups will be provided with more incentives to engage in charity and philanthropy, on a voluntary basis, with social morality being the key driver to reduce social inequalities.

To be more specific, the major task of promoting common prosperity is to narrow three gaps, namely regional development gaps, urban and rural gaps, and the income gaps. Besides, the middle-income group should be further expanded to create an “olive-shaped” society; the social class solidification based on income, region and education opportunities should be prevented to unblock upward mobility; basic public services, including housing, social security, pension, healthcare and education, should be equally provided to different social groups; business environment should be further improved so that people have more freedom to pursue a prosperous life.

To set the pace, the central government has designated a pilot zone for promoting common prosperity, which is Zhejiang, a coastal province with a population of 65 million. The province will move a few steps ahead of the national plan to gain necessary experience. If Zhejiang succeeds, chances are more likely that the whole of China would hit the target as planned. While today’s global realities make the dream of an equal and prosperous world more like a mirage, what is happening in China may eventually prove otherwise.