Historic Homecoming Day of Father of the Nation Bangabandhu Sheikh Mujibur Rahman will be observed today.

This day in 1972, Bangabandhu, the supreme commander of the country’s Liberation War, returned to independent Bangladesh via London and New Delhi after 290 days of captivity in a Pakistan jail.

Bangabandhu proclaimed independence of Bangladesh in the wee hours of March 26 and called upon the people from all walks of life to join the war of independence.

Soon after the proclamation of independence, Pakistani military junta arrested Bangabandhu from his Dhanmondi residence in Dhaka and launched a crackdown code-named ‘Operation Searchlight’ on the unarmed Bangalees.

The Pakistan military government sent Bangabandhu to a prison in West Pakistan.

Bangabandhu was subjected to inhuman torture in the Pakistan jail where he had been counting moments for execution of his death sentence awarded through a farcical trial.

Following his release, Bangabandhu flew to London where he met then British Prime Minister Edward Heath and addressed the international media there.

“I was a prisoner in the condemned cell awaiting hanging. From the day I went to jail, I didn’t know whether I would live or not. I was mentally ready to die. But I knew Bangladesh would be liberated,” Bangabandhu told the news conference in an emotion-choked voice about his ordeal in the prison.

About the Pakistani army’s killing of Bangalees, he said, “If Hitler had been alive today, he would have been ashamed.”      Bangabandhu flew to Dhaka on January 10, 1972 after a brief stopover in Delhi where he was accorded a reception by then Indian President VV Giri and Prime Minister Indira Gandhi, council of ministers, chiefs of three services and other dignitaries and common people.

On his return to the country, tens of thousands of people standing by the road from the airport to Racecourse Maidan (now Suhrawardy Udyan) greeted him.

Bangabandhu addressed a huge gathering of people at the historic ground where the Pakistani occupation forces surrendered to the allied forces.

He recalled with respect the contribution of all to the war and urged the people to rebuild the war-ravaged country.

Bangabandhu took oath of office as the country’s prime minister on January 12, 1972.

Marking the day, ruling Awami League, its front organisations and other socio-cultural organisations have taken up elaborate programmes.

AL’s daylong programmes will begin with hoisting of the national and party flags at its offices and Bangabandhu Bhaban at Dhanmondi at 6:30am.

Besides, the party will hold a discussion at 3:30pm tomorrow at its central office on Bangabandhu Avenue in the capital.

Awami League President and Prime Minister Sheikh Hasina is scheduled to address the meeting virtually from her official residence Ganabhaban.

All programmes marking the day will be observed maintaining health guidelines.

Besides, newspapers will publish special supplements while radio stations and television channels will air special programmes highlighting the significance of the day.

In his message, President Hamid called upon the country’s people to make relentless efforts to build a ‘Sonar Bangla’ as dreamt by Father of Nation Bangabandhu Sheikh Mujibur Rahman.

Paying profound homage to Bangabandhu, he said: “Although we achieved ultimate victory on December 16, 1971 through an armed struggle, the true essence of victory came with the return of the Father of the Nation.”

The President said Bangabandhu, a visionary leader, led the nation in every movement, including the All-party State Language Movement Council in 1948, Language Movement in 1952, Jukta-Front election in 1954, movement against martial law proclaimed by General Ayub Khan in 1958, movement against Education Commission in 1962, Six-Point Movement in 1966, Mass Upsurge in 1969 and the general election in 1970 where Awami League won a landslide victory.

On March 7, 1971, Bangabandhu delivered a historic speech at Racecourse Maidan which was the indirect declaration of independence, he said.

“I will say while walking gallows - I am Bangalee, Bangla is my country and Bangla is my language. Joy Bangla,” he quoted Bangabandhu as saying at the mammoth rally.

“Such profound love for the country and people is a unique example in the world,” the President said, adding that Bangabandhu and Bangladesh have now emerged as a unique symbol to the people.

He said as long as Bangladesh and the Bangalee nation exist, Bangabandhu will remain as the “eternal source of our inspiration.”

In her message, Prime Minister Sheikh Hasina expressed firm determination to build a ‘Sonar Bangla’ as dreamt by the Father of the Nation.

“…we’ll uphold the spirit of independence achieved in exchange for the blood of 3 million martyrs and chastity of 2 million mothers and sisters. Inspired by the motto of the Great Liberation War by resisting all imminent conspiracies together, we shall play an effective role in building the 'Golden Bangladesh' of the Father of the Nation's dream,” she said.

The premier said the Father of the Nation struggled for 24 long years to free the Bangalee nation from the shackles of subjugation and Bangabandhu led the nation on all fronts -- from the Language Movement to the Independence War.

She said due to his strong move, the Indian allied forces left Bangladesh by March 15, 1972.

Due to the successful bilateral and multilateral diplomatic efforts of the Father of the Nation, Bangladesh gained recognition from 123 countries of the world and 26 international organisations, Sheikh Hasina added.

From a war-torn country, it emerged as a least developed country in just three and a half years, and Bangladesh stood with a high head in the globe, she continued. 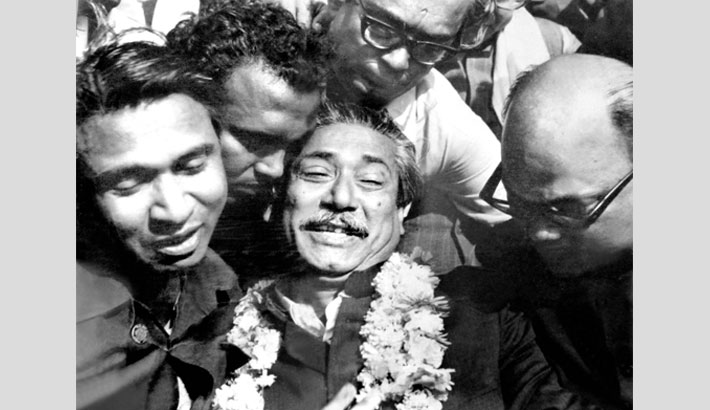 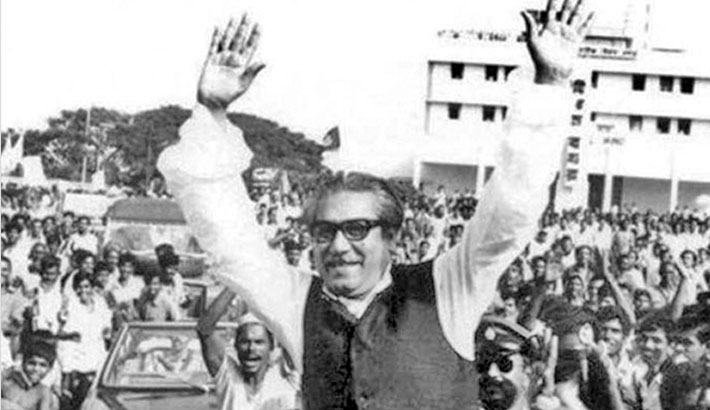 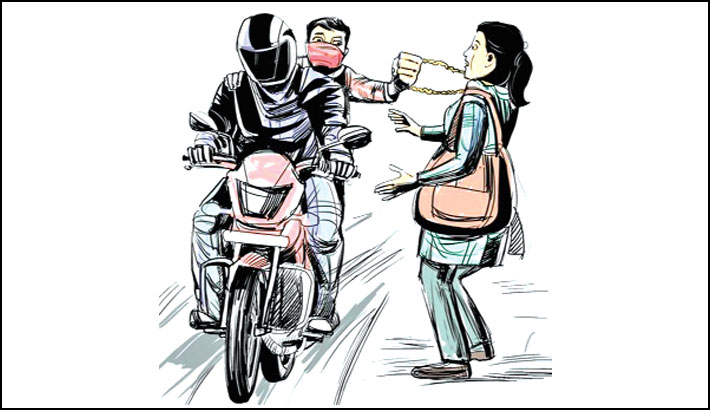