High-flying Bangladesh will be looking to clinch their maiden series victory in New Zealand soil when they take on the hosts in the series-concluding second Test at Hagley Oval in Christchurch on Sunday.

The match is scheduled to start at 04:00am and will be telecast live on T Sports and GTV.

The visitors earlier demonstrated a clinical performance during the opening Test and defeated New Zealand by eight wickets in Mount Maunganui to take an unassailable 1-0 lead in the two-match Test series.

If Bangladesh can successfully win or draw the second Test, they will be the first Asian side to defeat hosts New Zealand in a Test series after 11 long years.

Pakistan are the last Asian side to defeat New Zealand in a Test series at their territory and they achieved the milestone back in 2011 when they completed a 1-0 win in the two-match Test series. 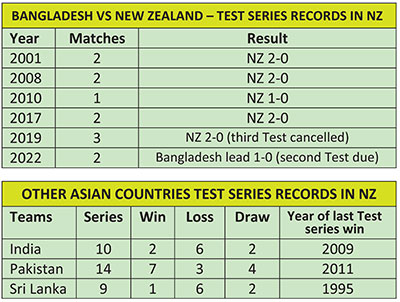 Pakistan are also the most successful Asian Test side in New Zealand who won seven out of 14 Test series in the southwestern Pacific Ocean country while India achieved the landmark twice (last came in 2009) and Sri Lanka tasted such a feat once in 1995.

Meanwhile, South Africa are the last team to defeat hosts New Zealand in a Test series which they achieved back in 2017 and since then New Zealand won every eight Test series they played on their home soil without losing any Test match.

Bangladesh previously played a total of five Test series (nine Test matches in total) in New Zealand before their current tour but finished on the losing side in each Test which included five innings defeats.

However, after ending their 32-match losing streak against New Zealand in their own backyard during the last Test, Bangladesh will be eyeing to add yet another feather to their cap by securing a positive result in the second Test.

On Friday, Bangladesh players completed a gym session in Christchurch as rain prevented their outdoor training.

The Tigers have to make a forced change in the second Test after opener Mahmudul Hasan Joy was ruled out of the series due to a finger injury and back-up opener Mohammad Naim is likely to make his Test debut during the crucial Test.

Apart from that, Bangladesh are unlikely to break their winning combination against the hosts for the last Test.

Meanwhile, New Zealand will be aiming to come hard against Bangladesh in the series-concluding Test which will also be the farewell Test appearance of the great batsman Ross Taylor.

“We’re one-nil down, we know we have to play some aggressive cricket,” said Taylor on Friday, adding that the green Hagley Oval wicket will favour the hosts to a large extent.