Archbishop Desmond Tutu, the Nobel Peace Prize winner for his role in the opposition to apartheid in his country South Africa, has died from cancer at the Oasis Frail Care Centre in Cape Town on 26 December, 2021, at the age of 90. And thus, one of the great lives of the late twentieth and early twenty-first centuries has left us forever. It is a great loss for the peace-loving people of the world. A week-long mourning event will end with the beginning of the New Year in South Africa.

Expressing his condolences to Tutu’s family and friends, South African President Cyril Ramaphosa has said, “A man of extraordinary intellect, integrity and invincibility against the forces of apartheid, he has also tender and vulnerable in his compassion for those who had suffered oppression, injustice and violence under apartheid, and oppressed and downtrodden people around the world.” The Nelson Mandela foundation called Tutu's loss “immeasurable”.  In its statement, the foundation has said, “He was larger than life, and for so many in South Africa and around the world his life has been a blessing. His contributions to struggles against injustice, locally and globally, are matched only by the depth of his thinking about the making of liberate futures for human societies.”

Queen Elizabeth II described Tutu as “a man who tirelessly championed human rights in South Africa and across the world.” Former US President Barack Obama, defining him a “universal spirit”, has said, “He was grounded in the struggle for liberation and justice in his own country, but also concerned with injustice everywhere.” President Joe Biden has said, “His courage and moral clarity helped inspire our commitment to change American policy toward the repressive Apartheid regime in South Africa. His legacy transcends borders and will echo throughout the ages.” British Prime Minister Boris Johnson has said, “He will be remembered for his spiritual leadership and irrepressible good humour.” Archbishop of Canterbury Justin Welby called Tutu “a prophet and priest, a man of words and action— one who embodied the hope and joy that were the foundations of his life.” 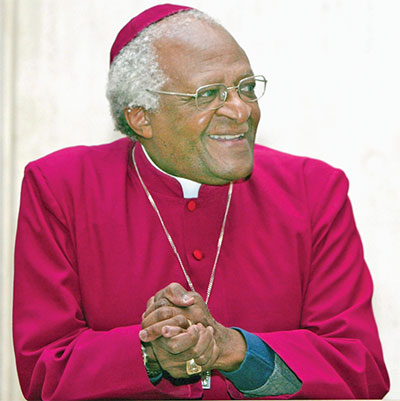 Desmond Mpilo Tutu was born on 7 October 1931 at Makoeteng, Klerksdrop in South Africa’s North West Province. His mother, Aletta Dorothea Mavoertsek Mathlare, had the strongest formative influence on his life. His father, Zachariah Zelilo Tutu, was a school teacher. Mpilo Tutu was educated in South African missionary schools at which his father taught. Though he wanted to take a medical career, due to financial inability he opted for teaching career. He started his career as a schoolteacher in 1955. But, he had to resign his post in 1957 in protest of government restrictions on education for black children, the Bantu Education Act.

Leaving teaching profession, Tutu attended St. Peter’s Theological College in Johannesburg and was ordained an Anglican priest in 1961. He obtained an M.A. from King’s College London in 1966. From 1972 to 1975, he served as an associate director for the World Council of Churches. He was appointed dean of St. Mary’s Cathedral in Johannesburg in 1975, the first Black South African to hold that position. From 1976 to 1978, Tutu served as bishop of Lesotho. In 1978, Tutu accepted an appointment as the general secretary of the South African Council of Churches and became a leading spokesperson for the rights of Black South Africans.

In a biography on Desmond Tutu, the writer John Allen wrote “We know in retrospect that the apartheid resistance movement was successful and that South Africa, though not without its problems, today faces an infinite brighter future than it might if it had not been for the efforts of Desmond Tutu, Nelson Mandela, and other leaders.” He said, “Tutu's campaigning was that of democracy, human rights and tolerance, to be achieved by dialogue and accommodation between enemies.” Tutu believed that the apartheid system had to be wholly dismantled rather than being reformed in a piecemeal fashion. On the other hand, Tutu never became anti-white. In his speeches, he stressed that it was apartheid – rather than white people – that was the enemy.

Desmond Tutu, known affectionately as “the Arch”, was one of the primary voices in exhorting the South African government to end apartheid, the country's official policy of racial segregation. After apartheid ended in the early '90s and Nelson Mandela became President of the country, Tutu was named chair of South Africa's Truth and Reconciliation Commission.

Tutu, in general, responded to invitations from churches or human rights lobbies, to make one-off visits designed by his hosts to help them achieve wider, long-term objectives, particularly for the establishment of peace. He did not visit the neighbouring African countries only, but also countries of other continents where people were suffering from various types of oppression. Some of those events are mentioned here.

When he travelled across the Africa continent for the Theological Education Fund, he was seen to say, “It pains us to have to admit that there is less freedom and personal liberty in most of independent Africa than there was during the much-maligned colonial days. The gospel of Jesus Christ cannot allow us to keep silent in the face of this… We must be committed to the total liberty of God’s children, politically, socially, economically… This is most obviously so far your sisters and brothers in South Africa, but it would be true too for many in independent Africa for whom all that seems to have changed is the complexion of the oppressor.”

While travelling to Zaire in 1989 to help the churches step back from the close relationship with Mobutu Sese Seko, Tutu addressed the theology students in Kinshasa saying that the Bible was “the most revolutionary book in a situation of oppression” and God was on the side of the oppressed. That time, due to tension between Mobutu and students, the venue of congregation was changed from stadium to the Parliament ground, but the parliament complex was surrounded by iron fences and the congregation of 15,000 people by troops. However, Tutu condemned Africa’s violations of human rights and its military dictatorships.

Tutu, while visiting Ethiopia, had said, “God is a God who sides with the hungry and the poor and the marginalised, and so we are able to tell the powerful everywhere, we tell the oppressor everywhere… ‘Watch it! Watch it! Watch it!’ Because God comes to deliver!” During Clinton administration, Tutu visited Washington in connection with the United States’ announcement of recognition of the Angolan government. In 1994, he went to Liberia to talk to the warlord Charles Taylor and said that if South Africa could settle its problems, so could Liberia. We know that Taylor became President in 1997 and was ousted in 2003 with charges of war crimes and crimes against humanity.

In 1995, Nelson Mandela sent Tutu to Nigeria to talk to military dictator General Sani Abacha to release the winner of the country’s annulled 1993 election, Mr. Abiola and the former head of state Olesegum Obasanjo. However, the mission, like others, was unsuccessful. In the same year, he went to Rwanda, when two rival groups Hutu and Tutsi were engaged killing each other.

Outside Africa, Desmond Tutu’s urges to the governments were centred on negotiation for peaceful settlement of all disputes or problems. He was seen engaged in the Northern Ireland issue. Tutu condemned all violence from whatever quarter. He continued with an appeal for negotiation to be inclusive, “Don’t let any feel they have been left out. Any group, however small, which has grievances, real or imaginary, must not feel excluded; otherwise you can kiss good-bye to peace.”

Regarding Palestine, he said, “I have to say I find it very, very difficult to understand Israel’s policy in this regard. I do not know all the factors that are involved. My position is made more difficult because of two factors. I am Christian, many of the Palestinians are Christians, in fact many are Anglicans, and their anguish tears my heart apart. Secondly, it is because I am a black South African, and if you changed the names, the description of what is happening in the Gaza Strip and the West Bank could be a description of what is happening in South Africa.”

During American and British preparations for war against Iraq, he said that it was “mind-boggling” to conceive of Prime Minister Tony Blair as aiding and abetting George W Bush. Later, while talking to Condoleezza Rice over telephone, Tutu urged that the United States should not go to war without a resolution of the UN Security Council; absence of such a mandate would be immoral.

The souls, like Desmond Tutu, never die. They are the rarely-born advocates of human freedom, national independence and justice. The rabble-rousers for peace remain in the hearts of the peace-loving people of the world for ever. They will be in our minds and thoughts and give us strength when we have to face similar challenges they had faced. His Holiness, the Dalai Lama said, “Archbishop Tutu’s objective of seeking ‘a democratic and just society without racial divisions’ is not only applicable in South Africa, but wherever there are human beings.” Let’s pray that his soul rests in eternal peace.