Our national flag is the greatest monument of our independence and sovereignty. Today, the national flag is the main carrier of our identity all over the world. Then comes the national anthem. The presence of the Father of the Nation, the architect of Bengal, is still testifying to the fact that every single institution of this country, which was formed by the touch of his hand. His daughter, Prime Minister Sheikh Hasina, is taking this state to the highpoint of development with the ideology.

We are celebrating the golden jubilee of independence and victory in 2021 under the leadership of Prime Minister Sheikh Hasina, the worthy daughter of Bangabandhu. Let a non-communal, self-reliant and poverty-free Bangladesh be built on the spirit and ideology of the war of liberation. The month of victory has brought new significance to the life of Bengalis. On the golden jubilee of victory, Prime Minister Sheikh Hasina administered oath to the people. The whole nationhas taken the oath to sharpen the spirit of the war of liberation and to brighten all the citizens with a new commitment. The Bengali nation has established its distinct culture in the heart of the world. 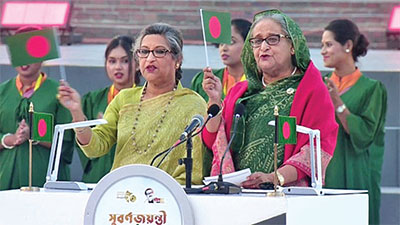 Oath of Golden Jubilee and Mujib Year: ‘Bangladesh has achieved independence through a bloody liberation war against the exploitation and deprivation of Pakistani rulers under the leadership of Father of the Nation Bangabandhu Sheikh Mujibur Rahman. The Bengali nation has established its distinct civilization in the heart of the world. Today, on Victory Day, I swear that I will not let the blood of martyrs go in vain - I will love the country, I will use all my strength for the overall welfare of the people of the country. I will build a golden Bengal of developed, prosperous and non-communal consciousness in the ideology of Father of the Nation Bangabandhu Sheikh Mujib. May the great Creator help us. '

This initiative is fancy, exciting and promising. We hope that the Bengali nationalist consciousness and ideology will be transmitted to the younger generation through this event. Motivation to inspire future generations to uphold the freedom, sovereignty and victory achieved through the war of liberation. The spirit of liberation war will be sharpened again among all including the new generation. The new generation will know whether our independence has been achieved in a bloody war against Pakistan based on great ideals. To make this achievement meaningful, we need to know and inform everyone about the great hero of independence Bangabandhu Sheikh Mujibur Rahman and the war of liberation. We must pass on the spirit of the great liberation war from generation to generation. May this be our pledge on this auspicious occasion of the golden jubilee of victory.

Through the war of liberation, we got an independent state for ourselves. That state is based on democracy, social equality and the exercise of fundamental rights. We are anointed with high status as an independent nation. The consciousness of the liberation war is to realize the history of the political struggle and sacrifice through which this state of Bangladesh was born. In this consciousness there is the idea of realizing democratic demands, there is the dream of liberation and there is the value of not discriminating between people. On the other hand, Bengali nationalism, democracy, non-communalism, equality and human rights are some of the inspirations of our progress which is the main element of the spirit of the liberation war.

We need to do more about the existence of Bangladesh and the effectiveness of philosophy in the minds of the youths. The new generation is not lost ideologically, we also have to do a lot for the youth ethnically. In all countries, the state is moving towards development and progress at the hands of the young generation at all times. The contribution of the young generation in the creation of independent Bangladesh is one hundred percent. But when you look at many of the youth of this land, that historical truth also turns into a false mirage! It is difficult to imagine the future of Bangladesh with some youth who have deviated from the norm; and that is why we have to work now.

The Father of our Nation, the great architect of the state of Bangladesh, the great leader of the freedom struggle, the greatest son of all time, the great hero Bangabandhu Sheikh Mujibur Rahman has always held the seat of our dignity. The undisputed leader of Bangladesh, Bangabandhu Sheikh Mujibur Rahman, because of his visionary leadership, realized at the beginning of March 1971 that war against Pakistanis was inevitable. Therefore, on March 7, 1971, he instructed the people of Bangladesh to jump into the war of liberation. The people of this country jumped into the people's war in response to the call of Bangabandhu. Through 9-month of heroic struggle, sacrificing the lives of 3 million people and paying respect to two lakh mothers and sisters brought liberation. The Pakistani invaders surrendered on 16 December.

As proud citizens of Bangladesh, we have free movement all over the world. Bangabandhu's contribution is all that we take today on the development highway by overcoming the various adversities around. If we did not get an independent country, we would still have to be crushed in the mill of Pakistan. We can think of everything independently because we have got an independent country. Our success in various indicators of society and economy has become the focus of the astonishing attention of the world, which has been made possible by the welfare of Bangabandhu.

Bangladesh has made significant achievements in poverty alleviation, GDP growth, food production, power generation, women empowerment, life expectancy, education rate, transition to developing countries, construction of Padma bridge, development of physical infrastructure including metro rail. With the launching of Bangabandhu Satellite-1, the red-green golden Bengal has conquered space. Internet services have reached remote villages as part of Digital Bangladesh. Mobile phones in hand, which has brought a groundbreaking change in communication. The latest Five-G technology has already been launched. The country is moving at a relentless pace on the path of implementation of Vision-2021 and 2041.

We have won the great war of liberation. We are a victorious nation. As a victorious nation, we will not bow down to anyone in the court of the world. By utilizing all the resources, we will be glorified in the world assembly, we will build ourselves and we will walk along our ways. This will be an important step for the people of this country. In this way, our beloved motherland Bangladeshwill move forward with the role model of development.

The writer is a Research Fellow, Bangladesh NGOs Network for Radio and Communication (BNNRC)