Rare photographs of 1971-72 being exhibited

Samdani Art Foundation and Centre for Research and Information (CRI) have jointly organised the exhibition marking the 50th anniversary of Bangladesh’s Independence.

State Minister for Cultural Affairs KM Khalid inaugurated the exhibition at Gallery 4 of the National Art Gallery of the academy. 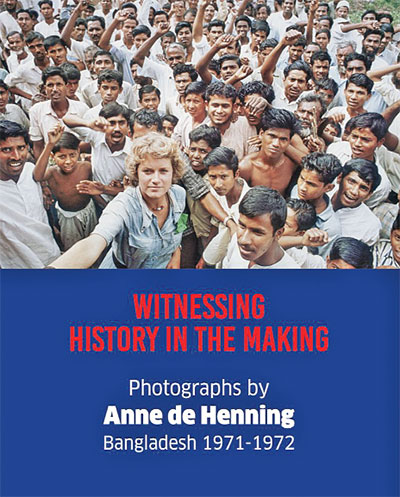 Curated by Ruxmini Reckvana Q Choudhury, the exhibition is showcasing Henning’s historical photographs captured between 1971 and 1972. Her remarkable private archive of rare photographs is a unique record of the pivotal years that saw East Pakistan transformed into Bangladesh.

The exhibition will be open for all till December 31.

Anne de Henning began her career as a photojournalist and at the age of 23 she left Paris to cover the Vietnam War and later Bangladesh Liberation War. Her photographs from 1971 and 1972 taken in Bangladesh remained unpublished and are being shown for the first time after 50 years.

Traveling through the country during the Liberation War, her photographs captured life in the war zone – from freedom fighters to men, women and children boarding refugee trains and fleeing from their villages. In her powerful images the humanity of her subjects is combined with the grit of traditional photojournalism. Anne’s photographs taken during her second visit to Bangladesh in 1972 featured the Father of the Nation Bangabandhu Sheikh Mujibur Rahman.