Mahakal Nattya Shamprodaya organised the festival, marking the birth centenary of Father of the Nation Bangabandhu Sheikh Mujibur Rahman and the golden jubilee of Bangladesh’s independence.

The inaugural ceremony of the festival was held at the Nandan Mancha of the acdemy on Friday. 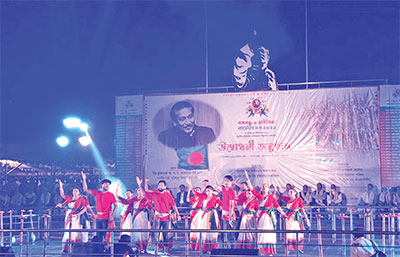 The organisers, guests and fifty freedom fighters who have contributed to the country’s cultural activism inaugurated the programme by lighting candles.

Besides, the organisers felicitated the freedom fighters, including Nasiruddin Yousuff, M Hamid, Mofidul Hoque and others at inaugural ceremony.

A total of twelve theatre troupes are being performed in the festival and all the dramas will be staged at the Experimental Theatre Hall of the academy.

Besides, theatre troupes Bunan Theatre, Dhaka Padatik, Bangladesh Police Theatre, Natyam Barishal and others will stage their plays at the event.

The festival will end on December 13.

‘The Dream of a Ridiculous Man’ at Shilpakala Academy today