CHATTOGRAM: Bangladesh Nationalist Party (BNP) Standing Committee Member Dr Khandakar Mosharraf Hossain has said there is no legal barrier to send the party Chairperson Begum Khaleda Zia abroad for better treatment, but the government is preventing to do it.

He made the comments while addressing a divisional grand-rally as the chief guest held on a convention hall premises in the city’s Bakolia area on Tuesday demanding release and treatment of Begum Zia.

The former health minister also warned that if Khaleda Zia is not allowed to send abroad for treatment, a movement to overthrow the government will be called from Chattogram. 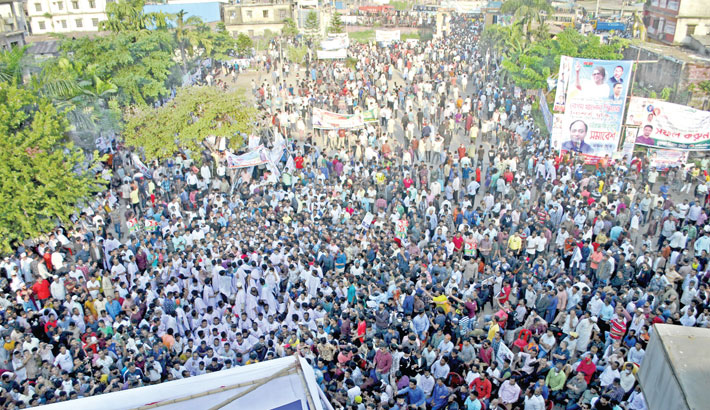 “Today's rally in the port city proved that Khaleda Zia will have to be released to get better treatment abroad", he said.

They will not apply for apologise to the President for treatment abroad, he said adding    that Khaleda Zia didn’t do anything wrong. Unconditional treatment facilities should be given as she was convicted in a fabricated case, he demanded.

The BNP leader said that the health condition of Khaleda is not stable for delaying to take a decision while the government will have to take immediate steps to send her abroad.

The government will see the power and supports of BNP, if they will give up the power arranging neutral election in the country.

Earlier, the stage of the rally broke down for loading over crowd around 2:45pm.

A good number of crowds in the programme made long traffic congestion from Shah Amanat Bridge to Bahaddarhat area in the afternoon, sources said.