Bangladesh national cricket team begins their second cycle of ICC Test Championship as a clear underdog against Pakistan as they started their preparation at the Zahur Ahmed Chowdhury Stadium in Chattagram on Wednesday.

The two-match Test series opener will begin at the same venue from November 26 and certainly, it will turn out as an acid test for the hosts considering their recent form and injuries that ruled out several key players like Tamim Iqbal, Shakib Al Hasan and Taskin Ahmed.

Unlike England, India, or Australia, who are clear favourites in their own den for Tigers it will be a different case altogether in the second cycle of Test Championship as their Asian neighbours will be testing their skills when they are on the hosts at their own backyard.

After hosting Pakistan, Bangladesh will take on Sri Lanka and India at home while they are scheduled to play New Zealand, South Africa, and West Indies in the away series of the second cycle.

Tigers always opted for spin web whenever they hosted teams like Australia and England but that ploy hardly will be good enough for them as their opponents are apt at handling slow balls while they are known for producing match-winning spin bowlers. 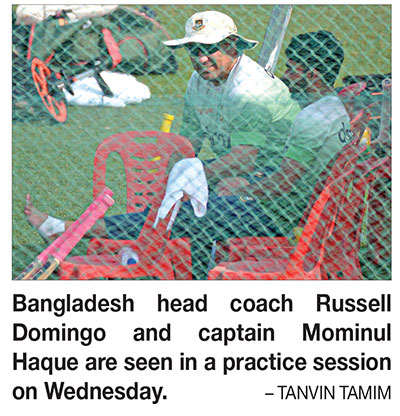 Mominul Haque, who missed one round of NCL for an ankle injury, was seen going to nets with his left ankle covered by tape can only make the team management lose their sleep over his fitness considering apart from him and Mushfiqur Rahim none of the batters have the experience enough under their belt to handle the pressure that is likely to be posed by their opponents.

While their batting and bowling will be tested considering Pakistan have some of the best batsmen in the business in a longer format game, the Tigers will be keen not to miss chances created by the opponents.

The exclusion of former fielding coach Ryan Cook only defines the recent performance of the fielding unit but that hardly changed in the three-match T20 series against Pakistan as they were found guilty of dropping catches that eventually made them pay heavily.

Meanwhile, Pakistan seemed to be determined to make the most of the preparation as Babar Azam and co spend a substantial amount of time in the nets and also individually with the willow.

All the pace bowlers in the Pakistan camp bowled for more than half an hour at a stretch only implied that they are getting ready to bowl long spells in the Test and their mindset of bowling short balls suggested their plan of action against Tigers in the opening Test.

Bangladesh most dependable batsman Mushfiqur Rahim was one of the most first men to arrive in the field and Pakistani cricketers did not waste the chance to see his batting from close range in the nets knowing his ability with the willow probably believing that getting him early would make their job easy against the hosts.