Shakib ruled out of first Test against Pakistan

Bangladesh ace all-rounder Shakib Al Hasan has been ruled out from the two-match Test series opener against Pakistan, scheduled from November 26.

Both teams reached Chattogram on Tuesday ahead of the opening Test that will mark the first series for the hosts in the second cycle of the ICC Test Championship. 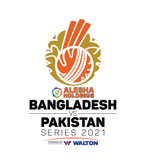 Shakib didn’t travel with the team and he is unlikely to take part in the opening Test in Chattogram due to his hamstring injury.

“Today Shakib completed his MRI and didn’t travel with the team and now he is expected to be Dhaka,” a member of the team management confirmed The Daily Sun on Tuesday.

Tigers' strength have largely been diminished due to injury problems as opener Tamim Iqbal has been ruled out from the series earlier while Taskin Ahmed is unavailable from the opening Test due to his thumb injury that he received during the last T20I game against Pakistan. Later, Taskin required four stitches and was ruled out for one week.

Pakistan T20 skipper Babar Azam is looking forward to taking the T20I series win momentum with them as they prepare to take on the hosts in the two-match Test series opener.

The tourists are riding high on confidence after clinching the three-match T20I series on a clear margin at the Sher-e-Bangla National Stadium on the back of all-round team performance.

“Moving forward we would like to keep the momentum (that we earned in the T20I series) in Test matches and we have experienced players in the Test team,” said Babar adding that he is happy to see how his teammates responded in the T20 series.

“I think it makes us happy to perform consistently. I think there is a team effort but firstly you have to identify where you are struggling and in our case, we struggled in fielding and the middle order and I feel slowly we improving in this regard. You can see how the boys are taking responsibility and now we are winning matches on the back of late order batting while we have improved as a fielding unit,” he said.

“In international cricket, the margin of error is very minimal and if you make mistakes the matches will be taken away from you. This group is very keen and they believe in each other and secondly, they are clear about the roles that are entrusted upon them by me and the management. They are executing the plans and they are fulfilling it and taking the responsibility and when a team does that consistently result is bound to come,” he concluded.