‘Include proper data on Dalit, Adivasi in census’

Speakers on Wednesday stressed the need for inclusion of proper data on Dalit and plain land Adivasi (indigenous people) in the population census 2021.

The backward people of the country are being deprived of their basic rights and benefits due to a lack of adequate information on the number of their population, dwelling areas, languages, religions and per capita income in the census, they said.

The speakers made the remark while addressing a discussion at CIRDAP in the capital.

Addressing the programme, noted economist Abul Barkat said the data on Dalit and plain land Adivasi was not included properly in the last census of 2011.

“The data of some 31.3 percent people was missing in the last census. If there is no complete data of the people, how the government will make development plans for them,” he said.

“There was only 0.2 percent allocation of the national budget for the ethnic minority people while there was no allocation to Dalit communities in the budget of the last fiscal year,” he added.

Stating various spectrums of discrimination, Barkat said, “People of the community cannot sell their land. When they need to sell land, they have to seek the permission from the deputy commissioner of the district. People of different communities are hiding their religious identity and using Hindu identity during the census so that they can sell land. Due to the discriminatory policy, it was impossible to know their number,” he added.

Bangladesh Pratidin Editor Naem Nizam said that the people of the backward section of the country should be brought into the mainstream.

“The government, as well as non-government entities, should come forward for their employment. We also need to make an arrangement for selling the products they grow,” he said.

Director of East West Media Group Limited and noted writer Imdadul Haq Milan said that writers and columnists should write about the issue.

“I have come to know about their struggle through the discussion. I will try to write a book focusing on their lives,” he also said. 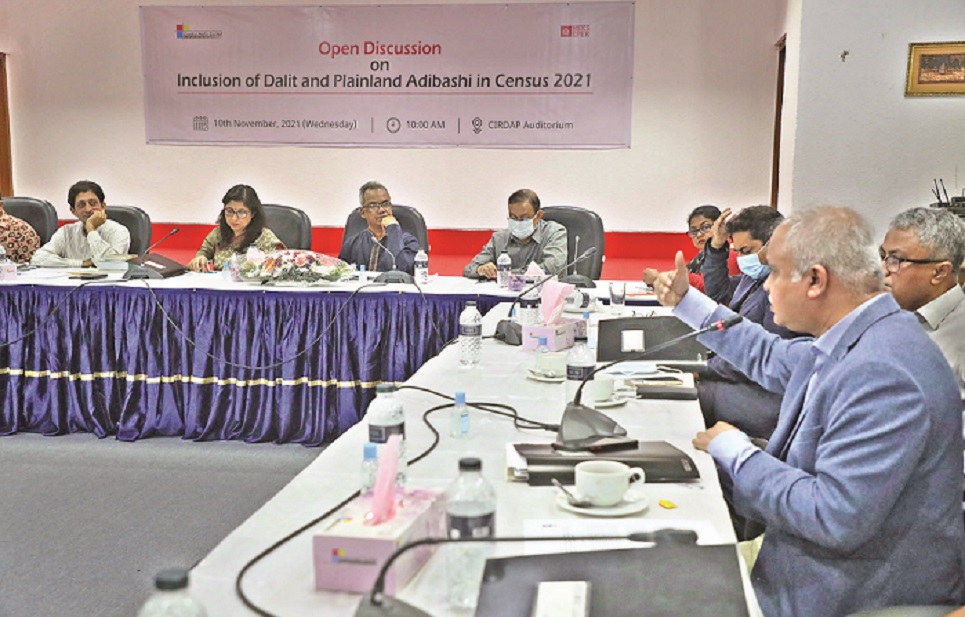 ‘Include proper data on Dalit, Adivasi in census’