In recent years Mali, a West African state, has been confronted by a profound crisis with serious political, socio-economic security and human rights consequences. Mali got independence in 1960 from French colonial rule due to ‘Tuareg’ aspiration movement. Even after being an independent and sovereign nation, shadow of colonial rule and the communal crisis of Mali were not resolved. The crisis stems from long standing structural pillars such as weak state institution and governance, fragile social cohesion due to ‘sense of deprivation’ among communities in the North part of Mali. These conditions were exacerbated by the recent factors of political instability, power imbalance, internal strife and inability to restore the situation by state owned security elements/army.

In this juncture ‘suppressed’ community of Northern Mali known as ‘Tuareg’ aftermath of ‘Arab Spring’ in 2012 revolted under the banner of MNLA (Movement National Deliberation de I’Azawad) and launched the ‘war of independence’ to create a new nation in Sahara called ‘Azawad’. Different international and regional Terrorist Armed Groups (TAGs) joined MNLA and started spreading and gaining control all over Mali. MNLA threatened and attempted to capture the capital city Bamako, triggered French Intervention in Mali in 2013, with an operational ingress called ‘Operation Serval’. Operation Serval could re-conquer the areas from MNLA control with the support from African Led International Support Mission in Mali (AFISMA). On 01 July 2013 United Nations Multidimensional Integrated Stabilization Mission in Mali (MINUSMA) took over the authority on 25 April 2013 from AFISMA based on UN Security Council Resolution (SCR) 2100. In June 2015 the government and the ethnic Tuareg rebels signed a peace deal which is known as ‘Algiers Peace Accord’. MINUSMA basically deployed in four most conflicted regions namely Mopti, Timbuktu, Kidal and Gao in Mali with Mission/Force Headquarters in capital city Bamako.

The operational environment of Mali is significantly different from traditional peace-keeping operations being conducted all over the world. Mali is typically characterized by extremely rough weather in desert condition along with very unpredictable and insecure operational environment with frequent deadly attack threats by TAGs with Improvised Explosive Device (IED). Last but not least, being a land-locked and war-ravaged nation, Mali has an extremely difficult Line of Communication and lacks infrastructural facilities. On that note, conducting MINUSMA operational activities is further compounded with logistics problems in terms of sustenance, mobility and re-supply of stores. Initially MINUSMA was established to support political process in Mali and carryout security related tasks. Later, on 25 June 2014 adopting SCR 2164, MINUSMA focused more on few aspects notably ensuring security and protection of civilians (PoC), assisting the re-establishment of ‘State Authority’, the rebuilding of the security aspects and finally promotion and protection of human rights in Mali. 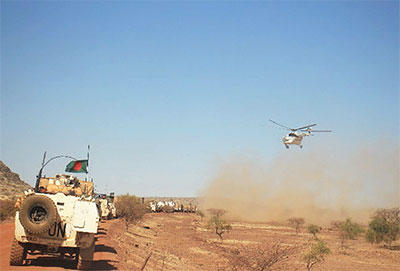 MINUSMA is responsible to maintain law and order in the country in assistance with other stakeholders. MINUSMA ensures PoC and freedom of movement of UN agencies and local authorities to deliver MINUSMA mandate. Contingents conduct various operational activities to deliver MINUSMA mandate making Operating Base (Camp). Contingents provide escort to UN logistics convoys for smooth functioning of logistics resupply and ensuring security of Main Supply Route. Check points, domination patrols day and night, key leader engagement and social / CIMIC activities are conducted by MINUSMA with the aim of showing UN presence in the trouble-shooting areas/localities. These activities ensure safety security and confidence among the inhabitants of Mali. However, the French forces deployed in Mali since 2014 are conducting anti-insurgent operation as ‘Operation Barkhane’. The dichotomies between the operation modalities of different forces at times created a chaotic environment in implementing peace process.

In the context of such deadliest attack and upsurge, comprehensive measures are undertaken by MINUSMA and IFs to curtail the probability of terrorist attack. The countermeasures include proactive actions as well as robust responses by UN security forces. Proactive measures ensured by fortification of Super Camp, satellite based ground surveillance system, drone surveillance, area domination by force protection, extra vigilance in post duty, conducting routine air patrolling and so on. On the contrary, MINUSMA and IFs project robust responses immediately being engaged by TAG activities by launching quick reaction force, conducting special operation on the spot or close vicinity of the incident. Operation group conduct ‘Key Leader Engagement’, interaction with local population, CIMIC activities and collect intelligence in the process. Besides, as response to TAG attack on MINUSMA or IFs, special operations are conducted to curb miscreant activities basing on specific intelligence. Robust posture and appropriate responses by MINUSMA aimed to transmit a strong message to the TAGs to refrain from launching any miscreant activities.

Operation SEKA is conducted throughout the year to restore peace and stability and ensure UN presence in North-Eastern Mali-Niger bordering area. Making TOB in ANSONGO – LABAZANGA area after conducting successful operation round the year the terrorist activities of the said area came to almost ‘zero level’, which was duly appreciated by all concerned.

Supply of logistics to different camps of ANSONGO-MENEKA area is always a daunting task due to constant IED attack in this MSR by TAGs backed by ISGS. BANBAT-7 performed the operational task successfully without any casualty of UN personnel or stores. IED was detected on 06 November 2020 and 23 May 2021 respectively by BANBAT ‘Search and Detection’ team in this Operational route, which could save valuable life of peacekeepers. More so BANBAT-7 operation group repulsed attempted attack by TAGs in several occasion during conduct of UN logistics convoy escort operation.

In January 2021, BANNAT-7 was tasked to deploy one of its company size troops under ‘Operation MONGOOSE’ to assist operations to neighbouring Sector (Centre). Gao-Douentzaroute treated as deadliest due to constant IED finds and IED explosion on the way to sector East to Centre. On 27 January 2021 TAG launched a complex attack immediately after an IED explosion on BANBAT-7 convoy near Douentza (400 km away from Gao). Operation group of the contingent fought valiantly upon being attacked by TAGs and forced to fly away in retaliation. Three military personnel were wounded and an armour vehicle was severely damaged due to that TAG attack. The fearless response and fight back of BANBAT-7 proved the courage and velour of Bangladeshi peace-keepers. Operation MONGOOSE (51 days duration) exhibited professionalism and heroic action of BANBAT-7 members, which was duly recognized by MINUSMA and top military leadership of Bangladesh as well.

Immediately after deployment of this contingent, there was a ‘Military Coup’ on 18 August 2020 in Mali, which caused instability and insecure environment. A large group of TAG attempted to enter and take control of Gao city immediately after the coup. At that juncture, through day-night patrols and communication with local leaders BANBAT-7 could restore the situation and saved the locals from a probable massacre. In March 2021, this contingent established a strong security arrangement in Bourem (70 km away from Gao) under ‘Operation Swan’ and enabled the ‘State Authority’ reinstated after seven years.

Despite numerous challenges and constraints, BANBAT-7 is successful in delivering UN mandate of MINUSMA. Pioneer Female Community Engagement Team (FET) of this contingent for the commendable performance received an award from MINUSMA leadership. SRSG and Force Commander, MINUSMA have acknowledged the performance of contingent with high notes awarding prestigious “Force Commander’s Commendation” to BANBAT-7. Bangladesh peacekeepers have won the heart and mind of Malian people by their devotion, professionalism, impartiality and dedication.

The writer commanded the Contingent (BANBAT 7) in MINUSMA; is presently serving in Area HQ Ghatail as Colonel Administration.