A human chain was formed in the capital on Monday demanding judicial inquiry into irregularities and corruption committed by the Azim-Kashem syndicate as well as militancy patronised by the clique at North South University (NSU) to save the private university.

Protection for Legal and Human Rights Foundation arranged the programme in front of the University Grants Commission (UGC) in the capital’s Sher-e-Bangla Nagar area.

The speakers portrayed irregularities and corruption committed by NSU Board of Trustees chairman Azim Uddin Ahmed and  trustee MA Kashem.

They urged the government to form a commission, headed by a retired justice of the Appellate Division of the Supreme Court, to investigate the allegations, according to a press release.

The speakers said the Azim-Kashem syndicate purchased land for the university at a high price than the actual market price, did commission business with the developer company, took sitting allowance of Tk 1 lakh, received the same amount of regular allowance for attending online meetings, kept Tk 408 crore as FDR in the bank owned by them in violation of the rules, enrolled students several times higher than the approved ones disobeying the UGC instructions and opened additional departments.

The syndicate members are also using luxury cars spending students’ money, they said, alleging that the perpetrators took the university to the brink of destruction through committing irregularities and corruption.

The speakers also said though NSU has repeatedly denied the allegations of militant patronisation, its recent activities have exposed their old face.

The decision to re-admit militant Nafis Imtiaz, a convict in the blogger Rajib murder case, has created panic in everyone’s mind, they said.

The participants said the clique, led by Azim Uddin and MA Kashem, is responsible for everything. The other members of the syndicate are founding members Benajir Ahmed, Rehana Rahman, Mohammad Shajahan and Aziz Al Kaiser Tito.

They demanded that the bank accounts of the accused be frozen, if necessary, for the sake of proper investigation.

The speakers at the human chain claimed that no effective action has yet been taken although repeated complaints were lodged with different government departments concerned.

Mentioning that procrastination by the Anti-Corruption Commission, UGC and other agencies may invite a disaster for the state, they demanded a judicial inquiry into the allegations.

After the human chain, a memorandum containing eight-point demand was submitted to the UGC.

The demands include running NSU in accordance with the UGC rules, relieving all the members of the Azim-Kashem syndicate from all kinds of financial institutions, imposing a travel ban on Azim Uddin and MA Kashem and their arrest, proper investigation into all financial irregularities and corruption and freezing the bank accounts of the syndicate members, appropriate explanation for the re-admission of blogger Rajib murder convict Nafis Imtiaz and investigation into militancy patronization and recasting the university administration saving it from the nepotism of the Azim-Kashem syndicate. 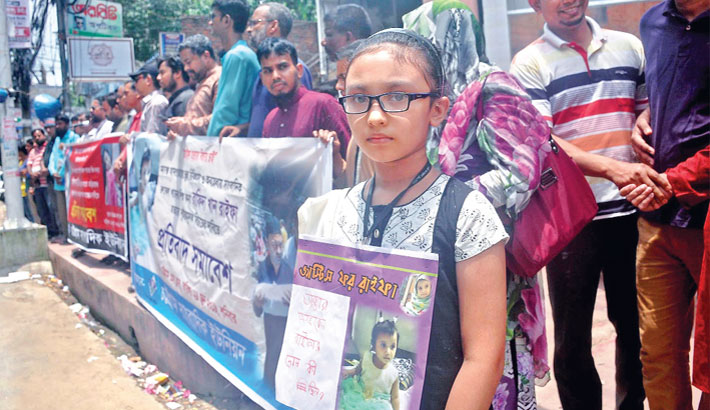 A new world order and India

Wild plants grow on Khilgaon flyover in the capital due to lack of maintenance by the authorities concerned. The photo was taken on Friday. – Md nasir uddin