Incitement to Communal Conflict: Whose Purpose Is Being Served?

It's been more than three weeks since that mysterious misdeed happened, but the remnant of the mischievous act still prevails. Discussions, criticisms, and multidimensional analysis of the event and the events behind the events - all kept continuing. However, it can be said confidently that Bangladesh has managed the initial push well. The group of vultures, behind the scenes, wanted a thunderstorm of bloodshed between Muslims and Hindus in the country. And they will happily eat the flesh of the corpse in divine bliss. With the vigilance of the government and the people of the country, their hopes remained unfulfilled --- at least to some extent.

Almost 90 percent of the people in this country are Muslims. The remaining 10 percent are mostly Hindus. Traditionally, the people of this country are non-communal. Although both Hindu and Muslim communities are quite loyal and devoted to their respective religions, they have been coexisting peacefully for ages. Occasionally there was a slight commotion, but it never turned into a riot. The only exception was 1971 when a large number of Hindus were forced to leave their homes and seek refuge in neighbouring countries to save their lives. However, the Pak aggressors were responsible for it, not the Muslim community in the land.

The reckoning of the opportunistic rogues was clear. Place a copy of the Holy Quran on the feet of an idol in some Puja pandal. Then provoke the Muslim community by going live on Facebook. There will be riots everywhere. However, there had been something in this society to prove this calculation wrong and that was nothing but the traditional non-communal character of the people of this country. Although there was some tension in the districts surrounding Comilla where the incident happened, none of the government, the opposition, the right-wing, left-leaning, or even the well-known religious groups, supported it. In addition, various organisations gathered in different places in support of inter-communal harmony and gave a clear message that communal bigotry will find no room in this country. The commotion in Rangpur, far away from the scene, was somewhat intriguing. Many feel that as the administration set up strict security cordons in Comilla and surrounding districts and the mischievous group failed to take advantage of the situation, it chose this far-flung district to achieve its objectives. 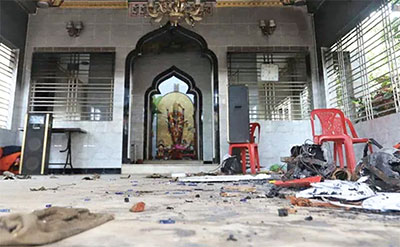 However, some questions remain. While the OC of the nearest police station was busy picking the Holy Quran from the spot, a person not far away was doing it live on Facebook. Was the OC aware of it? Wouldn't it have been wise if he had considered the kind of reaction that would have resulted from such an incident being spread on Facebook? It was necessary to arrest the man right away. Could the local administration have tightened security a little faster to control the tension in the area and in the surrounding districts? Was there an opportunity to avoid the casualties at the hands of the law enforcement forces in Hajiganj? Could political and social organisations of the area have taken more quickly an effective attempt for easing tensions? Could a counter-statement have been issued by the people in responsible positions on an urgent basis for maintaining peace and order in the face of provocations on Facebook?

There are some more frustrating aspects. Although the political and social organisations of the country, irrespective of the government and the opposition, expressed their strong support from their respective places in favour of communal harmony, they were critical of each other. Undoubtedly, the main responsibility of maintaining peace and order in the country lies with the government. The opposition also need to play a constructive role here. It is very clear, from the nature of the incident in question, that it was a well-planned conspiracy by some anti-state force, who chose the time of the biggest religious festival of the Hindu community in the country to create communal strife. It is not impossible as well that there was involvement of some external force against the interests of Bangladesh, who wanted to divide and weaken the country. Is it not necessary to forget, in such a situation, the political conflict and speak with one voice in the interest of the country?

Of particular concern is the fact that when everyone in Bangladesh, regardless of party affiliation, is trying to maintain communal harmony, the extremist communal forces of the neighbouring country are using the incident in Bangladesh to create communal chaos there. It was very much noticeable in the frontier states, especially Tripura. Subramaniam Swamy, one of the senior leaders of India's ruling party, called on the Indian government to invade Bangladesh in the wake of the recent communal clashes (The Week, October 18, 2021). In a letter to the United Nations, the UN High Commission for Human Rights and the European Union, Vishwa Hindu Parishad, a close ally of the ruling BJP, urged to set up an international inquiry commission to investigate into the recent violence against the Hindu community in Bangladesh, send a fact-finding mission and press Bangladesh government to ensure security, justice and compensation to the victims of the violence (India Today, October 23, 2021).

It is clear that communal conflict, neither in Bangladesh nor in India, will bring any benefit to the people in this region. Despite many changes at different times in the axis of power of this country, Bangladesh has never deviated in foreign policy from the principle of 'friendship to all, malice towards none' introduced by Father of the Nation Bangabandhu Sheikh Mujibur Rahman. Keep in mind, however, that this principle can only make sense for a country if it stands on its own two feet on a solid foundation. Only the overall unity of all the people irrespective of race and religion can give such a solid foundation to a country. Only when a nation is united can it dare to speak eye to eye to the outside world. In 1971, Bangladesh was able to defeat the well-equipped Pakistan army because of the steel-hard unity among the people of all walks of life under the leadership of Bangabandhu. The strength of the nation will depend on that same unity today as well. The unwanted wastage of the inherent power of the country and the nation in the communal conflict can only be desired by those who do not want to see this country in a strong position. The patriotic forces must always keep their eyes and ears open in this regard. Beware!

The writer is Professor and Chairman, Department of Pharmacy, Jahangirnagar University.