Days in Desert of Darfur

Suddenly at night, we heard sound of fire exchange from a nearby village. Shouting of locals created fear of uncertainty. We were stationed in a military camp at the midst of a desert and all members of the camp occupied their emergency designated post with arms as fire exchange increased. All lights of the camp were shut down. The situation was much tensed. Moreover, the adjacent helipad does not have night landing facilities to conduct evacuation. We saw a few bullets crossing over our camp. This was a frequent story as neighbouring Fur Tribes had easy access to arms and ammunition. They even opened fire for any celebrations like a marriage ceremony.

Again, on camels, horses and motorbikes, Arab militiamen stormed into the remote village firing wildly. Houses were pillaged, animals stolen and water tanks smashed. Villagers ran for their lives. These were very common.

Darfur is located at the eastern side of Sudan and this region is largely disrupted by armed conflicts. In April 2003, rebels took up arms and rose against the government, accusing it of neglecting the Darfur region. The government responded with a counter-insurgency campaign. More than two million people have been internally displaced in Darfur since the official deployment of the United Nations and African Union Hybrid Mission in Darfur (UNAMID) in January 2008. UNAMID is the successor of an earlier all-African peacekeeping force. In one side of this conflict is the Government of Sudan (GoS) military supported by police and the Janjaweed militia group. Whereas, the other side consisted of rebel groups like the Sudanese Liberation Movement led by Abdelwahid El Nur (SLM-AW), the SLM breakaway faction led by Minni Arko Minawi (SLM-MM), and the Justice and Equality Movement (JEM) headed by Jibril Ibrahim. A big portion of rebels are recruited from non-Arab Muslim ethnic groups namely Fur and Zaghawa. The present conflict also involves disputes and control of livestock, land, agriculture and water access. Security and violation of humanitarian laws are also matters of deep concern. For better administrative control, Darfur is divided into three sectors namely West Darfur, South Darfur and North Darfur.

Bangladesh Armed Forces have participated in the task of peacekeeping in Darfur as well. Certainly, the peacekeeping operations are difficult, but Bangladeshi troops have not only been well adopted in an unfamiliar hospitable atmosphere but their humanitarian effort, discipline, human quality, and respect to local customs have made a name wherever they have served. Besides adherence to the UN Mandate, respect for human rights, neutrality and humanitarian services are part of our peacekeeping viewpoint. At present, Bangladesh is one of the largest contributors to UN peacekeeping operations.

Before landing in Darfur in February 2010, this region was quite unknown to me. My duty station was the Marla Team site in Sector South. It was located around 70 kilometers (km) south of Nyala, Sector South headquarter. This region had the largest population of Arab nomadic groups. Nyala is connected by road and rail, and air with Khartoum. Carjacking of UNAMID vehicles and kidnapping was a common phenomenon here. 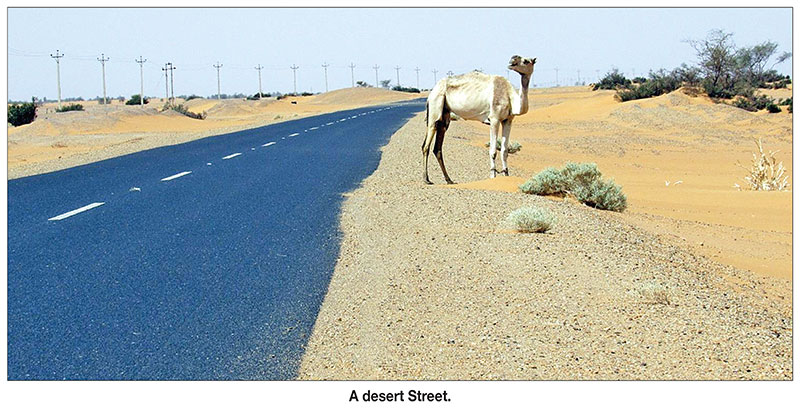 I was travelling with a patrol to reach my duty station. On the way, I marked horses, donkeys and camels are most popular means of journey among locals. Marla was located south of the railway line connecting Nyala with Khartoum. Wadi Burley, which is virtually a seasonal river, ran through this area. The journey was of approximately two hours. It was an isolated camp and most structures were temporary in nature. It took several weeks for me to be adapted to the hot and humid desert weather. I found members from various nations here.  Within a few days I could develop friendly relations with all.

The protection force members were from Nigeria and they were the majority. Nigeria’s population is almost evenly divided between Muslims and Christians. The official language of Nigeria is English owing to the influence of British colonisation. Many used to speak in Hausa language and I learned a little from them. Football is largely considered Nigeria's national sport and many used to play football almost in every afternoon. With them I also celebrated both Eids and Christmas in a festive mood. In Nigerian traditional societies, dance is the vortex of religious ritual and ceremony. We enjoyed traditional dances in various occasions. I marked Nigerian food consists mainly of rice, yam, plantain and beans. These are prepared and eaten with the various soup and stew recipes.

The baobab tree locally known as Tabaldi, an exceptionally large tree in neighbourhood caught my attention. It is a symbol of life and positivity in a dry and arid landscape. It is readily recognised by its enormous trunk, scrawny stems and twigs. During the rainy season, it absorbs and stores water in its vast trunk, enabling it to produce a nutrient-dense fruit in the dry season. This is how it became known as "The Tree of Life". They can live for up to 5,000 years. Locally, fruit pulp is made into juice and it has six times more vitamin C than oranges.

Cultivation and animal husbandry had a deep impact on the socio-economy of this area. Mostly cultivation could be done on the monsoon time which consisted of July and August. In that short span of time, mainly sorghum, millet, sesame, peanuts, other root crops, and vegetables are cultivated here. I was astounded after enjoying the cold and refreshing watermelon of desert. Collecting drinking water was a routine challenge here. Mainly, children used to travel long distances in search of water with their animals. Limited access to clean water had an impact on the hygiene and health of children in the villages. Lack of water has promoted the spread of water-borne diseases and also hampered children’s education.

This region is prone to lawlessness and banditry. There were approximately 28 villages in our region. The SLA had firm control over this area since 2004. They established checkpoints at the prominent places. Every day we used to visit a few villages as a team consisting of members from all organisations. Driving over desert sand was very tough. Recovery of a vehicle once stuck in loose sand or quick sand was really a tiring task. Besides patrolling, we had to accomplish all administrative tasks like cooking and vehicle washing by own self.

During patrol, we used to meet village leaders known as Umda or sheikh and locals. We listened to the sufferings of the locals which were multidimensional. Somewhere, we heard rebels attacked and looted villages including cattle. Many people and children were killed and villages were burned down during those attacks. Robbery and murder conducted as a result of the tribal conflict were very common. Moreover, lack of rainfall leads to significant food and water shortage. There were no medical and education facilities available in most villages. Sometimes, heavy monsoon rain destroyed houses and infrastructures. Lack of seed is another crisis for the farmers. We addressed their gender issues as well. Their demands were very simple. It covered water, food, and security. In some serious cases, we ensured medical treatment for sick persons and supply of medicine. Thereby, we could gain their confidence.

In April, SLA leader Minni Minawi visited our neighbourhood. He addressed a procession in Duldul village. After that, we had a small meeting. Minawi was the only signatory to the Darfur Peace Agreement. Likewise, several times we negotiated security issues with local rebel leaders.

On third November, we planned to conduct patrol in villages Tortan and Marfaeen located eastwards. When we were about to move out in the morning, we heard the sound of small arms fire, artillery and mortar shelling coming from the east side. Later, we knew that JEM rebels attacked a convoy carrying fuel and logistic supplies of GoS military. The battle raged near the railway line at the Tortan area. More than 50 GoS soldiers were killed in battle while dozens of others were injured. All casualties were evacuated to Nyala. Later when we reached at the spot, we traced a lot of marks of destruction. After this incident, GoS imposed movement restrictions on logistic vehicles for weeks together. It adversely affected the electricity production of our camp in hot desert weather. Sometimes, our routine activities were also hampered due to denial of access and restriction on free movement by GoS.

Banditry and burning of houses by rebels were also noticed. The affected used to flee. Most became IDPs (Internally Displaced People). Our robust activity in the area could keep the rebels at bay. Frequently, we had meeting with local police representatives.

There was no mobile network in our region. For communication, we were dependent on pin code phone with a lot of difficulties. There was a weekly patrol to Nyala. We used to go for shopping and talking to home. On the way, we used to cross Belail and Kalma IDP camp. Sudan has the highest number of displaced people in the world. Every day after returning from patrol, we prepared and sent reports to Sector Headquarter. These reports used to include problems and demands of concerned locals. It was very effective to draw the attention of all stakeholders on concerning issues.

Bangladeshi contingents deployed in Darfur also had numerous great achievements. UN gave me the unique opportunity of mixing and sharing views with people of various countries. The local people also liked us and they had a lot of interest in Bangladesh. However, still challenges are ahead as UNAMID completed its mandate on 31 December 2020.

The writer is a civil Engineer and a serving Military Officer