COP 26 is currently underway in Glasgow, UK. COP stands for ‘Conference of the Parties’. The parties refer to 197 nations that agreed to the United Nations Framework Convention on Climate Change at a meeting in 1992. This is the 26th time that the countries have gathered under the convention. Research suggests that every fraction of a degree of warming of the planet, the world will see more intense heat waves and drought and more deadly floods and wildfires. Humans have already heated the planet by approximately 1.1 degree Celsius since the 19th century. COP 26 needs to agree on some actions and their scale and speed for implementation in order to achieve net zero emission goals by 2050. This essay presents an analysis about the net zero emission targets.

In his book Hot Air Peter Stott mentioned that “The balance of evidence suggests a discernible human influence on global climate.” Though resistance to the scientific findings from the oil producing countries is an ongoing threat to climate scientists around the world, in 2019, the UK government legislated that the country must reach net zero greenhouse gas emissions by 2050. The Climate Change Committee in the UK says that this can be done by the combination of measures that include expansion of electricity generation by offshore wind power and other renewable sources, decarbonising the heating of buildings, the development of technologies to capture carbon emission and store them underground, changes in farming practices and electrification of transport with a phase out of petrol and diesels cars. But why the net zero emission is targeted? Why not zero emission? 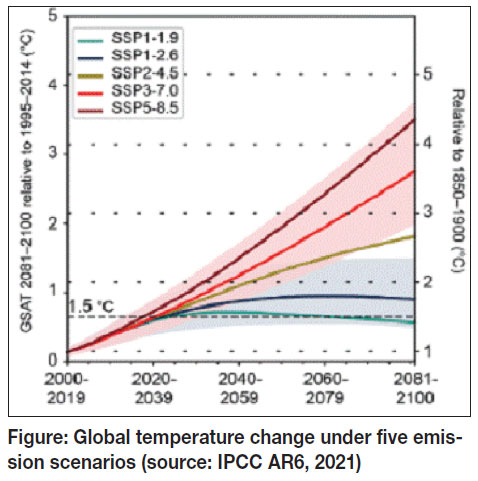 The idea of net zero emission scenarios has emerged from the expectation that under this emission scenario the global temperature rise will remain within 1.5 degree Celsius. However, please note that ‘net’ signifies that there is no plausible route to achieve zero emission through emission reduction alone. Hence ‘net zero’ has been setup as a goal.

According to IPCC’s Climate Change 2021: The Physical Science basis report, a set of five new illustrative emissions scenarios has been considered  to explore the climate response to a broader range of greenhouse gas (GHG), land use and air pollution. This set of scenarios drives climate model projections of changes in the climate system. These projections account for solar activity and background forcing from volcanoes. Results over the 21st century are provided for the near-term (2021–2040), mid-term (2041–2060) and long-term (2081–2100) relative to 1850–1900. The figure below shows the change of global surface temperature under five emission scenarios until 2100.

In case of high and very high GHG emissions scenarios (SSP3-7.0 and SSP5-8.5) where carbon dioxide emissions are roughly double from current levels by 2100 and 2050 respectively, global temperature will rise above 3.5 and 4 degree Celsius respectively. In case of intermediate GHG emissions scenario (SSP2-4.5), carbon dioxide emissions will remain around current levels until the middle of the century. Under this emission scenario, global temperature will rise between 2 and 3 degree Celsius. In case of scenarios with very low and low GHG emissions, carbon dioxide emissions will decline to net zero around or after 2050, followed by varying levels of net negative CO2 emissions (SSP1-1.9 and SSP1-2.6). Under this emission scenario, we can expect 1.5 degree Celsius or below global temperature rise. Emissions vary between scenarios depending on socio-economic assumptions, levels of climate change mitigation and, for aerosols and non-methane ozone precursors and air pollution controls.

In order to achieve the ‘net zero’ we need a strategy, which can hit the source of the problem instead of controlling the problem at the receptor level. We need to avoid greenhouse gas emissions in the first place, for example electrifying transportation or decarbonising the grid. We need to be more efficient in using the energy. This means that more output of energy is needed per energy input. We also need to incorporate some strategic approach of removing carbon dioxide from the atmosphere by natural and technological means, because there are some emissions that cannot be avoided and need to be captured back from the atmosphere and stored long term.

While considering nature at the heart of the strategy, I recall the German Philosopher Edmund Husserl, who used an ancient word ‘epoche’, for how we should suspend question like ‘what is real?’ and focus instead on ‘what we experience?’. This is true for climate change as well. Husserl is considered the father of ‘phenomenology’— a way of experiencing the world that concerned with focussing closely on everyday things as they appear to us. Like the protagonist in Sartre’s Nausea, I try to find a park bench and stare at a tree for hours if needed and embrace the ‘epoche’ of Husserl. That approach will allow us to realise what nature is and what it is for.

However, even if we consider nature and take into action ‘what we experience’, some critics think that some country’s reliance on gas is a barrier to its climate aims. Currently, prices of energy are rising in Europe. This may slow down the possible energy transition or this may accelerate the transition. It depends on how market will react. In the developing countries, transition from fossil fuel to green technology needs more time, because technology need to be available for them and the price of such technology should be cheaper than coal power. The United Arab Emirate produces about three million barrels of oil a day and the revenue runs the country’s economy, financing the government and helping their development. However, they realise that net zero target has a business case for it. They have agreed to host COP 28 and also the first Gulf country to pledge zero emissions. So, economy is a factor, which should not be ignored.

We should remember that setting targets is different from meeting them. So, net zero emission target is only achievable if we can setup clear strategy for achieving it. In his memoir Confessions, Augustine recounts that he would pray, “Lord, make me chaste—but not yet.”  In case of decarbonisation, we should not fall in the trap of such Augustinian approach by saying that ‘Lord, make me green, but not yet.’