Cigarettes are dangerous not only when they are smoked but also long after as cigarette butts are harmful for the environment. Most people think those cigarette filters are made of cotton but are actually made of a plastic material called cellulose acetate. Like all plastics it is resistant to biodegrading and can persist in the environment for generations. The positive move is that, the USA, Mexico, France, Korea, India and many other countries are recycling cigarette butts. These butts are being tossed from cars and shoes flicked into streets and dropped almost everywhere year after year. Cigarette butts are the most littered item in the world. Cigarette butts left on the road get washed into storm drains. They flow through them and end up in our lakes and rivers and ocean and wash up on our beaches; they poison our water and harm wildlife. Discarded lit cigarettes can also trigger wildfires.

There are trillions of cigarette butts littering our world at this moment, about 4.5 Trillion in fact. If that number seems a little hard to imagine, picture this: 600 cigarette butts for every single living person. What are these trillions of pieces of toxic waste doing? They are clogging our gutters, filling up our areas, polluting our oceans. Worldwide, smoking poses a direct threat to our forests, homes and parks, vegetation and property. It is estimated that 1.69 billion pounds of cigarette butts end up as waste each year. The production of cigarettes is very damaging to the environment. It is estimated that one tree is consumed for every 300 cigarettes produced – that’s one tree for every one and a half cartons.

Studies have shown that butts release the same toxic and cancer-causing chemicals that cigarettes do such as nicotine, ethyl phenol and arsenic. Tests have found that only one cigarette butt soaked in a litre of water for 48 hours produced enough toxic chemicals to kill most of the fish in that water. So a little butt has the capability to ruthlessly damage our aquatic ecosystems.

Ernie Simpson, the global Vice president for R&D for Terra Cycle developed a method to recycle cigarette filters. First he collects and processes the cigarette filters, in other words separating residual tobacco from the filters, washing to remove tar and smell from the cigarette filters. Cigarette butts are made of plastics called cellulose acetate, which is made by reacting papers, cellulose paper with acetone. The reaction of those two ends up being plastic. This is not only paper, this is also plastic. It doesn't disappear; it stays in the environment like every other plastic material. And it does not decompose. Next steps of the process: filter is turned into granules that can be used for fabricating other items. Process this material in an extruder and blend the cigarette filters with another plastic and melt it in this extruder. Then finally they create usable plastic with a brand of cellulose acetate and polyethylene. Then it can be used to make new products like plastic boards for making outdoor tables and chairs.

The recent innovation on building materials was made by RMIT University researchers led by Dr. Abbas Mohajerani. He invented brick by filter recycling. This brick is trouble-free to process, comparatively lighter and most significantly it is cost effective. India has been using this filter like cotton. For instance, they make soft toys, pillows and souvenirs. 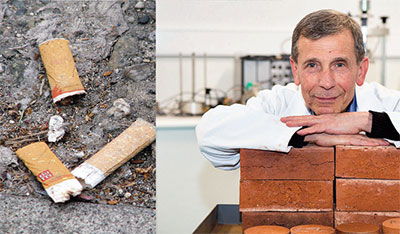 Although we have tobacco control laws, our people are reluctant to follow the laws. Many campaigns ran nationally in Bangladesh to show the dangers of second hand smoke and informed the public of existing laws prohibiting smoking at public places. Yet, smoking in public is not discontinued. That is why citizens should individually raise their voice to stop smoking in public places. In terms of the population of Bangladesh, smoking is also high. That is why its butts are also almost everywhere however, as like other litter we can collect it and recycle this harmful trash. Cigarette filter recycling processes are uncomplicated and doable. We need to fight together to save our environments. In Bangladesh we also should strongly reuse cigarette butts in a positive manner. Our government, private organizations and small business persons should give more attention to the recycling of cigarette butts, which would be an ambitious initiative. We need to recycle cigarette filters to really be a circular economy. The whole idea of recycling cigarettes butts taking it out of the environment and putting it back in the circular economy. Bright side is that cigarette filter recycling would have an epic transform on economic growth in Bangladesh.

The writer is a freelancer