The government’s vision 2041 lays emphasis on creating an innovation and knowledge-based economy, because the country’s growth so far has mainly been driven by labour advantage which may not generate enough thrust to propel it towards long-term development target.

In this age of information, knowledge is not only power, but also money. Properly nourished and nurtured, knowledge can become the key driver of economic growth. In a knowledge-based economy, the generation and exploitation of knowledge play the predominant role in the creation of wealth.

Facilitating a transition towards knowledge based economy – which requires investing in human capital, giving adequate budgetary allocation to education and research, facilitating start-ups with innovative ideas, adopting latest technologies, and re-skilling and up-skilling of the persons behind the wheels in every sector – will be the key to Bangladesh’s prosperity in the next decade.

In Bangladesh we have now over 100 universities, taking into both public and private ones. While the number is impressive in terms of quantity, its qualitative aspect is lacklustre, to say the least. There is a huge gap between the kind of skills that are required in the industry and the kind of graduates that are being supplied by our academia.

Therefore, we need to focus on transforming the universities from merely certificate-issuing factories to real places of learning and innovation. There is also a need for bridging the gap between the industry and academia through effective collaboration.

Whatever we want to achieve, the primary thing we need is knowledge about how to achieve it. Be it either formulating policies, exploring new opportunities, equipping factories with advanced technologies and software, or innovating new business and product ideas, knowledge is absolutely critical and has no alternative.

Since knowledge lies at the heart of all of our developmental efforts, we have to enhance the knowledge of future business leaders and mid-level professionals of the country. We have to extract knowledge about the best business practices, most-advanced technology and latest trends of the world of business and inject those ideas into our industry.

In this era of the fourth industrial revolution, disruptive technologies are frequently challenging conventional ways of doing business. That means the business world has reached an ‘evolve or die’ moment. The business enterprises that are not prepared to innovate and evolve will be left behind to lick their wounds, suffer the consequences of their mistakes and contemplate the opportunities lost.

Take the example of Bangladesh’s readymade garment (RMG) industry which accounts for 84% of our export earnings, and thus, is one of the mainstays of our economy. The robust growth of RMG industry over the decades has pleased us all. We can also take pride in the fact that Bangladesh is the world’s largest garment exporting country after China.

Bangladesh has also made great strides to compliance issues regarding occupational safety and legal requirements of global trades. However, in the face of accelerated pace of digitization and innovation in the global fashion industry and intense competition from Vietnam and India, our apparel industry sector can hardly afford to be complacent and go on with business as usual approach. The RMG industry has to ensure that it is both compliant and competitive.

At present most of our factories tend to replicate the design provided by retailers or buyers. It is about time we paid more attention to our own product development capacity because it helps with better negotiation and profitability.

To increase the sectors’ competitiveness through innovation and knowledge cultivation, BGMEA has set up Centre for Innovation, Efficiency and Occupational Safety and Health (OSH), which is a right step forward. The centre is expected to work to enhance productivity in the industry by enhancing knowledge and efficiency of all those involved in the manufacturing process. It will conduct regular training courses and workshops, and will also arrange periodic stakeholders’ gatherings to gather and disseminate ideas.

We think other export oriented sectors such as textile, leather and jute should also have a functional innovation centre which will work as a knowledge hub for product diversification, market expansion, productivity enhancement and business sustainability.

Digital Bangladesh is an integral part of the government’s Vision 2021 and Vision 2041. The Digital Bangladesh initiative includes: (i) Developing human resources ready for the 21st century, (ii) Connecting citizens in ways most meaningful to them, (iii) Taking services to citizens’ doorsteps and (iv) Making the private sector and market more productive and competitive through the use of digital technology.

Technologies like artificial intelligence, robotics, quantum computing and 3D printing have brought about radical changes in manufacturing to healthcare to agriculture. Use of these advanced technologies increases efficiency in service delivery and decreases waste as well. As a result, use of modern software and 3D sampling is increasing global supply chain. Therefore, it is vital for Bangladeshi companies to adapt to these global requirements of virtual sampling and proto-typing by increasing capacity building of our industries.

The rapid digitalization of Bangladesh has not only changed the shape of the country’s economy, with more and more services going online, but also leads to the rise of a large number of tech-savvy youths. Bangladesh has already become the second-largest supplier of online labour, according to the Oxford Internet Institute (OII). The country has over six lakh IT service exporters or freelancers, and the number of team-based freelancing companies hovers around 1,600. Together they fetch roughly $500 million annually. 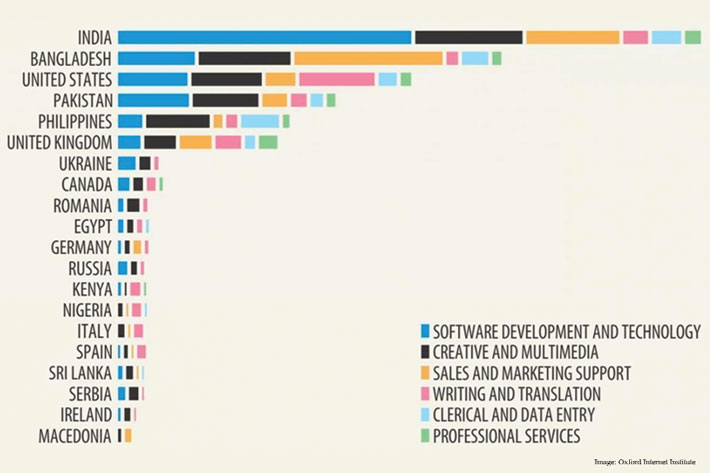 The government is establishing Hi-Tech Parks / Software Technology Parks / IT Training and Incubation Centres in different parts of the country to ensure skill development and employment of the huge number of youths. We can substantially increase our share in the global outsourcing market by turning unemployed young people into tech-savvy workers and engaging them in IT-based freelancing. It will make Bangladesh a key player in the global outsourcing market.

Internet and its implications have come to stay in our life. In the coming days, the penetration of this technology is going to grow and at some point perhaps the entire population of Bangladesh will use the Internet. The greater penetration will make the e-commerce industry bigger, which will require more innovative projects and skilled hands in the IT sector. At the same times efforts will also be needed to deal with problems like online fraud, hacking, bullying, pornography, proliferation of fake news etc.

Maintaining optimum productivity level is an imperative in any business venture because consumers demand higher value at lower price. To increase productivity, what factories need most are trained staff and advanced technology. A factory, however, cannot ensure higher productivity only by deploying cutting-edge technology; it needs trained manpower to man those machines.

Lack of efficiency has a direct bearing on the industry’s level of productivity.

Also, let us not forget that Bangladesh is expected to graduate from the least developed country group (LDCs) by 2024. Bangladesh exporters will no longer enjoy duty-free quota-free (DF-QF) market access in the European market from 2029.

So, in the face of losing preferential market access and the fourth industrial revolution, the importance of increasing efficiency cannot be emphasized enough. It may, however, turn out to be an opportunity for Bangladesh if it can rise up to the challenges and boost competitiveness of key economic sectors by addressing productivity lag.

Getting ready for industry 4.0

The industrial sector has undergone many transformations riding on the back of new ideas and invention. The first industrial revolution that began in the 18th century with the invention of steam power that mechanized production had changed the world by transforming business, economics, and society.

And now the fourth industrial revolution is building on the digital revolution that revolves around automation, artificial intelligence, quantum computing, big data, internet of things etc. which is expected to bring about a tremendous change in industries and the business world.

In this complex and evolving business environment, it is imperative for Bangladeshi entrepreneurs to introduce time-befitting technologies to ensure product quality and resource efficiency and as well as to do away with some of the manual and time-consuming practices.

The technological transformation, albeit slow, has already begun in various sectors including the RMG sector. Roughly 8% of jobs are automated in the RMG sector and by 2025 it is expected to reach 25%.

Although automation is feared to eliminate a huge number of jobs, it will in fact create more jobs than it destroys because it will help the business grow further which will require additional workforce. Then again, creating skilled manpower is a pre-requisite to harnessing the benefits of fourth industrial revolution.

However, this huge number of young human capital is still lacking necessary knowledge and skill to thrive in the competitive global market. We send millions of unskilled people abroad who are engaged in mainly blue-collar jobs. Our industrial sectors are thriving primarily because of cheap labour.

There is no denying that these unskilled labourers have greatly contributed to the economy. But now that we desperately want to achieve a higher level of development, investment in human capital development for a knowledge-based economy should be given top priority. If properly harnessed our youths with necessary skill and knowledge, our production priorities will shift from replication and imitation of simple products to innovation of high-end products, which will drive the economy like transmitters help power distribution.